If someone bumps your car from behind, be advised – it might be more than just a fender bender. It could be the prelude to something much worse. 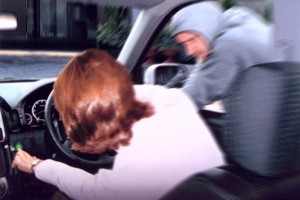 Apparently, there has been an uptick in robberies – and car jackings – that begin as innocent-seeming minor accidents. A car bumps into you, you stop, get out to see what happened – and become a victim of more than just someone else’s poor driving. See here for a recent example.

Most of all, pay attention to your gut. If something feels wrong, it may in fact be wrong.

Usually, these things start out as very light “love taps” – just enough to get your attention – and get you to stop/get out of your car. A significant impact is usually just an accident. Thugs want to steal your car, not wreck your car.

These scenarios also don’t usually happen in broad daylight, in the middle of the day, with lots of other cars – and potential witnesses – around. If you get bumped in stop-and-go traffic, it’s probably just what it looks like – another driver who wasn’t paying attention. Probably, it’s ok – except for the hassle and damage to your vehicle.

But if you are out late at night, and the only car on the road – and you find someone tailgating you – who won’t pass, even when you wave them by – be on guard. Especially if the other car contains a group of younger men. 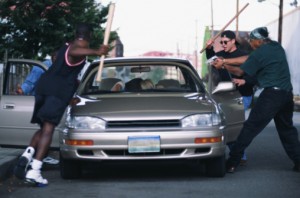 If, in such a situation, the other driver taps your car with his, it might be a good idea to keep on driving – with your blinkers on, at a reduced speed, thereby clearly conveying your intention to stop… eventually. When it is safe. Call 911. Tell the operator the situation. Explain that you are driving to the nearest police station – or at least, wll-lighted, well-traveled public space – and that you will stop there and wait for the police.

If the other driver is not up to something fishy, he’ll probably just follow you – and you can let the cops sort it out. But if the other driver is up to something, he’ll probably do one of two things: He’ll either cut bait and leave – or he’ll get really aggressive – and possibly try to cut you off or run you off the road. If the other driver gets aggressive, call the police – and do not stop/pull over under any circumstances. Don’t let the other car get in front of you, if possible. Because if he does, he’ll have an easier time of forcing you to stop. Try not to let him get beside you, either – so he can’t run you off the road. Drive as quickly as you feel you can and still maintain control of the car – flashing your lights and honking your horn all the way. Make a scene. Attract attention. If a thug is on your tail, this is the last thing he will want. Get to a populated – and lighted – area. If the guy’s a creep, he’s going to split as soon as you get there.

If he doesn’t – if he’s just angry because you didn’t stop immediately – keep your windows up (automotive glass is pretty hard to shatter) and your engine running – in case you need to make tracks fast – until the cops arrive. Don’t exit your vehicle. Don’t engage the other (angry) driver in conversation – other than telling him (or her) that you’ve called police and they’re on the way.

Then, let them handle it. 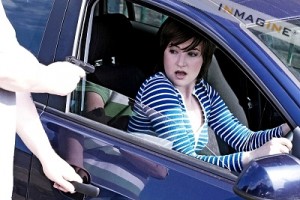 * Try to avoid driving in unfamiliar places without a full tank of gas – and a map (or cell phone).

* Keep a can of aerosol tire repair/inflator (e.g., Fix-a-Flat) in the car and use it to quickly get back on your way in the event of a flat tire.

* Avoid bad neighborhoods – especially at night – and especially if you’re driving a high-end car. This is the equivalent of a “kick me” – no, “rob me” sign taped to your car’s trunk.

* Carry pepper spray/mace – or (even better) a firearm, if you legally can and you know how to use it and are prepared to use it if you have to.

* Keep a “dummy” billfold or purse – with dead credit cards and maybe $20 or so in small bills. In an emergency, you can hand this over to the thug – instead of your real wallet or purse, with all your real credit cards and large amounts of money.

* When road-tripping, let your spouse, roommate or friend know where you’re headed and – roughly – what time you expect to get there. This way, if something happens along the way, someone will know about it sooner rather than later.