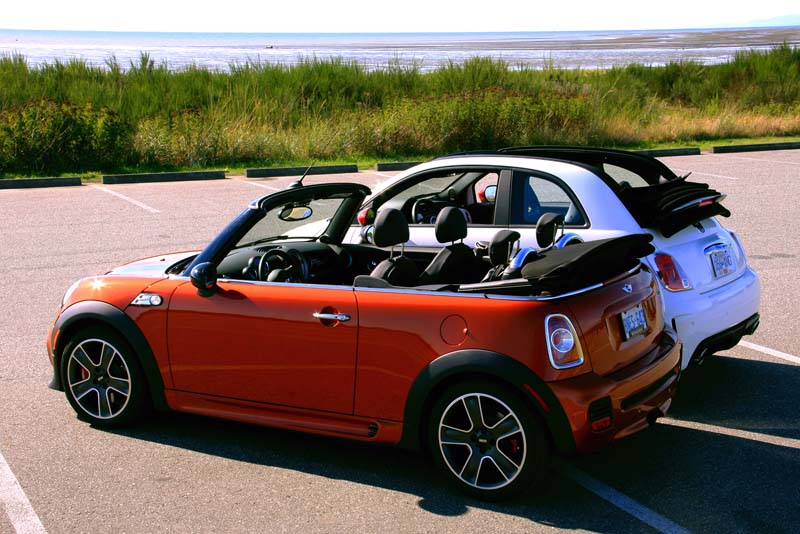 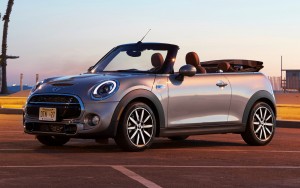 There are just two.

They are the Mini Cooper convertible and the even smaller Fiat 500 convertible.

Both are retro-cute, very fun and not (if you’re careful about options)  unaffordable.

But which of them to pick – and why?

The relative pros – and cons – may surprise you. 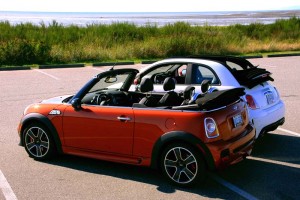 Both are perkier than a Dachshund on Red Bull and just as entertaining.

The Mini – focus of this review – is the pricier of the two.

Both cars can be ordered with a six-speed automatic.

There is also John Cooper Works (JCW) version, with a pumped-up (even more) version of the 2.0 liter four and suspension/wheel and tire and trim upgrades in addition. It lists for $35,600. 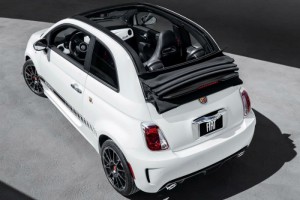 There’s also a high-performance Abarth trim – which (like the Mini S) gets a high-powered turbo engine but unlike the Mini S, the top-of-the-line Fiat only stickers for  $26,695 to start – or about $800 more than the price of the base trim Mini.

However, the Fiat “convertible” isn’t really.

It has a targa roof – the cloth center section can slide open but the sides are metal and fixed in place.

The “British” Mini is built by Germans (BMW) … and looks and feels it.

Base engine is small, but isn’t weak.

Neat three-position soft-top (it has a “sunroof” option in addition to all the way open and all the way closed). 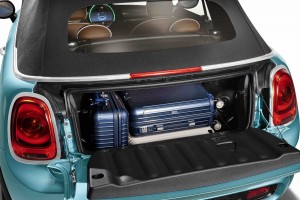 Would you believe that the Mini has less room inside (in the back seat and for cargo) than the much smaller on the outside Fiat?

Those options are pricey; it’s easy to spend $40k on a well-optioned Mini S. It’s impossible to spend more than $28,725 on a loaded Fiat 500 Abarth convertible (top of the line, with every available option). 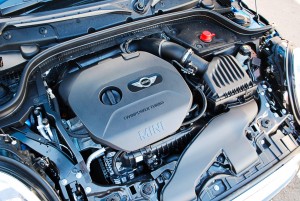 And they all “Motor Hard” – as Mini puts it.

The Fiat is, however about $5k less to start. 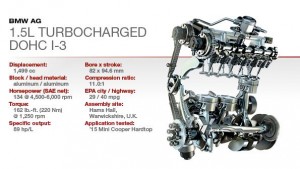 That buys a lot of gas.

But how much are the extra three seconds to 60 worth to you?

Unfortunately – but not unexpectedly – the mileage also drops:  23 city, 33 with the six-speed manual; 26 city, 33 highway with the six-speed automated manual. With just an 11.6 gallon fuel capacity, this version of the Mini seems thirstier than it actually is. 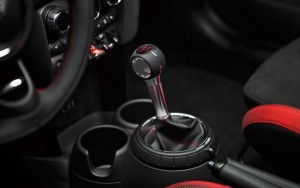 Fiat’s counter to the Mini S is the 500 Turbo – which adds a (surprise!) turbo to the 1.4 liter engine, goosing its output to 135 hp and 150 ft.-lbs. of torque. This is sufficient to run almost as quick as the base-engined/three-cylinder Mini – but the turbo Fiat’s 8 second to 60 run is still no threat to the standing of the Mini S.

Fiat’s riposte is the 500 Abarth, which (like the JCW Mini) gets a boosted-more version of the 1.4 liter engine, but power peaks at a comparatively disappointing 160 hp and 170 ft.-lbs. of torque, which gets the little Fiat to 60 in the same 7.1 seconds as the base-engined Mini.

But, the specs don’t tell the whole story. For that, a road test is required. 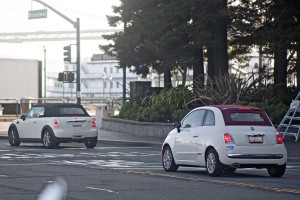 Especially the base-engined Mini. Which might just be the Mini to get.

The combination of very good performance – it feels even quicker than it actually is because it’s so small; like going down a steep hill at 30 MPH on a roller skate –  and excellent economy at a still-reasonable price is hard to gainsay.

As opposed to the base-engined Fiat, which is even more economical – and even more reasonably priced – but utterly outgunned.

The Fiat’s pushing 11 second to 60 Max Effort run is weak. There are maybe two new cars that are weaker – the Prius C hybrid and the Mitsubishi Mirage – and they’re supposed to be toasters. 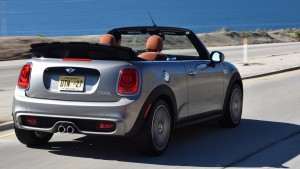 You’ve got to be on the ball to make up for the Fiat’s lack of thrust with anticipation and good timing. In close traffic, you’re ok because most drivers are Clovers and so not paying attention and rarely making use of the power they’ve got. If you get the drop on them, you can take advantage of open slots in traffic, the general obliviousness of other drivers.

But if you need acceleration and call upon the God of Thrust, he will not answer your supplications. And on the highway, the little Fiat is as out of its depth as Jeb! making a run at Donald.

The Mini – the base-engined Mini – isn’t. It has about the same power-to-weight ratio as a Mazda Miata and performs accordingly. It has reserves, something the Fiat doesn’t. 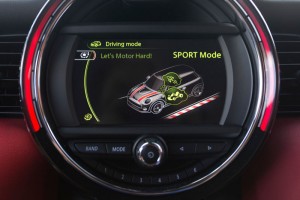 It also has wheelbase – 6.5 inches more wheelbase (97.1 inches vs. 90.6) than the Fiat, which is 4.1 inches taller, too (59.8 inches vs. 55.7 inches). The combo of short wheelbase and tall profile makes it more susceptible to being batted around by crosswinds than the Mini.

That said, driving the Fiat – the Abarth Fiat – is like saddling up an old Kawasaki two-stroke triple. Just without the smoke. It is a belligerent little thing, its exhaust popping (and waste gate snapping), with nearly 30 pounds of boost pressurizing the 1.4 liter engine to near-explosive levels. The Mini S will still outrun it, easily – but the Fiat makes the run more thrilling. God (and the people who wrote up the warranty coverage) only knows how long the Fiat’s pressure-cooked engine will hold up, of course.

I’d pick the standard-engined Mini over either. 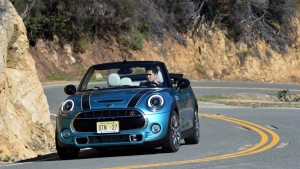 It strikes just the right balance between power/performance and economy – both to buy and to operate. It’s also, arguably, the most fun. Working that little three cylinder turbo fosters a closer, more intimate relationship between you and the car.

It also, arguably, fits the car.

The Mini S – which touts power and speed – is quicker but not nearly as quick as other medium-warm and comparably priced convertibles like the convertible versions of the Chevy Camaro and Ford Mustang. They are larger (much larger) cars but their performance (0-60 in just over 5 seconds with their four cylinder engines) is much better than the Mini’s – and their prices are about the same, inviting cross-shopping.

The regular Mini, on the other hand, is just quick enough to be fun and vastly superior to almost-oafish in comparison plus-sized convertibles like the Camaro and Mustang as far as Froggering through traffic. 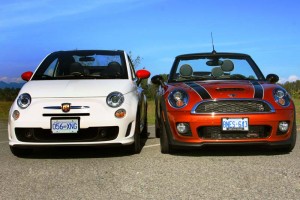 There is no liking the Mini.

People tend to either love them … or not.

Same goes for the Fiat.

You are either cool with being in just about the smallest thing on four wheels … or you are not. If you are, the smallness of these cars is a big part of the allure.

Depending on where you sit – and how much you need to carry. 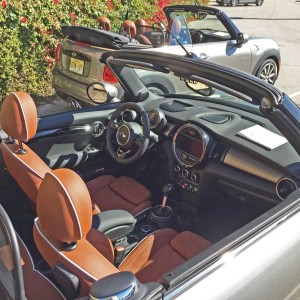 But the Mini and the Fiat’s back seat (and trunk) is another story. Several different stories.

On the one hand, the Fiat seems to have a more passenger-friendly rear seat, with 31.7 inches of legroom (vs. 30.9) for the Fiat. This is more than in the Mustang convertible (30.8 inches) and much more than in the Camaro convertible (GM is so embarrassed about this stat that it doesn’t even publish the stat, but it’s around 27 inches).

However, there is a huge disparity headroom-wise. 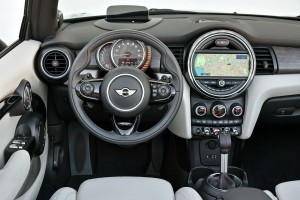 The Mini has a very decent 39 inches. The Fiat – ironically – has a duck-and-cover 35.6 inches. I say ironically because of the Fiat’s much taller (by some 4 inches) roofline. Where’d all the headroom go?

On the other hand, the Mini’s “trunk” is more like a purse: You’ve got just 7.6 cubic feet of capacity to work with vs. 9.5 cubic feet for the Fiat.

In real-world terms, the Mini is more viable if you need to occasionally carry people more than stuff. And if you’re not carrying people, you can always use the back seats for stuff. In the Fiat, you can carry more stuff – but carrying people is not crutchable.

You – your passengers – will just have to deal with the limited space.

Both cars have uniquely retro-snarky interiors, but the Mini’s is higher-rent as it it ought to be given its higher cost. In the S model you can get the same (or very similar) pleated leather seating as you’d find in a six-figure BMW 7. Which is not surprising given both the BMW 7 and the Mini are built by the same company. 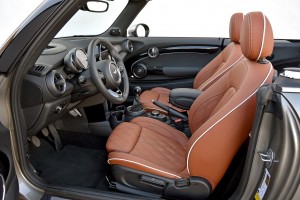 Echoing some of the design touches found in classic Minis (from the ’60s) are modern Mini touches such as the 8.8 inch central display cluster – which instead of the classic Mini’s central-mounted mechanical speedometer is an electric light orchestra of technology; it is also the visual interface for the car’s infotainment systems  – selected and engaged via a BMW-esque rotate and click mouse on the center console.

Also the ring around the base of the shift lever, to the left for Sport (Let’s Motor!) and to the right for Eco (Let’s Minimize!).

The LED light bar surrounding the central LCD cluster goes from red-orange to green, depending on your selection. 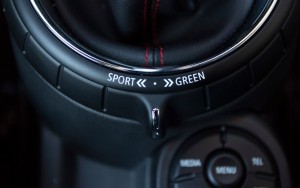 Cheery tones are part of the Mini Experience, too. The car makes happy little beeps and (occasionally) disgruntled sounding protest burbles when something’s amiss – like the parking brake lever still set when you’re in gear and trying to drive off.

But the Mini convertibles neatest feature is its three-mode soft-top.

In addition to the usual Up and Down, there is a “targa roof” mode that opens up the top section but leaves the rest in place. This can be opened and closed at any road speed, too. No need to slow or stop to drop the top.

The Fiat 500 “convertible” only has the targa roof option. The top does not drop. 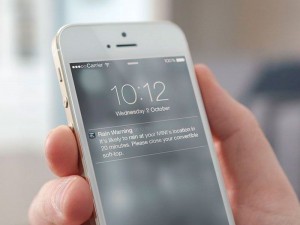 Speaking of tops dropped: The Mini is available with an app that pipes rain-coming warnings directly to your sail fawn. This is handy when you left the car parked outside with the top open while you’re maybe having dinner at a restaurant, unaware that the sky’s about to open up.

One of the many neat things about the Mini is the many options and packages that are available. There are so many options it’s possible to create a unique Mini. Or at least a Mini that’s different from most of the other Minis running around out there. 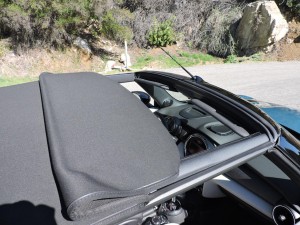 One of the not-so-neat things is the cost of some of these options and packages – like the $3,000 JCW appearance package for the base Mini ($5,000 if you prefer “fully loaded” – and yes, that’s the name of the package). You do get a lot of stuff (the “fully loaded” package includes a kicking 410 watt, 12 speaker Harman Kardon audio rig, dynamic/adjustable suspension, upgraded 8.8 inch LCD screen with GPS, heated seats, special wheel and tire package with 55-series run-flats and multiple trim upgrades) but – holy mackerel – it’ll cost you a lot.

That is a big number for such a small car. 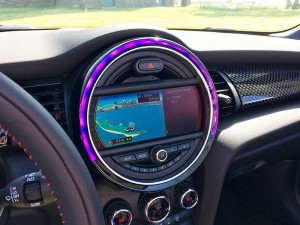 Counterpoint-wise, a top-of-the-line Fiat 500 Abarth with – literally – everything (the $975 Comfort/Convenience package, the $700 Beats upgrade audio rig, the $320 Mopar Scorpion package and the $135 All Weather package) comes in well under $30k.

That $10k-plus difference is not small.

Each of these two has its stronger and weaker points. Both will make you smile – but one charges more for the privilege.

As always, you pays your money and you takes your pick.