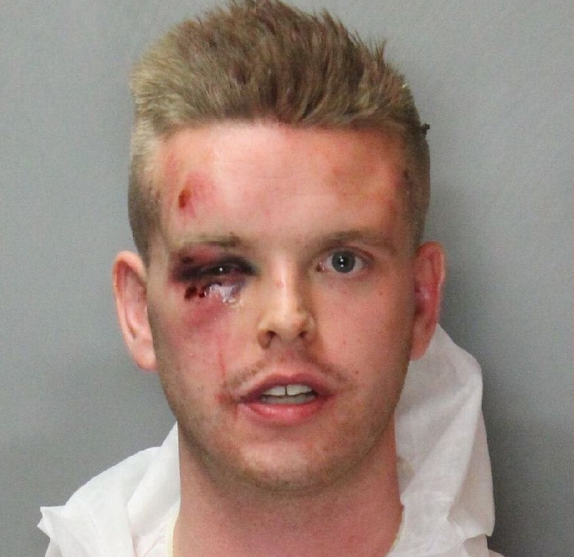 We’re told people – meaning, ordinary citizens – can’t be trusted to possess guns. But when “heroes” handle guns recklessly or even criminally, there’s hardly a peep along the same lines.

Earlier this month, Contra Costa County, CA Sheriff’s Deputy Kyle E. Rowland decided to crash a house party in Sacramento. Although nobody at the party actually knew him, he claimed to be a neighbor and had beer. So, they let him into the party.

Via KCRA.com (the local NBC affiliate):

“He started creeping around the house, being all weird, talking to girls in very strange ways, being a little bit aggressive,” (resident Joseph) Lozoya said. So, Rowland was kicked out of the house twice.

“As he was leaving, he was saying, ‘I’m going to come back. I know where you live, I’ve been watching you,’” Lozoya said.

Rowland soon returned with a gun, and people at the party tried to taken (sic) it from him.

“That’s when I told my girlfriend to stay inside because he was just firing everywhere while he was getting tackled,” Alberto said. “I remember when he was already on the ground, he was still pulling the trigger.”

Eventually, Rowland was restrained until police arrived and arrested him, McPhail said.

Two firearms were also recovered from the scene, police said.

Contra Costa Sheriff’s Office spokesperson Jimmy Lee said in a statement Sunday that Rowland joined the sheriff’s office in October and was on probationary status.

“He was on probationary status and his employment has been terminated,” Lee said.