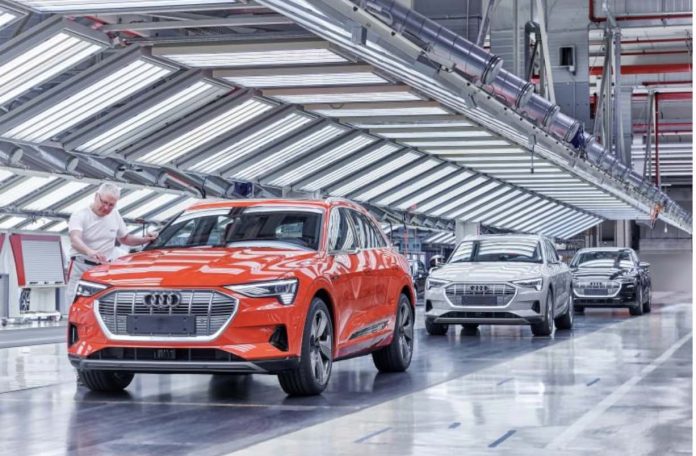 Audi’s first electric car – the eTron – has been recalled over a defect with the battery that could lead to a roadside barbecue – with you inside.

As reported by Bloomberg, the automaker is concerned moisture could enter the battery compartment through a faulty seal, potentially leading to a short circuit or even a serious fire. Audi calls the latter scenario an “extreme case.” Lithium-ion battery cells are highly volatile if breached by air or moisture; the resulting fire, as seen in several recent Tesla Model S incidents, can erupt quickly and prove very difficult to extinguish.

Interestingly, this isn’t a “defect” in the usually understood sense. It’s just how electric car batteries are.

While no fires or injuries have been reported as a result of the flaw, Audi claims five instances of battery fault lights turning on because of moisture seepage. The company began informing owners last week, with a fix available starting in August, Audi claims.

“We are applying an abundance of caution as no such incidents have been reported globally,” the company said in a statement, referring to fires.

Not all of the Brussels-built E-Trons assembled thus far contain the flaw, apparently. The automaker claims the model remains available, and it doesn’t appear that there is a stop sale order in place for the vehicle.

As they await a fix, affected owners are being told they’re eligible for an $800 cash card to cover gas purchases, rentals, and other costs stemming from the recall. Free roadside towing has been extended to these owners, too.

As for Tesla, the automaker continues investigating the cause of a rash of car fires spanning the globe. Following the most recent fire in Antwerp, Belgium, the company issued an over-the-air update to the charge and thermal management settings on Model S and Model X vehicles.

Hot zig. We’re all fired up!