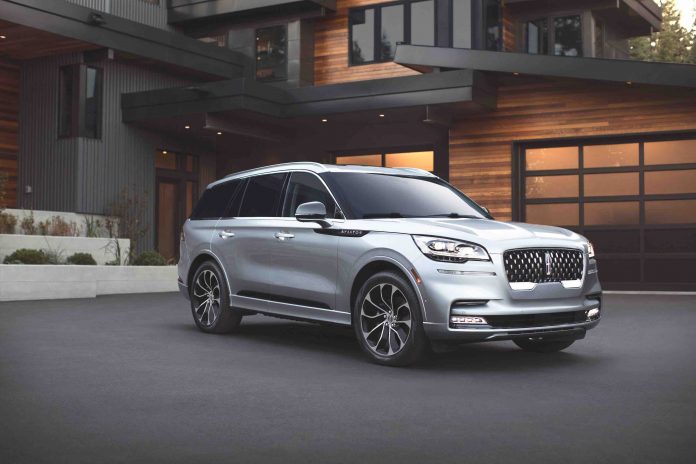 Lincoln won’t be making the Continental sedan after the end of this model year – or any cars  at all, after this year.

Henceforth, all Lincolns will be SUVs – like the Aviator that’s the subject of this review.

People just seem to like the layout better, probably because that’s what’s popular – which creates a feedback loop on the showroom floor as much as it does on the racks of clothing stores, where you’re likely to find more of what sells than the stuff that doesn’t.

And so they make even more of the stuff that sells.

But there are other reasons in the Aviator’s favor than just its shape. 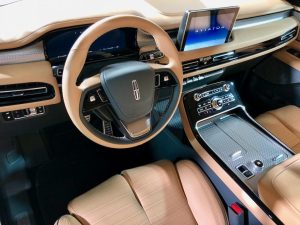 The Aviator is Lincoln’s almost-Navigator, the brand’s largest and most expensive SUV.

It’s mid-sized rather than full-sized but still has three rows of seats and room for seven people.

It is also an SUV – not a crossover.

That means it isn’t built on a light-duty, car-type chassis. Like its bigger brother, the Navigator, the Aviator is built on a rear-drive layout and because of that it can tow up to 6,700 lbs. Most front-drive-based crossovers max out around 5,000 lbs. of towing capacity, limiting their usefulness for pulling campers and boats.

The big difference between the Aviator and the Navigator – other than size and price – is that the Aviator does not offer four-wheel-drive with a two-speed transfer case and Low range gearing. Instead,it offers a full-time all-wheel-drive system with driver-selectable modes that is in many ways superior for on-road use (more on this below).

It also offers more power than you can get in the Navigator.

Prices start at $51,000 for the rear-drive base trim, which can be upgraded to AWD for $53,600. This one comes standard with a 400 horsepower turbocharged 3.0 liter V6 and a ten-speed automatic transmission. 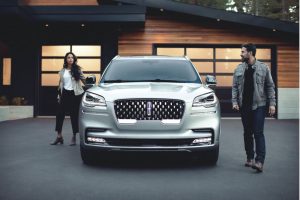 A top-of-the-line Black Label Grand Touring trim – which includes a suite of white-glove Lincoln personal concierge services, such as pick-up of the vehicle when it needs service and drop off of a loaner car  to use while it is being serviced – as well as a 494 horsepower/630 ft.-lbs. of torque mild-hybrid drivetrain (with AWD also included) stickers for $88,335.

The Aviator was introduced in 2020 as a brand-new model for Lincoln so the changes for 2021 are all on the window sticker. The price of the base trim remains the same – but you’ll see some inflation in the MSRPs of the other trims, including the top-of-the-line Black Label Grand Touring.

It costs $535 more this year than it did last year.

An interesting mix of real SUV capability (especially towing capacity) with a more car-like demeanor than its lunkier bigger-brother, the Navigator.

Superhero power is standard – and more is available. 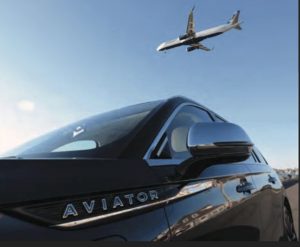 Powerful engine turns itself off – and on – over and over.

Most powerful hybrid version doesn’t pull as much (5,600 lbs.) as standard – and less powerful – version.

The Aviator comes standard with a 400 horsepower turbocharged V6 – similar to the Navigator’s but 3.0 liters instead of 3.5 liters.

The Navigator’s larger turbo V6 makes 450 horsepower. But no more horsepower is available. 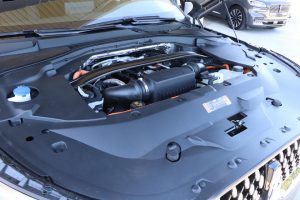 The Aviator can also be equipped with an optional turbo-hybrid combo that ups the horsepower to 494 – vs. the Navigator’s 450 – and swells the torque to an astounding 630 ft.-lbs.

Even more astounding is the range you get with this combo – close to 600 miles, with 21 of them entirely on the batteries. The Aviator’s legs are longer than a hybrid Prius’ legs – and the Prius doesn’t get to 60 in just over 5 seconds, in addition to not being able to carry seven people or pull anything.

This in spite of the hybrid’s mountain of torque – more than any V8 available in a current full-sized truck comes close to making. 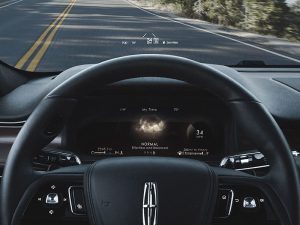 So what’s the problem?

It probably has to do with some element of the hybrid drivetrain that might not hold up as well – or as long –  if tasked with pulling almost 7,000 pounds, in addition to the 5,687 pounds of hybrid Aviator.

Which is 923 pounds more Aviator than the curb weight of the non-hybrid model,which weighs 4,764 pounds.

In other words, the hybrid carries a bit more – and pulls a bit less.

But it also hauls – and that makes up for what it doesn’t pull.

All versions come standard with the automated stop/start system (ASS) that is becoming common in all new vehicles as a fuel-saving measure. The good news is it can be disabled if you prefer the engine to only shut off when you push the button to turn it off. 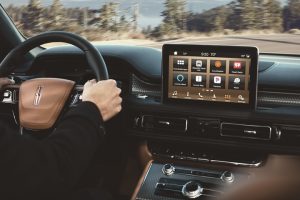 The Aviator drives a lot like the Continental – the big sedan Lincoln will stop selling after the end of this model year.

It drives very unlike the Navigator, which is a split-the-difference that makes big sense and probably accounts for the Great Success (Borat voice) this SUV has had that the Continental has not.

Once behind the wheel – and it is easier to get behind the wheel, because you get in the lower-riding Aviator as you would a car, without needing a deployable step-ladder to climb aboard – it feels like the big, ultra-plush sedan it almost is.

This includes its ultra-light steering, which makes directing the course of this mobile sofa as easy as pushing the recline button on your favorite Barcalounger. These seats massage, too. 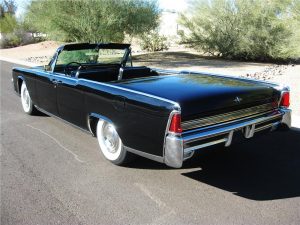 Lincoln understands that what people seem to crave these days is not the crossover or the SUV so much as the land yachts of the halcyon days of American car greatness – the ultra-plush sleds of ‘60s and ‘70s – without the getting-lost-in-the-crossover/SUVs-everywhere reality of our days.

The Continental arguably failed at least in part because while it was a sled and very plush it didn’t stand out and that was because it was hard to see it – with crossovers and SUVs looming taller all around it. The Aviator stands almost a foot taller than the Connie – 69.8 inches at the roofline vs. 58.5 for the last of the Lincoln sedans – but not as tall as the Navigator, which ascends to a height of 76.3 inches.

The split-the-difference is less SUV-ish top-heaviness in the curves (and greater stability on the straights at high speeds due to less susceptibility to wind buffeting) without feeling lorded-over by everything around you. 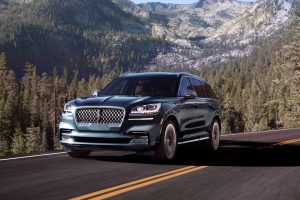 And then there is the lordly acceleration of this higher-riding (but not too high) Continental in more than crossover-but-not-quite-full-on-SUV configuration.

The 400 hp version is quicker and more responsive (due to the near-instantaneous turbo boost) than any Hot Rod Lincoln ever was and the hybrid version’s 630 ft.-lbs. of torque is a monster swell of Perfect Storm proportions that has to be felt to be believed.

Be careful about touching the pedal.

The thing will test the tensile strength of the bolts holding the seats to the floorboards. And being able to not stop for almost 600 miles is something wonderfully incongruous given what this is – which isn’t a tiny little Prius. 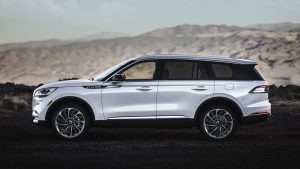 Or, for that matter, a tethered-to-its-plug electric car.

It can be plugged in, of course. But the difference that makes all the difference is that you don’t have to – and that means you never have to wait. Or at least, your wait will never be longer than the five minutes or so it takes to gas it up. You can charge it up later – when you don’t need to get anywhere for awhile. The pure electrics being ram-rodded onto the market brook no such convenience or flexibility. You will stop – and wait.

No wonder they have to be ram-rodded onto the market. 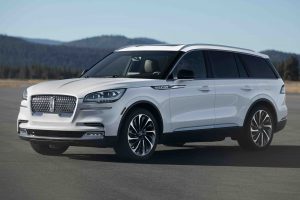 Lincolns have always been the American luxury car – or SUV – for the buyer who wants the luxury but not the flash. Cadillacs being the cars – and SUVs – for people who want to flash.

The tradition continues – and echoes.

Inside, especially – where you’ll find plush retro, including individual push-buttons for each of the transmission’s ranges juxtaposed with a modern LCD touchscreen. The vibe is Sinatra-JFK rather than Soprano.

End to end,the Aviator is 199.3 inches long – which is slightly smaller overall than the on-its-way-out Continental sedan, which is 201.4 inches end to end.

But the Aviator seats seven vs. just five – plus it has 18.3 cubic feet of cargo space behind its third row (vs. 16.7 in the Connie’s trunk)  which space can be quadrupled to 77.7 inches by lowering the second and third row seats. 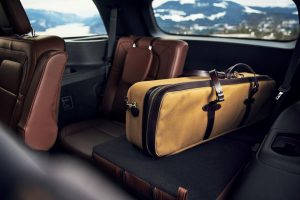 That is living large space.

As it turns out, almost as much space as the much larger (and much taller) Navigator, which has 19.3 cubic feet of cargo space behind its third row. It also has something else, which the Aviator has less of:

A big ol’ hump down the spine of its floorboard.

This is probably a function of the Navigator’s body-on-frame layout. The Aviator’s unibody (welded together body and frame) is more space-efficient, which is part of the reason why you will find more vehicles built on that layout. The Navigator does make up for the spine dividing its interior space by having more headroom – but this is more an academic point unless you are in the NBA or least taller than 6 ft. 5 or so. NBA (and NFL) players love Navigators and similar large SUVs because they are just about the only vehicles that can accommodate them. 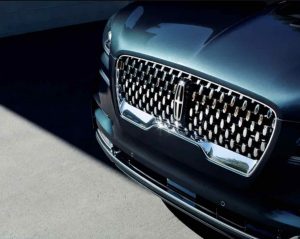 There is another Aviator advantage as well – vs. the Navigator: The lower ride height makes using the cargo space less awkward. You’re less likely to pull something by not-having to raise it up to the level of the Aviator’s not-as-high cargo floor.

The main advantage of the lunkier Navigator is that it is truly a Clydesdale as far as pulling power – 8,700 lbs. That plus the low-range gearing and two-speed transfer case, which makes it capable of dealing with serious off-road work while the Aviator is decidedly more of an on-roader.

Which brings up one other thing . . . 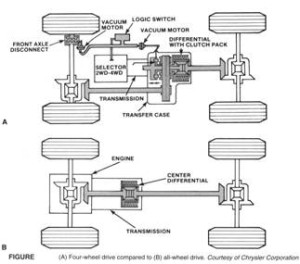 And the reason for that is because 4WD with Low range- the type of system developed for trucks and used mostly in truck-based SUVs like the Navigator – is usually meant to be engaged when off-road or when there is heavy snow on the road. Not when driving on dry, paved roads.

AWD, on the other hand, is meant to be on all the time and serves as both a traction aid when the road is slippery and straight-ahead and a handling aid when the road gets curvy and you’re moving fast. It is thus the preferable system if most of your driving is on rather than off road, with just enough grip to deal with almost anything short of an epic blizzard on the road.

Consider it an alternative to the Navigator that’s everything the Connie should have been.

And now kinda-sorta is.

Tesla – and GM – Finally Admit It 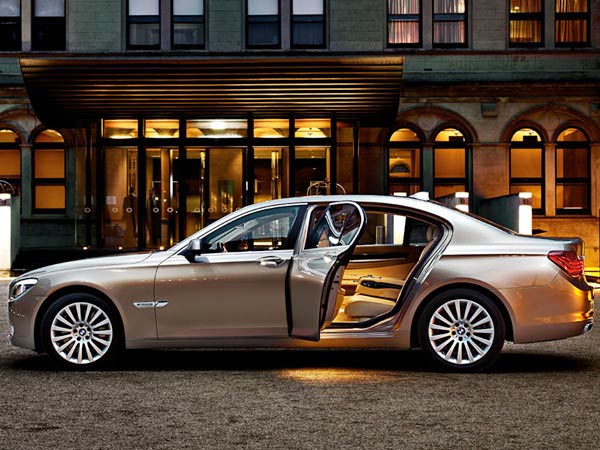