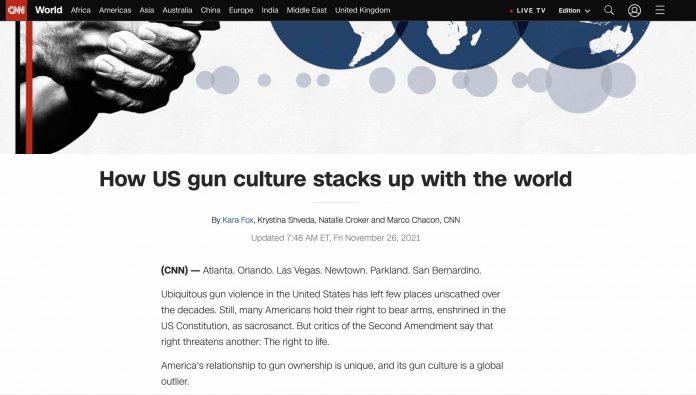 CNN ought to ask itself why fewer and fewer read (or watch).

A good place to start would be the chock full o’ non sequiturs it published the other day, titled as per the headline of this dissection thereof.

“Ubiquitous gun violence in the United States . . .” it opens. Wait a minute. Let me consult my dictionary as ubiquitous is a big word and I want to be sure I have the meaning right. Ah, yes. Ubiquitous. Synonyms include omnipresent and everywhere.

I look out my window and do not see “ubiquitous” gun violence or even any, at all. In fact, there is essentially no – as in zero – gun violence in my rural SW Virginia county (Floyd, Va.) notwithstanding that guns are, indeed, very ubiquitous. If I turn my head the other direction, away from the window, I will see some of them. The ones I own. They are much like the guns my neighbors own. That practically everyone in my rural county owns yet almost no one ever commits violence with.

This being a fact – and not by any means an isolated one (there are similar gun-concentrations in most rural areas and a similar dearth of what the CNN people style “gun violence” in those areas) and for that reason, the CNN piece is simply, factually, in error. 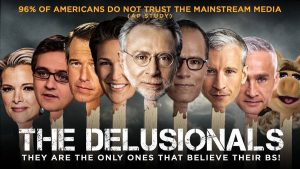 The first three words cast both an objective falsehood and a slur, which is something one will find  . . . ubiquitously over at CNN (another recent example of the same being the snide – and false – reporting that podcaster Joe Rogan self-treated his case of the ‘Rona with “horse dewormer”).

Why would anyone continue reading – or listening – to anything people of such ubiquitously bad faith (or is it merely intellectual sloppiness?) have to say about anything? Well, perhaps for the same reason pathologists paw through the maggot-crawling remains of dead people. One sometimes must wade deep to get at the truth of a thing.

The piece goes on:

“Ubiquitous gun violence in the United States has left few places unscathed over the decades . . .”

Well, except for most places.

Is it even necessary to point out the well-known fact that “gun violence” is “ubiquitous” almost exclusively in “places” where there is political violence – in the form of legal prohibitions upon the possession and most all the carrying of guns outside of one’s home? Examples of such “places” abound but perhaps the most conspicuously violent is Chicago. There, violence with guns abounds – chiefly because the violent have them, contra the law –  while those not violent are denied them, by the law.

This is well-known, a cliche.

The direct correlation isn’t between guns and violence. It is between violent places and guns. Almost all of the latter are urban wastelands where it is illegal to own guns and for that reason the people who are violent do own them. And use them on the non-violent as well as each other.

CNN – and other actors of bad faith – ubiquitously make the false and slanderous word-association between simple gun ownership and violence; it is the modus operandi of the people who write such pieces and it transcends the “gun violence” hobbyhorse they love to ride.

Of a piece examples include the false association of not wearing “masks” (or getting Jabs) with the spread of sickness and death. It’s false and opprobrius – which is why those so attacked resent it and stop reading and listening to the lies and opprobrium directed their way.

“Still, many Americans hold their right to bear arms, enshrined in the U.S. Constitution, as sacrosanct.”

Indeed, they do. As you (CNN) hold “sacrosanct” your right – also enshrined in the U.S. Constitution – to hold forth inaccurately and slanderously. Even as you agitate for the suppression of the free speech rights of any who disagree with you. Even though that right you “hold sacrosanct” is debatable, in your case – since slander and lies are not necessarily subsumed under the right to freedom of the press.

Ready for more? You may perhaps wish to down a tumbler or two of some top-shelf stuff before proceeding .  .  . 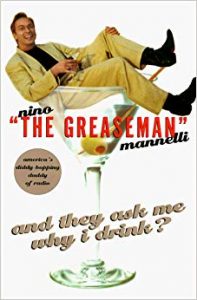 “But critics of the Second Amendment say that right threatens another: The right to life.”

In other words, you (saith CNN, obliquely but also clearly) do not have the right to defend your life, which in many cases can only be done with a gun (see, for example, the recent Kyle Rittenhouse affair, which of course CNN regards as willful murder rather an act of self-defense, as the jury ruled because how else could any jury have ruled?) because others have used guns to take lives.

I – like many people who’ve never committed an act of violence – have had guns all my life. In part to have the means of defending my life, should that ever become necessary. How that threatens the “right to life” of anyone not bent on taking mine escapes me.

Perhaps it takes reading more CNN to understand it.

I think I’d rather not.

What Have You Got to Lose?