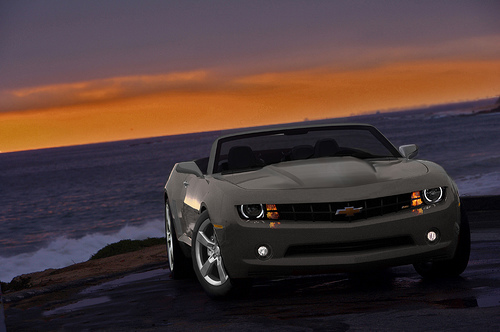 I’m not seeing many new Camaros – so I thought I’d check into the numbers.

It does not look good.

For some perspective, that’s about what Camaro (and its now-defunct sister car, the Pontiac Firebird) sales were back in 2002 – the year the cars were cancelled. Combined production for that year was 72,788 – which was considered terrible by GM and industry analysts. Definitely not sufficient to justify keeping the car in production – which is why both cars were dropped (the Firebird, permanently).

When Camaro was hot, it was selling an easy 100,000 units annually. When it was really hot, back in the late 1970s, as many as a quarter million were sold in a single year. Those were the Great Days, when you could hardly go outside and not see a Camaro – or a Firebird.

If you were around back then you no doubt remember how Everywhere they were. IROC-Zs and GTAs. Hundreds of thousands of them were made. Along with Ford’s Mustang Five-Point-0, they were among the hottest – and best-selling – cars of the period.

But that was a time when the sporty car market was much different – much less competitive than it is now. Among other things, the Camaros and Firebird of the time faced little in the way of serious challenge for enthusiast buyers’ dollars from front wheel drive or all-wheel-drive imports, of which there were far fewer, for openers.

Today, FWD and AWD performance cars are many – and very popular. They come in more practical sedan/wagon bodystyles (Subaru WRX, Mitsubishi EVO), making them viable as everyday cars – duty a V-8 muscle coupe with an unusable backseat has trouble dealing with.

For seconds, the market for rear-drive V-8 muscle coupes was still very strong back then because the young generation of the time grew up with V-8s and RWD and that’s what they wanted and expected in a performance car. FWD cars were considered economy cars; you couldn’t do a burnout with AWD – and four cylinders and six-bangers, turbo’d or not, just didn’t have the mojo of a big ol’ V-8.

But the young crowd today grew up with FWD  compacts and that’s their default preference. They didn’t bond with hulking V-8s and 4,000 pounder RWD performance cars because those cars were just not around when they were growing up.

Plus, gas was cheap.

Even taking inflation into account, gas costs a lot more today. About 60 cents more per gallon. It’s also got less energy content, being about 10 percent ethanol (thanks, corn lobby) so you don’t go as far on a gallon, which means you fill up more often.

Porsche drivers don’t care about this, of course – because they’re generally older and by definition, richer.

But Camaro is by definition a young man’s car. And young men (and women) are usually not rich, or even affluent. They’re trying to get a leg-up, save for a house maybe. Many of them might want a car like Camaro – and would buy one when gas is cheap and good jobs plentiful.

But that’s not the situation today.

Gas is over $3.00 a gallon and could soar back to $4 (or more) at almost any time. Everyone knows this – fears this. Unemployment is still hovering close to 10 percent, “officially” (despite the government’s happy talk and it’s really close to 18 percent if you go by honest accounting). A record number of 20 and 30-somethings have moved back home – with Mom and Dad – because the job market sucks and they can’t afford an apartment.

Sales of the current Camaro – the reborn model – peaked just after its introduction and have been declining gradually ever since. In August of 2010, sales dropped 27 percent. In September, they were down 21 percent. By October, they dropped by 38 percent.

This should be setting off alarms.

My guess is the first year (2010) sales were mostly to aging Generation Xers and Boomers – people in their 40s (and older) who are reliving their  high school and college-era muscle car romances. But this is not sufficient to keep Camaro afloat because there are only so many 40-50 somethings who have

the interest – and the disposable income – to indulge such a purchase. Once this group has bought its fill, who’s gonna take up the slack?  GM needs to sell this car to today’s 20 and 30-somethings; that’s the sweet spot. But the kids are buying other things – or they’re not buying anything at all.

No one outside of GM can say what the tipping point is – when the cost of building the car, including compliance costs associated with CAFE, exceeds the net profit to the company from selling the car.

But it can’t be far off – and we may have already crossed it.