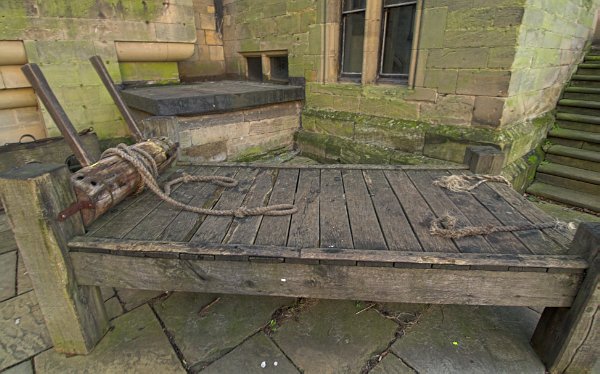 Is traffic enforcement getting out of control?

* Many states have “asset forfeiture” laws that permit the seizure of your vehicle if, for example, a little marijuana (or other arbitrarily “controlled”) substance is found during a traffic stop, including those probable-cause-free “checkpoints” that cops now use to make such seizures even easier.

Whatever you may think about pot smokers – or other-than-allowed-drug-use in general – it seems a bit much to expropriate personal property that in many cases is worth tens of thousands of dollars because a guy had some grass (or whatever) on him. Note: Not smoking the stuff; just having it on him. As a mental experiment, imagine a cop just taking your car (and taking you to jail) because he popped the trunk and found you had a case of wine back there. What’s the difference? One’s “controlled” and the other’s not. (Personal note: I don’t smoke pot or consume legal drugs – alcohol and tobacco. Well, I do drink a lot of coffee. Still, this isn’t advocacy of “substance abuse.” It’s advocacy of sanity.)

Violent criminals – who often have no assets to seize – probably suffer far less in terms of actual punishment. What, after all, is a few months in the taxpayer-subsidized clink with free food, cable TV and heaf cayuh, too in terms of punishment to a loser lowlife who has no job to lose, no assets to forfeit and plenty of time on his hands anyhow? But just taking someone’s $35,000 vehicle? That’s a whole ‘nother thing.

* Maryland State Police have deployed military-style infrared night vision goggles to surveil motorists at night for the purpose of determining whether they were wearing seatbelts. IFR equipment costs thousands of dollars, but of course, the state can take in thousands of dollars in “revenue” via the fines they collect, so the math works out. But is targeting civilians in this way – with military equipment – to find out whether they’re “buckled up for safety” a proper use of police authority in a (cough) free country?

* Virginia defines “reckless driving” as anything more than 20 MPH faster than the posted speed limit; thus, on a major Interstate highway spur such as I-581 near my hometown of Roanoke, Va. – where the speed limit is still set at a Jimmy Carter-esque 55 MPH – you can be tagged for “reckless driving” for doing 76 MPH, which is slightly faster than the average flow of traffic. In Virginia, a “reckless driving” cite means a mandatory court appearance (no mailing in the fine) and you’d better hire a lawyer, too – because conviction means a huge fine, the possibility of your driver’s license being suspended and the certainty of a six “demerit” points being assigned to your DMV rap sheet. Your insurance will likely go up by 30-50 percent, if it’s not canceled altogether. Better have a top-shelf shyster on your speed dial.

* In Georgia, North Carolina and a dozen other states people convicted of nothing more serious than “speeding” can be sent to jail for up to a a year – at the discretion of the local judge. Better hope it’s not Boss Hogg (see http://www.007radardetectors.com/speeding_fines.htm for some state-by-state examples).

* The legal threshold for “drunk driving” is now at .08 BAC in every state – so it’s already well below the .10 BC threshold that correlates with actual accidents (vs. an arbitrary, highly politicized definition of “impairment”) but efforts to lower it even more, to .06 or even .04 (a level of “intoxication” that can be reached after a single drink) are in the works. No one defends drunk driving – but is one really “drunk” (or even significantly impaired) after a single drink? Or even two? Based on what evidence? It seems we’re on the path to “zero tolerance” – a position openly championed by that cash machine and political juggernaut Mothers Against Drunk Driving. It sounds righteous but it’s arguably ridiculous to tag people with trace amounts of alcohol in their system as ” drunks” – especially when there’s no evidence their driving has been impaired.

* “Primary enforcement” of seatbelt laws gives cops legal authority to pull drivers over simply because they’re not wearing their seat belt. Regardless of the wisdom of buckling up, should police have the authority to pull drivers over for a personal choice that has nothing to do with whether the person is a danger to others? It may be safer for the driver to buckle-up, but an unbuckled motorist poses no threat to the safety of other drivers – just as an overweight cop who lives on fast food isn’t endangering anyone but himself. But the cop is in no danger of a ticket for “risky eating.” Isn’t this an unfair double-standard? If the driver deserves a ticket, why not the cop?

The late author Samuel Francis described this state of affairs as “anarcho-tyranny” – ordinary citizens getting harassed more and more aggressively by the law and its enforcers over small-time “technical fouls” (such as speeding or failing to buckle up) while violent thugs and big-time lawbreakers suffer less and less in terms of real-world consequences for their actions. The “speeder” gets several thousand dollars in fines and 30 days in the clink; a guy who isn’t even doing that loses his $35,000 vehicle because some cop found a small bag of pot in the glovebox during a seatbelt safety check. Meanwhile violent thugs receive perhaps a few weeks/months of free room and board at taxpayers’ expense.

For the average person, the loss of their driver’s license, vehicle, massive fines – or a week in jail – can be life-altering. For a violent thug, fines are irrelevant, his “record” is something to boast about – and jail time means free room and board. The thug hasn’t got a job to lose – and owns nothing of value that can be seized by the government. That’s probably why law enforcement isn’t much interested; there’s no money there.

Our Constitution and Bill of Rights were supposed to ensure equal treatment – but that’s been thrown out the window, too – along with the First, Second and Fourth Amendments (to name the major casualties).

Maybe keeping wife beaters, child molesters and all the various cretins and thugs out there at bay (or secured inside the walls of a prison someplace) ought to be a higher priority than worrying about seat-belt violators, “speeders” and the couple that enjoyed a glass of wine with their dinner before heading home.

But that would be reasonable – and we live in an increasingly unreasonable era.