The average American will likely have trouble with the following:

This map tells the whole story. Each star represents a U.S. military base. In the middle, in blue, is Iran. Iran has no military bases outside its borders. Just north of Iran is Georgia that has essentially become a U.S./NATO base. Turkey belongs to NATO. Iran has been checkmated. North of Georgia is Russia. Can there be any wonder why Russia is so alarmed about an attack on Iran? 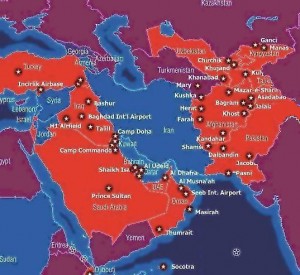 Imagine if we saw a map of the U.S. with Russian or Chinese military bases throughout Canada and Mexico along with their warships just off the Atlantic and Pacific coasts. The American people would be going ballistic. But when we do it to others, no one even blinks an eye.
Following the recent spy drone fiasco over Iran the U.S. has been working hard to justify these flights. In an Associated Press story yesterday it was reported that the covert operations in play are “much bigger than people appreciate,” said Stephen Hadley, former national security adviser under George W. Bush. “But the U.S. needs to be using everything it can.” Hadley said that if Iran continues to defy U.N. resolutions and doesn’t curb its nuclear ambitions, the quiet conflict “will only get nastier.”
Hadley’s statement “But the U.S. needs to be using everything it can” has the sound of imminent danger, of desperation. But after looking at this map where does the danger really lie? Iran is actually no danger to anyone. The real danger is that the U.S./NATO/Israel have their itchy fingers on the war trigger and could attack at any time.
One last thing is Mr. Hadley himself. Unknown to the public at large, Stephen Hadley carried on a quiet career in the shadow of Brent Scowcroft and Condoleeza Rice. A business lawyer convicted of fraud, he became the counselor for the largest arms manufacturer in the world, Lockheed Martin. He advised the candidate George W. Bush, helped write the U.S.’s new aggressive nuclear doctrine, helped create the Department of Homeland Security, supervised new entries into NATO, and helped sell the invasion of Iraq. Ever faithful, he protected Bush the father from the Irangate scandal and Bush the son from the lies of the Iraq war. He found himself rewarded by becoming George W. Bush’s National Security Advisor.
At the beginning of the 1980s, Mr. Steven Hadley ran an insurance fraud of close to $1.1 million. He was discovered, found guilty by a court in Iowa, and forced to reimburse the money. To erase any trace to his crime, he changed his name to Stephen John Hadley.
When Ronald Reagan took the White House, Mr. Hadley stayed in the private sector. However, in 1986, the Irangate scandal broke. President Reagan appointed a commission of three wise men to “investigate”. It was composed of the Texan Senator John Tower, Edmund Muskie, and Brent Scowcroft who called Stephen J. Hadley to his side. In spite of the evidence, the commission concluded that President Reagan and Vice-President Bush were innocent. They found that the financing of the Contras in Nicaragua through the trafficking of drugs and illegal weapons sales to Iran was a secret initiative of over-zealous members of the National Security Council, put into place without the knowledge of their superiors. No big heads rolled.
As lawyer for Lockheed Martin, Hadley worked with the directors of the firm, including Lyne Cheney (wife of Dick). He became close with Bruce P. Jackson, the vice-president of the firm in charge of creating new markets. Together they initiated the U.S. Committee to Expand NATO into which they brought Richard Perle and Paul Wolfowitz. The Committee engineered the entry of the Czech Republic, Hungary and Poland into NATO in 1999. Then that of Bulgaria, Estonia, Latonia, Lithuania, Romania, Slovakia and Slovenia. Each time, the leaders of the new member states were solicited to bring their armies up to the scale (interoperability) with NATO, in other words, to purchase new military hardware from Lockheed Martin.
Global Network board member Karl Grossman reported 10 years ago that Hadley was also instrumental in helping Donald Rumsfeld write his report calling for U.S. control and domination of space. “Space is going to be important. It has a great future in the military,” Hadley told the Air Force Association Convention in a 2001 speech. Introduced as an “adviser to Governor George W. Bush,” Hadley said that Bush’s “concern has been that the [Clinton] Administration…doesn’t reflect a real commitment to missile defense.” In 1998 Rumsfeld’s commission reversed a 1995 finding by the nation’s intelligence agencies that the country was not in imminent danger from ballistic missiles acquired by new powers, declaring that “rogue states” did pose such a threat. The answer? Missile defense.
It is obvious that Hadley has been at this game a very long time. His connections to Lockheed Martin, and even the Bush administration, have been long forgotten. So when he is quoted in a current news story few see the irony of him defending CIA spy drone flights over Iran. It is good that we take a moment though and remember the real “his-story” otherwise we are likely to repeat the terror and carnage of past U.S. snake oil invasions of Afghanistan and Iraq.