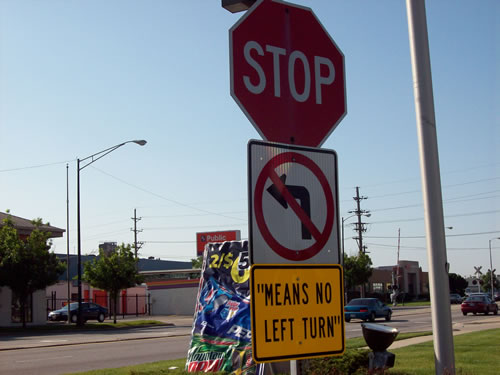 Think about something you’re better-than-average at. Better yet, something you’re good at. Now imagine being required by law – backed by the threat of violence for failure to comply – to dumb yourself down to the level of the average. Performance at a higher level puts you in violation – and subject to punishment.

Of course. But that doesn’t prevent it from being the basis of traffic law (and other laws besides).

Consider “jaywalking.” The law says this occurs when a pedestrian crosses a street before an “ok to proceed” light tells him he may. The legal premise is that the average person is too low-performance to gauge when he may safely cross the street. And he may well be. But – and here’s where it gets interesting – rather than using the situation as a teaching moment, our system immediately, reflexively, puts up a crutch (the “walk/don’t walk” light) and – much worse – turns a punitive eye toward the able and competent pedestrians who don’t need the light. Incentives, on the one hand, are created that encourage passivity (mindless compliance) while on the other, another salvo is fired at the exercise of initiative for the sole purpose of defeating it and encouraging an ever-more-passive populace.

And I choose the word think very deliberately.

Why, if the way is clear, should one not cross the street – irrespective of signs and lights? Because it is The Law, will be the reply of the authoritarian equalizer type I call Clovers.

And The Law does not consider it relevant whether, in fact, the street was devoid of cars and it was safe therefore to cross. Not only reason but a defense based on the assertion of no harm done is no defense at all. Submit and Obey. That is what’s required. No matter how arbitrary, no matter how unreasonable. Just – do as you are told.

Laws against speeding are now similarly premised. There used to be a legally viable defense which amounted to convincing the judge that even though you may have been driving faster than the posted speed limit, the speed you were driving was not unsafe for conditions. The road was a major highway; the day was clear, traffic was light. You get the cop to concede your car was under control, that you were not weaving, drifting or otherwise doing anything obviously dangerous to others.

Forget about trying this line of reasoning today.

Because today, most speed limit laws are what lawyers call per se speed limit laws. It means you’re guilty of “speeding” regardless of whether it was safe under the specific conditions. In other words, your actual driving is irrelevant. All that matters, legally speaking, is that you have been caught exceeding whatever speed the bureaucrats have posted. Guilty. $300 fine plus court costs. We’ll be sure to let your insurance company know, too.

It’s exasperating because it’s both unjust and corrosive. Unjust, because arguably, no one should be subject to punishment absent provable harm having been committed. A truly guilty person (provided he’s not a sociopath) will feel guilt if he has done something to cause harm to another person. And he will accept his punishment with equanimity.

After all, he deserves it.

This is – or was – a fundamental tenet of Western (and American) law. It found expression in the old saying – no harm, no foul. That has been upended. Now people who do no harm are routinely judged “guilty” who have committed no foul – no harm – at all. And they resent it – rightly. You are just driving along, in full control of your vehicle, in no way causing or threatening to cause harm to anyone. But you are traveling faster than an arbitrarily decreed number. A cop observes you, not driving dangerously, merely driving faster than legally allowed. He pulls you over with much sturm und drang (usually accompanied by a cant-choked lecture about The Law) culminating in the issuance of a piece of paper ordering you to pay a large sum of money for no reason at all – other than your having “exceeded the posted speed limit.”

It makes you angry. Think about this. Most of us – who are not sociopaths – would not be angry at being caught (and punished) for having done something to harm others. But to be threatened by an armed man (or woman) merely for flouting some arbitrary convention – some “law” – when you know in your heart (and mind) that you were no threat to anyone? That “the law” in question is a technicality at best and an absurdity at worst? That will make any reasonable person very angry indeed.

And righteous anger of that sort is no good for the health of the system. It undermines legitimate law – and legitimate enforcement. It creates enmity where none ought to exist. It is responsible for the transformation of what used to be peace officers into law enforcement officers. Note the distinction. It is important. Peace officers maintain the peace. This is something all but the sociopaths among us would probably agree is desirable. But what does it mean to be a “law enforcement” officer? It means, to be a guy (or gal) with a gun and a badge who enforces whatever law happens to be on the books. To be callously, robotically indifferent to reason.

It does not matter to an “LEO” whether you are peaceful and harming no one. Whether you are competent – and your judgment sound. Whether – as in our original example – there was no traffic around and it was perfectly safe to walk across the street, even though the “walk” light hadn’t turned white yet.

All that matters to the LEO is – you guessed it – The Law.

Your judgment, even if provably sound, makes no difference. Your demonstrated ability to handle something with skill and competence – especially, higher skill and competence than the officially decreed “safe” average (however defined) – will only cause you problems if exercised. Slow down. Stop thinking so much. Wait for the light.