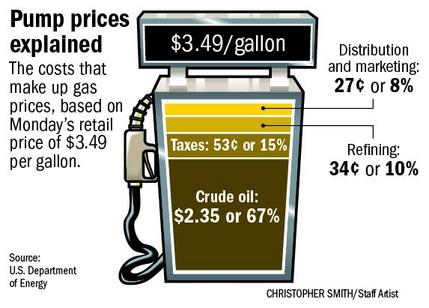 I was researching some Now vs. Then costs for a story I did recently on car prices when I stumbled onto something interesting – and revealing.

And so, worth sharing.

Find an inflation calculator; for example the federal government’s Bureau of Labor statistics CPI (Consumer Price Index) calculator (click here) . Select 1980 as your starting year. Enter $1.25 – about what a gallon of gas cost in 1980. Select 2011 – the most recent year the calculator allows. Click “calculate” and prepare for a surprise – one that will also provide a heretical insight into the nature of our economy as well as debunk a politically correct piece of conventional wisdom.

What does it mean?

First, it means that gas prices today, in real terms, are about the same as they were in 1980. You may be paying more in terms of the number of dollars, but you’re really paying the same in terms of the value of your money.

The only thing that’s really happened is you need more paper dollars to buy the same thing. The value is the same, but the money is worth less. The increase in gas prices is a mirage, a fiction. The commodity itself has not increased much in actual cost despite the passage of 32 years, despite the much-ballyhooed uptick in global demand and in spite of the alleged and endlessly imminent  bogeyman of “peak oil.”

And so we come to the awakening.

If the world was really running out of oil – or within sight of running out – the actual cost of the end product, gasoline, would be going up in real terms. Dramatically so. It’s an economic axiom that limited supply (scarcity) plus rising demand equals  ever-rising costs. So how come the real price of gas is about the same now as it was 32 years ago? The reason should be obvious:

We have plenty of oil.

Which means, we’ve been scammed.

Scammed by scare-mongering about “peak oil” – and robbed (and deceived) by inflation into accepting that it’s so. The price of oil goes up because the amount of money being printed has increased.

If this weren’t true, if we really are on the cusp of “peak oil,” not only would the real price of oil be much higher than it is (and rising precipitously, consistently) we’d be seeing cheap-oil-dependent industries adjusting their business models accordingly.

Consider just one example: The airline industry. It depends on affordable oil. Without it, air travel becomes a means of travel open only to the rich – who don’t fly coach or even commercial. Yet Airbus has invested a king’s ransom in fleets of A380s – double-decker wide-body jets designed to haul 525 people, more than a Boeing 747. These huge airplanes burn oceans of fuel – oceans of fuel that must be available at an economically reasonable cost for the forseeable future in order to fill the seats with passengers, most of whom are just ordinary folks who do fly coach and who cannot afford a first-class ticket, let alone a private jet.

Consider the people making the decisions at Airbus. Do you suppose they are imbeciles? That they don’t know about “peak oil” – or are just ignoring “the truth” about the imminence of The End of Oil? Or do you suppose it’s more plausible that they know there is plenty of oil now and for the foreseeable future – and are making business decisions accordingly?

Which makes more sense? Which comports more with the fact that oil prices have been stable for decades (a few short-term blips notwithstanding)?

Meanwhile, the false-flag “peak oil” story – and worries about imminent scarcity that seems to never actually arrive – are used to justify ever-more-onerous government regulations in the name of  conserving that which we’ve got plenty of.

Everything from fuel economy standards for cars that make them more expensive to laws pushing us to buy CFL lights that are (you guessed it) more expensive than “wasteful” (but much more affordable) incandescent bulbs.

And, of course, because there are people who are wise to the scam – who understand what inflation is and have figured out that market price signals indicate, if anything, more oil on tap than less (i.e., increasing worldwide demand has obviously been met with increased supply – and then some) there’s got to be a back-up excuse:

It’s the trump card tossed on the table when the real facts about oil and inflation – and not just the price of oil, but the fact that burning oil (as in cars) has become innocuous – begin to spread too far beyond the “fringe.”

Here’s the devastating fact with regard to the latter:  More than 97 percent of a 2012 model year car’s exhaust stream is water vapor and carbon dioxide – compounds that have no negative effect on air quality but which – according to the global warming crowd –  constitute “greenhouse gasses” that are dangerously warming the planet.

So, even though there is plenty of oil, and likely will be plenty of oil for years to come, we mustn’t use it (or must use less of it) in order to limit “greenhouse gasses.”

From one con (“peak oil”) to the next (“Anthropogenic global warming”).

Pull back the curtain on the first one and the second curtain’s ready to take its place.

And that, folks, is how the circus runs… .