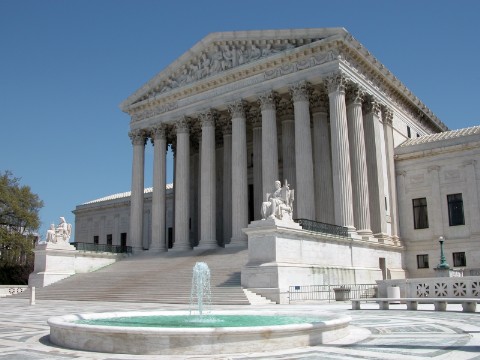 Sometimes, we get a lucky break. The same Supreme Court that routinely tramples the Constitution once in awhile stops mid-stomp, as if by dint of some atavistic recollection of the liberty it was charged to uphold – kind of like a wife beater who realizes he maybe hit the old gal once too much this time.

So, here’s what happened:

The Nine ruled on Monday  in U.S. v. Jones (PDF here) that planting a GPS tracking device on a person’s car without a valid court order constitutes an illegal search and therefore violates the Fourth Amendment. Which is wonderful – and right  – except it’s the exception that violates the rule.

This same Supreme Court has also ruled that’s it’s a-ok to stop motorists without a warrant or court order or even the thinnest pretext of probable cause and subject them to searches. Literally. Their actual bodies. By declining to even hear the case of Wisconsin v. Faust back in 2005, a case challenging the constitutionality of non-consensual blood draws at roadside sobriety checkpoints, the court affirmed this odious practice. On top of the equally odious prior precedent legalizing random stops on the basis of “compelling state interest” and something called “implied consent.”

The reason being the Talmudic process of judicial review, which deals not in broad principles applied to particulars but with pedantic legalisms defined by the purposeful absence of any reference to an over-riding principle.

Consider: In Monday’s case, U.S. v. Jones, the Court over-turned the conviction of Jones – a DC drug dealer – because someone forgot to have the original search warrant renewed and that became the basis for tossing out the subsequent evidence against Jones gathered by the GPS device attached to his car.

In other words, the broader Fourth Amendment issues were side-stepped. Thus, it’s still ok for our Fourth (and Fifth) Amendment rights to be snipped here, qualified there – even nullified outright – provided the necessary legalisms are upheld. Right and wrong are irrelevant and immaterial.

This is strategically essential, because it precludes even a discussion of the rightness or wrongness of the Leviathan state as such and replaces it with debates about how many angels can dance on the head of a pin. It is why a copy of the Constitution can comfortably fit in a standard envelope and be carried in your vest pocket while the volumes of case law fill libraries and require hand trucks to move around.

The law cannot deal in principle because it would render 90 percent of the legal profession unemployed by rendering the law a simple matter of Does it (or Does it not) conform to the simple, clearly stated principles articulated by the language of the Constitution? And of course, evaluating what the government does in terms of principle would immediately expose the con by awakening the average man to what is being done to him – and that simply cannot be allowed.

Instead, there’s jargon and cant and ratiocination.

There is Justice (sic) Sotomayor prattling on about the constitutional impropriety of non-physical searches (e.g., searches conducted by accessing electronically available data) while embracing all manner of physical searches, such as searches of your person and effects at the airport.And Justice (sic) Scalia characterizing as “unwise” the application of “18th century tort law” to 21st century technology. Whatever that is supposed to mean.

To the hair-splitting mind of a Supreme, establishing these differences without a distinction is the pinnacle of legal reasoning.

And they are praised for it.

Now imagine, a non-Talmudic reading of the Fourth Amendment. Bear with me. It requires perhaps the reading comprehension we expect of standard-issue 8th Graders:

The right of the people to be secure in their persons, houses, papers, and effects, against unreasonable searches and seizures, shall not be violated, and no Warrants shall issue, but upon probable cause, supported by Oath or affirmation, and particularly describing the place to be searched, and the persons or things to be seized.

How can anyone who hasn’t been fed a steady diet of lead paint chips from infancy onward come up with exceptions to the principle enunciated above?  There is no mention or even innuendo in the direction of a “compelling state interest” or “exigent circumstances.” And “implied consent”? Really? How can any normal brain come up with that one?

The answer is simple: Spend three years in law school.

Thank you for being a gun spokesman…