Almost ten years ago, I drove one of the first Nissan Muranos. In 2003, it was Dennis Kucinic to Barak Obama – or Ron Paul to Mitt Romney. 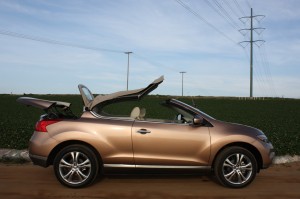 At that time, SUVs were… SUVs: Pick-up trucks with enclosed beds for passengers. They had room and they had utility – but they were about as sporty as a fat guy at a track meet. The Murano changed all that by changing the parameters. It was built to handle as well as haul. It looked sharp, too – like no other vehicle on the road, in fact. Swoopy, sport-sedan body – but riding high up off the ground.

Everyone else rushed to copy it.

Which is why, today, it’s no longer the standout it was back in ’03.

No doubt that’s why Nissan added the Cross Cabriolet to the Murano lineup last year. It’s still a Murano in name – but with radically different sheetmetal (including no sheetmetal above your head) and two big doors instead of four normal sized ones.

But how about the regular Murano? 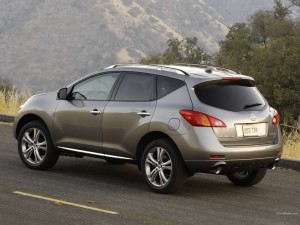 The Murano is a mid-sized, FWD/AWD crossover SUV that’s a bit smaller overall than other mid-sized crossovers (several of which offer a third row, which the Murano does not). It can’t carry seven, but it’s got ample space for five.

There’s a Platinum package for the LE that adds special Sapphire Black metallic paint and a 20-inch wheel/tire package, among other upgrades. Base models get a new (larger) LCD display monitor in the center stack. 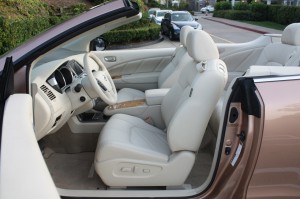 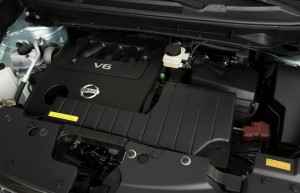 The standard – and only – transmission is a continuously variable (CVT) automatic transmission. The regular Murano offers FWD or AWD; the Cross Cab comes with AWD standard.

Expect a 0-60 time around 7.4 seconds for the lighter FWD Murano – and about 8.2 seconds for the significantly heavier (and thirstier) Cross Cab. EPA gives it a 17 city, 22 highway rating vs. 18/23 for the AWD-equipped conventional Murano.

A FWD Murano does a little bit better than that, earning an 18 city, 24 highway peg.

Still, they’re all thirsty – and that may be one of the Murano’s weakest selling points today vs. yesterday. In 2003, gas cost about half what it does now. So, it costs about twice as much to feed a vehicle like this. Other hungry hippo crossovers have the same vulnerability. The 2012 Ford Edge, for example, rates 19 city, 27 highway.

If gas prices sail up to $5 and more this summer as seems likely, watch out. There will be some great deals to be had on vehicles like this.

For those who can afford the gas… .

In 2003, nothing else looked like the Murano. Nearly ten years later, the Nissan’s bulgy, linebacker squat has been copied by almost everyone else to one degree or another. 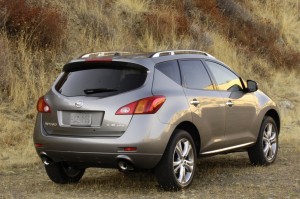 But few if any competitors have successfully copied the Murano’s driving dynamics.

With underpinnings sourced from Nissan’s Maxima/Altima sport sedans, the Murano handles more like a sport sedan than the cars most other crossovers are based on.

It doesn’t cope with corners; it likes to corner. There is a gravel road near me – one of those great (because scary) country roads just wide enough for a car and a half, lots of blind curves and a no-guardrail drop off to the right, where occasionally through the foliage you’ll spot a rusted relic, far down below. The Murano’s playground. It has the ride height to deal with the almost-off-road terrain; the dips and potholes that rip pieces off the lower things of cars. Of course, any SUV can deal with that, too – but the difference is velocity. You can drift the gravel in the Murano, control-sliding through the corners – then on the gas for the uphill.

Not that you would do such a thing, of course. But in the Murano, you absolutely can.

The optional AWD anticipates loss of traction and adjusts itself accordingly – rather than reacting to loss of traction after it has already occurred. Unsprung mass has also been reduced by replacing some suspension components with high-strength, lightweight alloy pieces.

On-road stability is also noticeably better than in the typical crossover – both at high speed and during high speed cornering. The tall wheels (20 inchers on the Platinum Edition I test drove) are firm, but there’s no bounce. It grips, plants – and does not lean. Steering precision is excellent, too. And – important item for those of us who like to drive – Nissan goes easy on the Nannyism. The traction/stability control stays in the background unless you’re really hauling the mail. And Nissan vehicles are the only vehicles left on the market that do not harass you with a buzzer that won’t shut up if you don’t “buckle up for safety.” 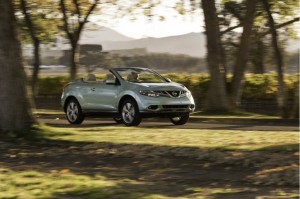 The only driving complaint I can gin up is the tunnel-view rearview view – a result of the liftgate’s relatively small glass area and the shape of that glass. But you learn to use your side mirrors and adjust accordingly.

I generally am not a fan of CVTs because of the (typical) racket they make and their thrashy operating characteristics. But Nissan builds an excellent CVT; it’s quiet and mimics the operation of a regular automatic under most conditions – while being more fuel efficient than a regular automatic. It also has seven “gears” (engine RPM points, really, because a CVT doesn’t have individual gears like a regular automatic or manual transmission) that can be toggled through in a manual/sport mode for when you want to hold a particular RPM range at a given road speed, rather than let the transmission run through its range automatically – as for example, when you’re descending a long grade and want some engine braking effect.

The real shame is the continue absence of a manual transmission on the Murano’s list of options. Nissan offers a six-speed with the same 3.5 V-6 in the Altima, which is the Murano’s DNA donor. It ought to be easy from a manufacturing point of view to offer the Altima’s 3.5 V-6/six-speed combo in the Murano – but so far, no dice. Even the Maxima – the onetime “four door sports car” – is now, very sadly, automatic (CVT) only.

Blame traffic – which is killing demand for manual transmissions. 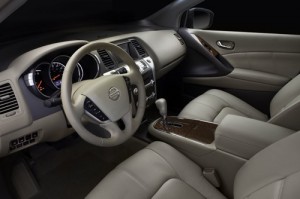 The regular Murano’s a familiar face – still attractive but no longer the head-turner it was back in ’03. The chief draw is not so much the curb appeal but the handsomely appointed interior, which remains four-seater intimate (though you can carry five) and looks and feels luxury – not mid-priced. It compares very favorably to its Infiniti cousin, the FX35. Each panel seems carefully fitted in place – not popped into place. Glove-soft leather; liquid-looking chrome accents. But the Murano doesn’t cost $43k to start.

The price is not unjustified. After all, you’re getting what amounts to a full-custom. The bodywork is entirely different – two doors, no roof. And like the ’03 Murano back in 2002, the ’12 Cross Cab is the chiropracter’s friend – everyone turns to look. 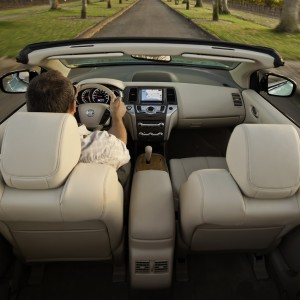 And driving it is an interesting experience. There’s no other convertible coupe on the road with such a commanding view – unless you’re driving a 1970 Bronco. But the Cross Cab doesn’t have metal floors and no-give seats and amenities that are limited to a cigarette plug, wing vent windows  and an AM radio. It comes loaded with everything – including the AWD system that’s optional in the regular Murano – plus the 20 inch wheels, full-leather interior, GPS navigation, premium Bose audio rig with 9.4 Gig music storage hard drive. Plus the extra 5 hp (which helps with the extra weight) and, of course, the power-folding soft top.

The other thing you get is backseat room.

There is no other vehicle on the market that’s both an SUV and a convertible and has such adult-friendly backseats. The Chrysler 200 is one of a very few four-seater convertibles that has non-waterboarding backseats – but it’s a car, not a crossover. The Range Rover Evoque comes as a “coupe” – but you don’t want to be in the back seats – and you can’t drop the top.

So, the Cross Cab is unique in form and function. The problem is the price. Objectively, it’s within reason. But $44k is also high-end brand territory – and intangibles such as snob status probably come into play.

Remember the Ford Thunderbird? The one from about 10 years ago? Really nice car. But also a $40k car. And not enough people were willing to part with $40k for a Ford. I suspect the Cross Cab is going to have – is having – the same difficulty. Nissan dropped the price by almost $2,400 from last year – and it’s really more than that, because of inflation (there would need to be a slight price increase from last year just to keep pace with the Fed’s printing presses). What does it tell you? It tells me the Cross Cab isn’t selling as well as Nissan hoped.

Probably, Nissan should have done the top-chop to the Infiniti FX instead. 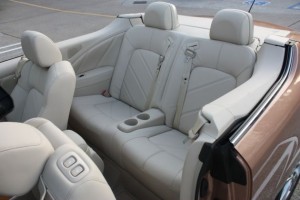 Now, luxury brands are somewhat immune to the pressures of gas prices and prices generally. But can Nissan – can Ford, can the other bread and butter brands – survive in this matrix? Can $30,000 vehicles that average maybe 18-20 MPG survive in a matrix of $5 gas?

I guess we’re gonna find out… .

Unlike back in’03 there are now a number of interesting to look at, interestingly laid out medium-sized crossovers on the market – including the Ford Edge. But the Murano’s still a cut above in terms of how it drives – and the new Cross Cab’s about as interesting as interesting gets.