Robert Biel, 57, of Brevard County, Florida, is going to spend the next year in prison. He must have done something pretty bad, right? Beat someone up, maybe? Steal a car? 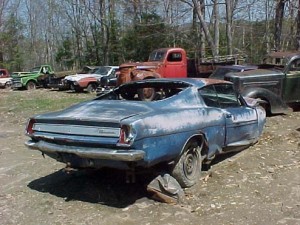 No, something far worse – in the eyes of our protectors in government:

He kept a bunch of old cars in his yard.

His yard. Not someone else’s. His – you know, the land he gets to pay endless rent to the government for as a condition of the perpetuation of the fiction that he’s the owner. Except of course, he’s not – and this business about sending him to the clink for a year proves it.

Biel stores old cars on his land, picking parts to earn money. The county commissars will not have it. First came the harassing letters. Then came the harassing fines. Next came the harassing men with guns – who took Biel to jail for “noncompliance.” He was released, but only on condition that he “clean up” his (cough) yard. When he failed to do so, he was sentenced to a year at Hotel Graybar for “violating probation.” A felony. (See here for the full new story.)

“It’s my stuff on my own property,” Biel argued.

Well, he’s just been educated about who is the real owner of “his” (cough) property.

What Biel enjoyed the privilege of paying annual rent to the government for is squatter’s rights.  He – and you, and I – may occupy a house or use a piece of property under certain conditions – conditions subject to being changed at whim of the landlord, the true owner, the government. We have every right to object – so long as we ultimately comply. If the government says you may not keep an old car – or just a car that’s not currently registered – on (cough) your property, then you’d better comply, or else. The “or else” being an escalator of coercion that begins with the little love notes received by Biel, followed in time by men in costumes with guns who will make sure you do comply, even if it means killing you to make it so. Which is what will happen if you have the audacity to resist – to actually defend (cough) your property. 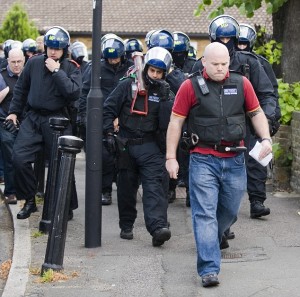 It’s important to note that no one – not even the government – accused Biel of actually harming anyone. You know, of having committed a crime. Well, at least not a crime in the old sense of the term, when “crime” necessarily entailed “victim.” Biel victimized no one. In fact, he helped people – by finding and selling car parts DIY mechanics needed to keep their cars running. But of course, you must have government permission to do that – and of course, pay the necessary tribute.

So off to the hoosegow he goes – and in all likelihood, back on the streets will go a real criminal, in order to make room for the made-up kind. American jails and prisons are full to overflowing with non-violent, non-criminals –  people who harmed no one but transgressed some arbitrary edict. Since there’s not enough space for all, the revolving door of justice swings rapidly – early releasing a Golden Horde of violent thugs, so that pot smokers and guys like Biel, who annoyed the local Aesthetics Police, can get a bed.

This makes sense – from the government’s perspective. A real criminal is a liability – to the government. He creates no wealth that can be confiscated and costs money to house and is a physical threat to the camp guards (whoops, “corrections officers”). But someone like Biel is profitable. He has assets to confiscate – and he (probably) is not physically violent – not being a real criminal.

This is key to understanding the apparently odd excessive attention the government and its enforcers give to penny ante “offenses” committed by people such as Biel. But it is excessive precisely because of the profit motive – from speeding tickets all the way up to the soon-to-be-here huge fines for failing to pay tribute to an HMO, as per ObamaCare. The government doesn’t give a damn about real criminals because real criminals don’t have anything to take away. That they create actual victims and cause real harm is a matter of complete indifference to the government. Remember: Members of the Inner Party have little to fear from real criminals. They are protected by multiple layers of security  – provided at our expense. Murder, assault, rape, burglary – abstractions merely. Realities for you and I – but we are the Outer Party. So different standards apply.

The criminals – the real ones – are the proles, of course. And the proles do not matter at all. They have nothing to lose – other than their physical freedom.

But Biel – and you and I – have several others things to lose first, before we lose our physical freedom. Which is why government is so inordinately interested in us, so zealous and unrelenting in its prosecutions of us.

You can jump a counter at a 7-11 with a baseball bat, beat the crap out of the clerk and pilfer the register – and end up doing less hard time than a guy like Biel, who dared to keep a bunch of old cars at his place. Not an exaggeration. It happens with depressing regularity. Watch the news; read a few stories about the latest home invasion/killing. Nine times out of ten, the criminals will be parolees. Let loose after having finished a small portion of their pled-down sentence.

To make room for a guy like Robert Biel. 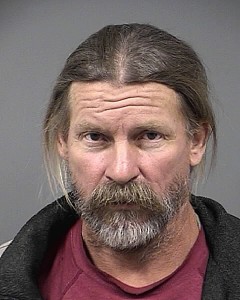