I almost have a motorcycle again – vs. a pile of unsightly parts! 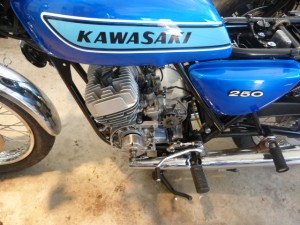 My rebuilt crank (fresh seals, new rod bearings – the works) arrived about two weeks ago all the way from Merry Olde England and since then I have devoted all available free time to getting the S1’s mighty-mite 250 cc triple cylinder engine back together.

Both case halves were glass-beaded during the downtime and then thoroughly washed clean of all abrasive media. (Don’t forget to do the bolt holes!) I decided to leave the cases bare aluminum rather than apply any coating. Though this bike will be ridden, it will lead an easy (and mostly indoors) life. It will not be rained upon if I can help it – and any spillage of oil will be promptly wiped away. This, I hope, will keep the bare metal looking nice for many years to come.

I also had new oil seals on hand for the clutch release rod, kicker and transmission shaft end. 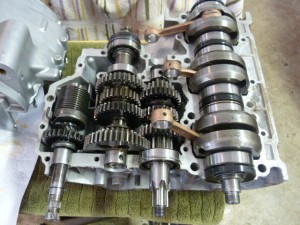 My bike’s original transmission was in excellent condition, with no significant wear apparent, so all I needed to do was clean the assembly up and prepare it for the resurrection. Same with the kicker assembly and other internals.

I reinstalled the shift drum in the upper case, then laid the new crank, the transmission and and kicker mechanism in their respective alcoves – checking for proper alignment and engagement of everything – and being absolutely sure – before proceeding to the next step, which was to spread a thin film of Kawa-Bond cement along the sealing surfaces of the lower case and then carefully lower it into place. You want to get this right because if you don’t and have to split the cases for some reason – because of something you forgot to do – you’ll face the tedious task of cleaning off all that Kawa-Bond before you can close up the halves again. 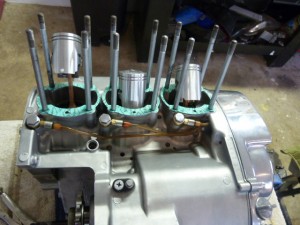 I torqued down all the case bolts per the manual and then let the assembly sit for a day before doing anything else. The engine won’t be running for a while yet, but I still wanted to give the seal all the time it needed to set before  proceeding. With triples, sealing is very important. If you have bad sealing,  you’ll have more than just a leak. The engine won’t run right, no matter what you do – short of taking it apart and fixing whatever you didn’t do right.

Next up, pistons and rings. I coated the needle bearings that each wrist pin rides in with assembly lube and eased the rings in place – being careful to line them up with the little pins Kawasaki thoughtfully provides in each ring land to orient them correctly. Be sure the arrows on the piston tops face the exhaust side!

Then I dabbed my finger in a cup of fresh Royal Purple oil and coated the internal surfaces of each cylinder bore before carefully lowering the jugs into place, one at a time. Since the S1 engine only uses two rings per piston, it is possible to use your thumb and forefinger (instead of a ring compressor) to press them into their lands as you ease the cylinder jugs down over them. The main thing is being careful – and taking your time. 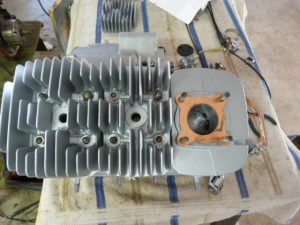 I tossed a new copper gasket onto the top end of each jug and then dropped the heads on and bolted them down. Just to be sure, I manually rotated the assembly using the kicker.

Now, the oil pump. Three lines run from it to a fitting at the base of each cylinder. The book says, incidentally, that when it’s time to start the engine for the first time, it’s imperative to manually hold the pump level to the WOT position to quickly purge any air from the system and to get fresh two-stroke into the engine, pronto. Normally, the pump action is controlled by a cable that operates in conjunction with the throttle cables that run from each carburetor to the right-hand grip.

After the pump, time to install the carbs. Some prefer to wait until the bike is in the frame to attach the carbs – and even the cylinder jugs and heads. In fact, the shop manual advises this.  But I’m strong enough to comfortably pick up an assembled two-stroke triple engine and get it into the frame – and much prefer the easier access to hard to reach bolts you enjoy with the engine still on the workbench. I also find it’s easier to do the preliminary manual synching of the carb throttle slides, because you can easily see them going up and down with the engine still out of the frame vs. in the frame. 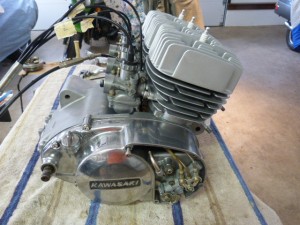 Now, at last, the Moment had arrived. Time to return the S1’s engine to its rightful home. So I first laid some soft towels on (and around) the frame tubes – to avoid nicking them during the install – and called upon my wife for her expert assistance. While I manhandled the engine into approximate position, she told me “higher” or “lower” or “a little bit forward” until I got the first of the mounting holes lined up with the right spot on the frame. Then she slid in the bolts for me.

The S-series bikes have a rear upper mount with two swinging tabs hanging off either end of the mounting boss (with a bolt running through that). The other end of the tabs mount to a boss on the frame. Getting this one done first will make the others easier because it helps to locate the engine in the frame cradle. Next do the front uppers – once these are in the, the lowers ought to be all lined up and you should be able to just thread the long bolts that go through them directly into position.

Button it down, stand back – and behold the awakening! 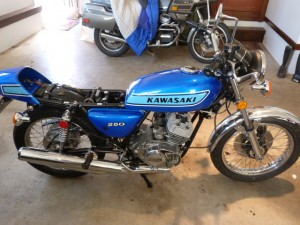 I still have to deal with one remaining – and probably expensive – stumbling block before I can fire the engine. I discovered a couple of days ago that my original exhaust pipes are not usable in their current state. I had hoped to use them to run the bike in, then either replace or refurbish them as money became available. But after 20-plus years of sitting, the pipes are clogged up with something inside – and I can’t get the baffles out to find out what that something might be. Three days of soaking in penetrant have  only resulted in oily, rust-laded glop running out of the back end. I suspect the baffles are rotted away – rendering the pipes redneck objets d’ art only.

Unfortunately for me, nice condition S1 factory pipes are almost impossible to find and NOS pipes  impossibly expensive ($2k is the usual asking price if you can find a set). My best option seems to be a set of aftermarket Denco-style chambered pipes – which I also found in the UK (see Higgspeed.com). They’re not cheap, either – about $800, including the cost of shipping. But they are gorgeous – and superior to the stock pipes in every way except originality and I can live with that.

So, it’ll be a few weeks before I can amass the necessary coinage – and the another couple before the pipes are here and on the bike. I am hoping to have all my ducks lined up for an engine start around the end of April.