So goes the not so famous line of Fred G. Sanford. 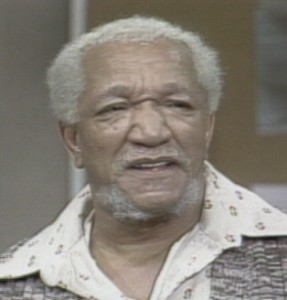 Today on television it seems every time I turn around there is another junk show. The premise of all these shows are people who search out and buy various forms of “junk” and sell it at a profit. But I wonder who is the audience for these shows? Americans generally are buy-consume-throw-away. There is generally a dislike of “junk.” By “junk” I mean anything that is old, needs repair, obsolete, etc. All to be tossed aside for the new.

We live under laws that work to prohibit anything the typical consumer would toss out. That have no understanding of why someone might want an old car for parts or to restore. Throw it out, get rid of it. That’s the American way and you’ll do it that way or else.

So where is the audience coming from? The pro-junk minority certainly couldn’t keep this many shows going. After all they have shows on hoarders which by using extreme cases are essentially making anyone who keeps stuff instead of consuming it appear to have a disorder. My wondering has me thinking… what if it isn’t the junk?

On every show it’s about making the find, the score, and selling it for a profit. Who are these people? Individuals. People making a living outside the corporate system most of us are stuck in. It’s not a great business but they make a living at it. They’ve found a hole in the system. Something that hasn’t been regulated into a corporate cartel.

Is it the people? I don’t know? But I think it must be these characters and the hunt they are on. The natural appeal of freedom.

What is TV but an escape for people? An escape from their daily grind in the machine. Here we get to see people that are still living outside the machine. For now. (The machine has been turning its attention to second hand stores and the like these days)

On top of the junk shows we have the cast of know-nothings about mining stumbling their way through finding gold in Alaska and countless others. The viewers have to be coming from somewhere… but we know the busy bodies are on the watch. Someone called the feds on the gold miners.

What’s going on? Where do the viewers come from? Why do they watch?

Is the minority of freedom loving people bigger? Is there an underlying instinct being tapped?

I don’t know. But suddenly there’s a lot of TV for lovers of junk and freedom. Then again maybe it’s something insidious or materialistic that I am blind to.

Reader Question: Where Are the Bodies (Again)?