About a week ago, I did an article (here) about my V1 radar detector being triggered not by police radar but by the radar (and laser) signals emanating from many new cars – specifically, cars equipped with lane departure and blind spot warning systems. I asked Mike Valentine, who runs the company and designed the V1, to comment on the issue. He most graciously did so, at length – and answered some questions I’d never even thought to ask. It turns out I was not imagining things, the problem is real. And it’s more than just the latest gadgetry being installed in new cars. Not surprisingly, there’s a government aspect to this mess, too.

Without further ado, I turn the floor over to Mike:

You are quite correct that there is a profusion of sensors congregating on and around our highway travels these days. More signals being received that are not due to speed traps certainly complicates detector usage and is a spur to detector improvements. Let’s talk about some of the new trash-signals and what can be done about them.

1) “Blind-spot-warning” or “lane-change-assist” radar sensors mounted in the rear of new cars. These devices transmit on K-band because of world-wide radio-wave regulations. But, because they are used for short range sensing and need to measure range to function, they differ in signal type (FMCW) from the radars used by police. These signals can be significantly reduced in annoyance by making programming adjustments to the V1. Our latest version of V1 (with “ESP” markings below the volume control) does a pretty good job of eliminating the majority of these signals by engaging option “t” in the function list.

2) Speedinfo.com traffic monitors. These devices are presently installed in only a few states, but where they operate they cause considerable mayhem. They operate on K-band to periodically sample travel speeds along major thoroughfares. They produce 1/3 second bursts every several seconds, imitating instant-on speed traps for detector users. Again, our software programming selection “t” does a great job of eliminating these K-band nuisance signals.

3) Radar-based cruise controls. These devices operate on a completely different frequency band from police radar and don’t cause any trouble for V1 users.

4) Laser-based cruise controls. These systems are most often found on Infiniti cars and SUVs equipped with the premium electronics package. Unfortunately, the pulse repetition rate of the laser output is pretty similar to that employed by speed-trap laser guns. We’re working on a solution, but it will require significantly more complex processing and is not an easy task.

These signals present a dilemma for detector makers: How to reduce the annoyance from non-speed-trap signals and yet not diminish dependable warning for real speed-traps. Of course, the world was ever thus.

When detectors were quite new 40 years ago, separating police radar from radar security and door-opening sensors was already an issue. With the poorly performing detectors of the day, few non-police signals were detected. Escort in 1978 advanced the warning range so much that it necessitated a “city/highway” switch for reducing the annoyance from non-police signals that was promptly imitated throughout the industry. Even so, some users thought that the Escort beeped too much and preferred more poorly performing detectors since the “city/highway” switch was not perfect in totally eliminating extraneous warnings. They wanted perfection in an imperfect world and would trade less warning range for more “quietness.” However, the challenge of detecting “instant-on” radar traps far in advance made modest detector range obsolete.

Once the Valentine One’s level of warning range was achieved, the need for more information became obvious. The number of automatic door sensors within detection range increased to the point of confusion. Radar location by indicator arrow gave users a new way to sort the wheat from the inevitable chaff. The ability to locate the signal source also gave the V1 new capabilities for algorithms to help automate the signal sorting task, providing automatic muting of alarms once they had passed behind the vehicle. 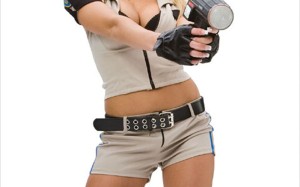 Then, with the continued proliferation of K-band automatic door sensors, we introduced Savvy. Connecting the V1 with a car’s under-dash diagnostic port, it uses the speed signal to reduce door-sensor annoyance while traveling at slower speeds without completely blocking real speed radars.

Newer radar- and laser-based signals sources alongside or traveling on the roadways increase the challenge to effective detector use.

We’re always working to improve V1’s performance and our engineers are hard at work on new developments. When, not if, they will become production-ready is the only question.

Postscript: I also asked Mike about the possibility of having older V1s like mine updated with the “ESP” filter he discussed above. Herewith his response:

To obtain an upgrade, one must return the V1 to us.  Please go to our web site (here) and enter your V1’s serial number at the upgrades prompt. That action will lead you to an explanation of what upgrade we suggest and the price of the upgrade. If found satisfactory, one proceeds to fill out the upgrade web order form, print it on your printer and enclose the finished form with your V1 as you send it to us. It should only take several days, plus two-way transportation, to turn it around.