You probably know all about checking the air pressure of your car’s tires to make sure it’s up to spec – columns like that are as inescapable as “news” stories about the Kardashians. So I thought it might be good to mention five things about cars you may not have heard about: 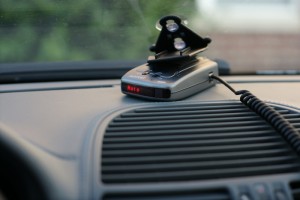 * Radar detectors and some new cars may not be compatible –

That’s because a growing number of new cars radiate their own radar (and laser)  signatures, which can trigger false alerts. A  radar detector is a receiver; it detects the signals emanating from a cop’s radar gun. But it will also detect signals emanating from your car’s radar (or laser) assisted cruise control or similar in-car technology. I use a Valentine 1 – considered to be one of the best radar detectors available – and in certain new cars I’ve test-driven, the device was rendered effectively useless by the vehicle’s factory electronics. Each time the car’s “active cruise control” (as an example) sent out a pulse, it triggered a V1 false alert – lights flashing, warnings beeping. I could not filter out the “noise” coming from the car, perhaps because in most cases there is no way to fully disable or turn off the systems that emit the signals that cause the noise – and cause the detector to false-alert.

It is also possible that the use of a radar detector in a car that emits a radar (or laser) signal could cause a problem with the car’s systems. I’ve noticed stern warning labels affixed to the windshield of some new cars I’ve test driven recently specifically warning against the use of radar detectors – and that any problems resulting from their use will void your warranty coverage.

*  Some new cars don’t have dipsticks – 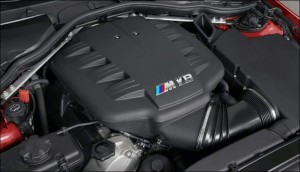 In some late model (circa 2006 and newer) BMWs – also Audis, Porsches and Mercedes Benzes –  the only way to check the oil level is by consulting (cue Dr. Strangelove voice) a computer. The physical dipstick under the hood has been eliminated. Instead, there are sensors built into the oil sump tied into the car’s computer/driver information center. The owner surfs through a menu to check the oil level without ever having to raise the hood. On the upside, you never have to get your hands dirty. On the downside, this way of checking the oil level adds a layer of arguably unnecessary technology – replacing a simple, virtually foolproof way of doing the job with one that depends on electronics (and software) that by its nature is both more likely to eventually experience bugs (for example, the in-sump oil level sensor getting covered with varnish over time)  and cost you money when those bugs crop up.

Ironically, the cars that tend not to have dipsticks anymore – BMWs, especially – are also among the most (supposedly) enthusiast-oriented cars on the market. You’d think enthusiasts – gearhead types who like to do things themselves – would want to check their oil themselves, too.

Apparently, not so much!

Most new cars have “smart” air bags – meaning, there are weight sensors embedded in the seats that tell the system whether there’s a person sitting there – and also how big a person is sitting there. The air bag is then either turned off – or on – and its potential rate (and force) of deployment adjusted to accommodate a small – or large – adult. Or a child. Usually, the system is also tied into the seat belt warning system. If there’s no one in the seat, there’s no seat belt chime if the belt’s not buckled. That’s the theory. In practice, these smart air bags can be pretty dumb, too.

In at least a half-dozen different make/model new cars I’ve tested recently, all it took was a duffel bag – or a bag of groceries – to convince the system that a person was sitting in the passenger seat. In one case, it only took the weight of a “Mile High” turkey breast sub to do the job. The “passenger air bag on” light illuminated – and the annoying buckle-up buzzer commenced its racket.

Unfortunately, I’ve yet to find an off button for either the buzzer – or the air bags. 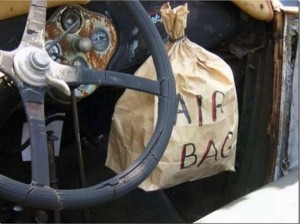 Many – probably most – new/recent vintage vehicles have plastic-composite fuel tanks instead of steel, as in the past. Just as many late-model vehicle engines have plastic intake manifolds and other parts instead of cast iron or aluminum parts. And the reason in both cases is the same: Saving weight and simplifying the manufacturing process. Each pound shaved off the curb weight of a new car translates into a potential fuel economy benefit – a major concern for automakers faced with the prospect of meeting a government-required fuel efficiency standard of 35.5 MPG on average by model year 2016 – just around the corner. Also, it’s easier to mold complex shapes out of plastic – and achieve near-perfect uniformity on a mass-production scale. That reduces manufacturing costs and also potential warranty costs down the line. An additional plus is that unlike steel tanks, plastic tanks never rust out – which would be a significant problem nowadays given 10 (and possible soon 15 percent) alcohol content “gas.” Because alcohol-laced gas attracts water – and water accelerates rust. But with plastic tanks, it’s not an issue anymore.

* AC service may be about to get more expensive (again) –

In the 1990s, the automotive refrigerant R-12 (Freon), which had been in use for decades and was used in every then-new car’s AC system, was pulled off the market over concerns about its effect on the ozone layer. It was replaced by the current refrigerant, R134a. In the meanwhile, older cars with R-12 systems became much more expensive to service and maintain – because of strict regulations governing who could handle it (only certified technicians, so no more do-it-yourself charging kits) and heavy taxes on the remaining stocks of replacement R-12. A can of R-12 that sold for $5 suddenly cost $40 or more – and you couldn’t even buy it yourself, anyhow. 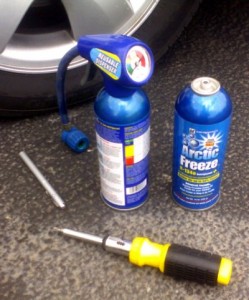 Well, the Europeans have just banned R134a. (See here for some news coverage.) This will put – is putting – a lot of pressure on the use of R-134a here, both practically and politically. Practically, because now the car companies have to design different AC systems, one for the European market (using C02 or some such) and for the U.S. market (using R-134a) adding a layer of cost to their operations and so to the bottom line price of the cars. Politically, because if the U.S. doesn’t ban R134a, it will be smeared as “harming the environment.”

If R134a is banned – and it probably will be –  expect a scenario similar to what happened with R-12 back in the ’90s: Do-it-yourself recharge kits will no longer be available; you will have to get your R-134a-using car’s AC serviced by a technician. The R-134a itself will double or triple in cost. The technician will be required to use (and so, buy) expensive equipment to do the work – and will past the costs on to you.

So, now might be a good time to stock up on a case of R-134a recharge kits.

Will You Submit & Obey?