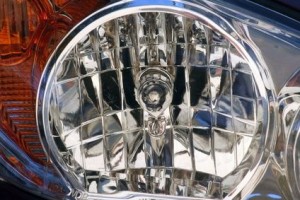 They didn’t yellow and haze over like a 90- year-old man’s rheumy eyes – like modern plastic headlight “assemblies” always do after just three or four years. Then your car looks old, too. While it’s true the modern plastic “assemblies” are brighter when new, when old, their light output drops as the outer lenses fog up. Sometimes, you can cure this by polishing the outer plastic but if you aren’t vigilant and don’t catch it in time, the yellowing is often too far gone to do anything about short of replacing the “assembly” – each of which typically costs $150 or more. And then you’ve just re-set the clock. In another three or four years, you’ll have to do it again – or live with the ugly, old-man-looking headlights.

Glass headlights never yellowed – and when you needed to replace one, the cost was (and still is) about $25 or so. Is the trade-off worth it? Maybe – maybe not. One thing’s for sure. Thirty or forty years down the road, replacement “assemblies” will probably be unavailable for most current-era cars.

In contrast, you can still find new headlights for virtually any car made from the Model T through the early ’80s.

Plastic headlight assemblies: They part of the built-in life-clock of modern cars. 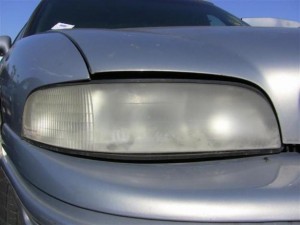 Oh, and you can thank the government. Plastic headlight assemblies are lighter than glass headlights. Several pounds can be saved per car – and several pounds less  per car means slightly better fuel economy per car. It’s one of the ways the car companies try to counterbalance the growing beef of cars resulting from (here it comes) government mandates. One mandate (bumper impact standards, for example) results in higher curb weight. Another mandate says the car must deliver “x” MPGs. The first one results in a heavier car – the second in pressure to lighten the car up somehow.

Plastic headlights are one way how.

LED lights. Many new cars have these, two. They’re very pretty. And they’re also pretty expensive. Each LED light can cost $20. Some models have a dozen of them built into the brake lights. And at least in my state, all of them have to be working in order to pass the mandatory annual safety inspection.

Don’t forget the CHMSL – the third brake light. There’s often LED lights in there, too.

Plastic intake manifolds. Saves a lot of weight (maybe five pounds or so vs. 30 or 40 for an old-style cast iron manifold) and easy to manufacture to precise tolerances and in shapes that would be hard if not impossible (economically) to do with iron or even aluminum. That’s the good part. The bad part is that plastic is less long-term durable than iron or aluminum. Iron is almost impossible to hurt. Aluminum is tough, too. Manifolds made of either will usually last for a human lifetime if not longer. But plastic has a shorter shelf life. It is also easier to crack. And plastic decomposes – literally begins to crumble and fall apart – after about 20 years.

These things aren’t an issue – usually – for the first ten or fifteen years or so. But after that, to quote OJ – look out.

This is another reason why today’s cars will probably never be classic cars thirty or forty years from now. They’ll be recycled long before then – because it’ll be difficult if not impossible (economically and otherwise) to keep them operable. At least, not without gutting and replacing the original components – and even entire drivetrains – with whatever’s available thirty or forty years hence.

Where am I going with this? 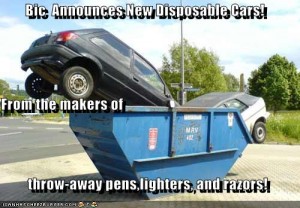 I’d like to see less-disposable cars again. Cars that can be kept almost indefinitely – as opposed to cars that are superb for about fifteen years or so – but then rapidly deteriorate beyond the point of economic salvation, let alone resurrection. This is the opposite of the way cars used to be – before the mid-80s or thereabouts. They were often far from superb when new – and almost always showed signs of decay within five years or so. Paint would fade; engines would get loose. But, they were fixable.  Almost indefinitely so. And relatively cheaply so, too. The engine in my ’76 Trans-Am, for example, is a 400 pound lump of cast iron that can be fairly easily and fairly cheaply rebuilt almost without end. A $2,500 engine rebuild will last about ten years – and ten years later, can be done again for the same amount of money. This can be repeated almost indefinitely.

There are 100 year old Model Ts still in roadworthy condition; people still drive 40-50 year old VW Beetles every day. Sure, they need This or That more often than a brand-new car. But This is usually cheap and That is usually easy – not so much with anything new.

And when the new car is 40 or 50 years old, good luck finding a replacement headlight “assembly” – or a new replacement plastic intake.