Authorities in Michigan say that the government-ordered eradication of pigs within the state is necessary to eliminate invasive species from farm to farm. Mark Baker says it’s all hogwash. 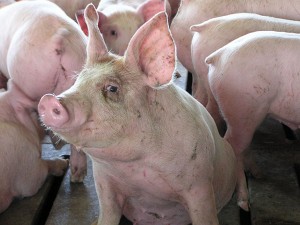 Beginning on April 1, officials in the state of Michigan have the authority to enter the private compounds of area farmers, inspect their swine and then shoot to kill. It’s allowed under the Invasive Species Order (ISO), a controversial legislation established this year to eliminate what the state calls “feral pigs.” Others are calling it animal genocide though. Mark Baker of Bakers’ Green Acres farm in Marion, MI is one of them.

“I’m one of two farmers in Michigan that has said we will not comply, and we have filed suit against the Michigan DNR and we’ll probably go to court with them this summer,” Baker tells RT of the war on farmers waged in his home state by the Department of Natural Resources. That’s the group that says certain pigs should be considered feral because they believe them to be problematic for the state’s health and thus must be handled accordingly. Baker says his pork-producing hogs aren’t the problem though.

“They consider me to be a felon,” claims the farmer, who tells RT he vows to fight for his right to decide which animals he can have on his property.

“Any animal or even a human being can become feral and I suppose that the behavior of that animal or human being could become a problem,” he explains. But declaring a hog “feral” goes against the whole purpose of maintaining a farm, he suggests. “I’m a farmer. My thing is I keep my animals where I want them, so I build fences so they stay on my farm and they don’t go live in the woods or my neighbors’ house or anything like that. That’s our goal as farmers, to keep our animals where we want them.”

Why are state officials trying to take that right away then? Baker says he believes the Michigan pork producers are behind it, and, maybe on a larger scale, the country’s federal farming agencies. “These are the guys that raise pigs in…confined animal feeding operations.” The farmer adds that he’s found the paperwork that publishes the names of supporters of the ISO, and it doesn’t come as a surprise to him to see who is lobbying for laws against small time hog farmers. There are names on there like Michigan Pork, Michigan Milk, Michigan Poultry and Michigan Potatoes. Also on the list, he says, is Greestone Farm Services.

“Those are the guys that supply the money,” he tells RT.

Those are also the guys, according to Baker, that are producing lower-grade pork while at the same time telling small-time farmers they can’t harvest their own hogs based off of characteristics, such as the pig’s hair color or hair pattern.

“Basically there is no difference between the two,” he explains. “Mine are raised outside. The meat in mine will be redder and more tasty because they are outside. They have sunlight, they get to root in the dirt and all that good stuff that they’re designed to do.”

And the other guys? “Those are the other white meat,” he says. “They never get to see the light of day so their meat is pale and tasteless and all that stuff – and that’s fine if they want to do that, I don’t care to eat that.”

The problem, he says, is being told that he can’t keep the pigs he wants. “This is still a constitutional republic that we live in and this declaratory ruling that the DNR has put forward is unconstitutional and it’s unlawful and it cannot stand in this country. Where will this end if government regulators are going to tell us how we raise our animals and what we can raise? That’s our business.”

Baker says he intends on keeping it that way.

“I don’t think they thought there would be such an extreme reaction from us, but farmers by nature are a very radical people and very tough and they never give up,” he says. “I’m 52 years old. If I was going to give up I would have done it 30 years ago. And I will not give up.”

Reprinted with permission from Russia Today.

GM Doubles Down on Turbos