When a belligerent Baltimore, MD cop forced his way into the home of 90-year-old Venus Green – sans search warrant, sans legitimate probable cause – and proceeded to ransack the old lady’s home,  as well as the old lady herself, the old lady took action. As the thug scrum made its way into her basement, Green bolted the door – locking the thug in her basement, much to his porcine discontent.  She later secured a $95,000 settlement from the city of Baltimore. 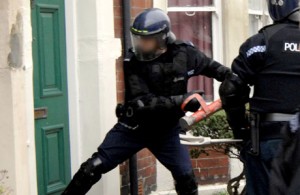 (See here for news coverage of this story.)

As they say Down Under, good on her!

And lucky, too. In similar situations, the victim of the thug scrum is also often the victim of much worse than merely being shoved aside, pushed to the floor and handcuffed – as happened to Mrs. Green. Had she been able to physically defend herself, she very likely would have been Tazered – or shot dead –  for “resisting.” Irrespective of the fundamental lawlessness of the thug scrum itself. The situation in this country has deteriorated to the point that anything other than becoming immediately supine and limp can be construed as “resisting” – with lethal consequences for the “resister.” Even when the “resistor” has committed no crime; even when the “resistor” is in his or her own home and thug scrum cops have forced their way in on no or extremely shabby pretext, as happened in the case of Mrs. Green.

Her son Tallie had been shot – someplace else – but because he lived in Mrs. Green’s basement, the cops decided that gave them sufficient authoritay to break into her home, physically assault the 90-year-old woman and ransack her dwelling.  “I am a law-abiding citizen. I’ve never been arrested, I paid my taxes, owned my home, my husband died 34 years ago. I raised my son and I have been brutally abused. I feel like the police department needs to go back to school,” Mrs. Green told local TV affiliate WBAL. 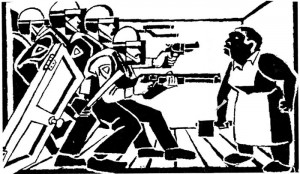 Actually, the police department needs more than remedial education – based on the $17 million in police brutality settlements it has been forced to pay out over just the past two years. WBAL-TV described two examples: One couple that claimed they were illegally searched and harassed by police looking for drugs has been approved for $155,000. A motorcyclist struck by a Baltimore cop is due another $115,000. Here’s a delightful video of a 300 pound Baltimore porker going steroidal over a scrawny 14-year-old kid on his skateboard:

Just another case of authoritarian over-reaction. At least, this one got uploaded to YouTube for all the world to see. Here’s another: A thug Tazering an old man sitting on his couch, whose “crime” was his refusal to Submit and Obey to a thug cop’s barking orders in his own home. The old guy wasn’t even “resisting” – unless sitting on the couch constitutes “resisting.” He had previously fallen down some stairs and scraped himself up a little. He didn’t want to go to the hospital. And he wanted the cops out of his home. This proved sufficient “cause” for the cop to point his little laser-dotted weapon at the old guy and Tazer him. The thug-in-uniform yells “stop resisting” repeatedly as his clearly not resisting 64-year-old victim writhes on the floor. Check it out:

And the fallout from the Green case continues to spread.

More and more, ordinary people are beginning to see the truth behind the facade of “Serve and Protect.” That the only reason they haven’t been the victim of a thug scrum is simply luck – or that the circle hasn’t yet widened enough to encompass them. But the circle is widening. Any of us could be the victim of a thug scrum.  Old or young, man or woman. 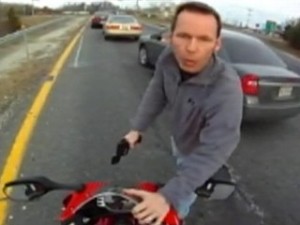 Arbitrary searches and seizures have been normalized; to even voice objection is enough to trigger the thug scrum. But we have a way to fight back – the way Mrs. Green fought back. The way those kids in the video fought back. Videoing dirty deeds done under color of “the law”  is a potent weapon – far more effective than attempting to physically resist. Which of course is why the doers of dirty deeds are so fulminatingly furious about being video’d. Their own line – “If you have nothing to hide, what are you worried about?” – apparently only goes one way. Check Food Lovers Specials and Game Specials.

Which is why we – all of us – ought to be even more adamant about making sure they have nothing to hide – and revealing it to the world when they do. Recording cops is still legal in most places and even where it isn’t, do it anyhow. Just be discreet. Don’t make an issue of it while you’re under threat of a thug scrum. Get your footage, then upload and let the chips fall in the appropriate direction.

Or just lock the SOB in the basement.