Is there any reason to drive a car with a manual transmission today? It’s a question I’ve been pondering lately. 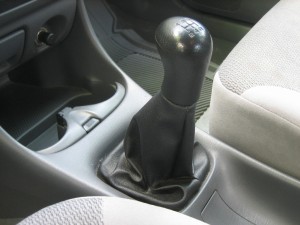 Most of the cars I’ve owned had sticks. My first new car, which I got when starting college, was a ’79 Plymouth Champ – same as the Dodge Colt back then. What a hoot that little car was! It had something unique at the time (and something I haven’t seen in a car since): a split shifter. There was a separate lever next to the four-speed gearshift, with options for Low and High range (or maybe they called it Power and Economy – I can’t recall). Theoretically, you should shift through eight forward gears! And two reverse gears! It was great fun to play with, and to show to friends I let behind the wheel.  But on a day-to-day basis, I kept the lever in Low when accelerating and just used the High setting as a fifth gear on the highway. It was cool, but not really that useful – a conventional five-speed was simpler and just as effective.

Since then, I’ve owned a mix of manuals and automatics. I stuck to manuals until I had been living in New Jersey for a few years. After getting stuck in snow storms and traffic jams and having my left leg go numb after hours of clutching, I broke down and traded for an automatic. The automatics I had – both Honda-made – were smooth-shifting and trouble-free. I missed “rowing my own” from the start, but traffic became much easier to bear.

A couple years ago, I moved to the Atlanta, Georgia, area. Traffic here is as bad as Jersey, if not worse. But my daily commute is very short and I normally take local roads when doing my errands, so I can usually avoid the worst of it.

This week I traded in my ’05 Honda Accord V6 Coupe for a new Accord Sport. The coupe was an excellent car and I’d had no trouble with it. But it had an automatic, and I’d been getting the itch for a stick shift again. The local dealership offered me a great trade-in value for my ’05, and they negotiated with me to a price on the new one that I was comfortable with.  After trying to convince me to go with a CVT – which I drove, and I was impressed, I admit – they found me a 6-speed manual at a sister dealership. The sale manager said it was the only one in the Southeast, so I guess they’re not much in demand these days.

And it’s a joy to drive a stick again. Honda’s shifters are famously smooth, and this one just snick-snicks from one gear to the next.

But it felt odd the first couple of days – it had been a while since I’d driven anything with a clutch. And the right side of my brain has been telling me at times that I should have gone with the CVT, for purely practical purposes.

I don’t regret my decision, though – not yet, at least. It’s just so much more engaging to drive a manual. I feel more alert behind the wheel. In a world moving quickly to self-driving cars, I’ve taken a step backwards. And I like the results. It feels right.

To the folks here at EPautos.com, this would make sense. But a “normal” person would scratch their head. They’d say to me: So you’re giving up the convenience of not having to shift in traffic? And you’re getting roughly the same acceleration and less MPG than the CVT? And the price of the CVT wasn’t much more than the manual? So how does that add up?

Of course it doesn’t – not at the level of pure reason, anyway. I’m reminded of an episode of “Car Talk” I heard in the early ‘90s. A woman caller was explaining an argument she was having with her boyfriend/husband about getting a car with a manual transmission (he was for it, she was against it). And she was wondering why guys like driving sticks, and what practical reason there could be for going with a manual in this day and age. Click and Clack were typically gracious to the caller (and her gender), and they joked that it was some outdated instinct that men have – a need to feel they’re in control. Just what you’d expect from NPR.

Putting aside the gentle male-bashing, though, there’s probably some truth there. Conventional automatics have improved much over the years, and newer technologies (CVTs and DSGs) are as fuel-efficient and fast as a manual, if not more so. There may still be an advantage of a manual performance-wise in the smallest of cars that are only available with conventional automatics. But once CVTs make their way to these models, even that rationale will disappear.

Some of us, however, like cars, and some of us enjoy driving. Driving a manual is just more fun than driving an automatic, even the best automatic. Practicality be damned!

It reminds me of the transition from vinyl albums to CDs in the ‘80s and ‘90s. I was an album junkie, and I was one of the last hold-outs in converting to CDs. Friends would ask me why I didn’t switch over – CDs had no noise, were more convenient and durable, etc. But CDs sounded awful initially. There was no warmth  to music played on a CD player. Most of my friends couldn’t hear what I was talking about, and they probably thought I was being snobbish. But there was something ineffable missing from CD music. Sure, the vinyl had more pops and noise at times, and was harder to handle. But listening to a good-quality vinyl pressing on a good sound system could be a transcendent experience. In comparison, CDs sounded sterile, flat.

Eventually the CD technology got much better, the sound quality improved tremendously, and I was won over. But I think history bears me out. Vinyl is back, especially among the hipsters. Even today, several decades after the advent of digital music, this antiquated analog technology still has its enthusiasts. Here’s one recent story saying that vinyl sales are at a 10-year high:

It’s like that for sticks. For the average Clover, who thinks of a car as merely an appliance, automatics are the only option. The less involved he (or she) is in driving, and the more he can focus on his smartphone, the better. Automatic braking and steering – bring ‘em on! Self-driving cars can’t get here fast enough for these people.

But for those of us who like cars, who like driving, “rowing your own” is going to continue to have its appeal. And who knows? Maybe the percentage of manuals will start increasing again. After all, the car companies have to give us some reason not to just take the bus.