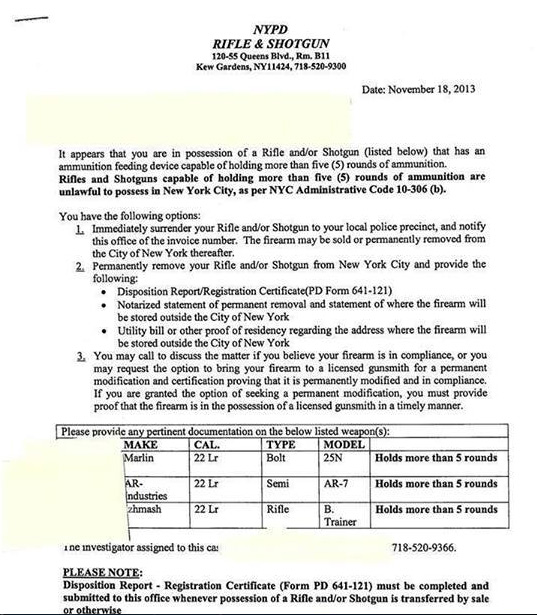 In the wake of New York’s latest gun control law, the New York Police Department is now sending out notices to registered gun owners demanding that they give up their firearms, clear proof that gun registration leads to outright confiscations. 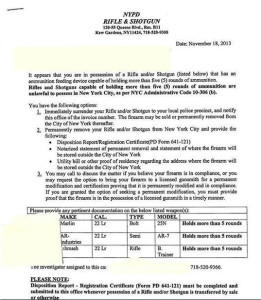 The letter being sent out to New York City’s gun owners who now possess “illegal” firearms. Click to enlarge.

The notice provides gun owners, who possess firearms now prohibited under New York’s unconstitutional SAFE Act, the “options” to either surrender their firearms to the police, remove them from the city limits or otherwise render them inoperable.

The NYPD knew exactly who to send the notices to by using a centralized firearms registry which lists the city’s gun owners and what firearms they have in their possession.

With the gun database already in place, the police merely needed to compile a list of firearm makes and models now banned under the SAFE Act and send the notices to the appropriate owners.

The SAFE Act, which was passed by the state legislature and signed by the governor on the same day in January, has numerous, draconian provisions including, but not limited to:

– Outright ban of magazines holding over 10 rounds
– Restriction on more than seven rounds being loaded into a magazine; the limited exceptions do not include home defense
– Mandatory background checks for ammunition
– The creation of a firearms registry for what the state considers “assault weapons”
– A requirement for firearm permit holders to fill out a form to keep the state from publicly identifying them

These unconstitutional provisions and the overall law itself have met significant resistance.

Erie Co., N.Y. Sheriff Timothy B. Howard publicly stated that his department will not enforce the SAFE Act, adding that the law is one of the strongest examples of the government not listening to the people.

“It’s an unenforceable law and I believe it will ultimately be declared unconstitutional,” he said during a press conference. “Do you want law enforcement people that will say ‘I will do this because I’m told to do this, even if I know it’s wrong?’”

Earlier this month, Howard won his re-election due to his stance against the gun control law.

“The SAFE Act was a major issue in this [Erie Co. Sheriff] election,” Carl J. Calabrese, a political consultant, said to the Buffalo News. “A lot of people in Erie County, both Republicans and Democrats, are hunters, gun owners and shooters … These are motivated people who get out and vote.”

“In a low-turnout election year like this one, it can make a huge difference.”

Howard told the newspaper that he did what he thought was the right thing to do.

“People in Western New York feel strongly about the Constitution and Albany’s misreading of it,” he added.

While the City of New York’s notice proves that gun registration leads to outright confiscations, Howard’s re-election also proves that Americans are beginning to reassert their birth rights as recognized by the Constitution.

(H/T: The Truth About Guns)