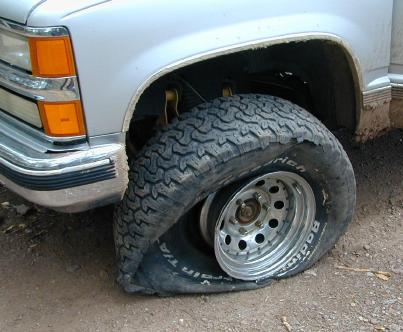 I recently did a column about the burbling war between the Safety Nazis and the Mileage Mussolinis (see here). Well, here’s the first casualty:

Because your next new car probably won’t come with even a mini-spare – let alone an actual full-size spare tire. The latter has been MIA from all-but-large-luxury cars (and trucks) for years, partially because the available trunk real estate of the typical new car is much less than it was in the past.

But now, as the automakers scramble to find ways – any way – to achieve compliance with the latest round of CAFE federal fuel economy mandates (set to increase to 34.1 MPG by 2016)  the American Automobile Association reports that even even the downsized mini spare is being thrown in the woods in favor of run-flat tires and aerosol cans of Fix-a-Flat tire sealer-inflator (see here). Because even a mini-spare and the flimsy jacking equipment that comes with it amounts to 40 or 50 pounds of extra weight. By removing this weight, the automakers hope to get a fuel economy freebie. Not a big one, mind. But even a half MPG improvement counts toward their CAFE averages – and even better, it can be done at no cost to them.  The “safety” of the car is not affected – at least, not in the way that the government defines “safety.” Removing the spare and jack doesn’t render the car any less crashworthy – so the Safety Nazis are not aroused and the Mieage Mussolinis are propitiated.

Well, you won’t be if you end up with a flat that can’t be fixed with Fix-a-Flat (such as a sidewall puncture or tear). And you can only run so long – and far – on run-flats. Like mini-spares, they are not designed for sustained use. They are designed to let you limp down the road to the nearest tire store – that’s it.

But what if there is no tire store nearby?

Outside of the DC Beltway and other major metropolitan areas, it is possible to find yourself far from a service station – or even a tow truck. What then?

Such a thing is of course beyond the everyday experience of the Urban-Suburban Hive that is home to the “policymakers” who chuck out edicts such as CAFE – hence, it is of no consequence to them.

But it could have real-world consequences for you.

There are cell phones, of course. And “concierge” services such as GM’s OnStar. Neither of which are immediately helpful in the way that being equipped to slap on a spare and get back on the road in 10 or 15 minutes is. Instead, you’re to be left to the good offices of chance.

Hopefully, your cell will get a signal. Maybe they will send a truck.  With luck, it will get to you sometime today.

Meanwhile, you and yours will sit by the side of the road – perhaps a road in a not-pleasant area, perhaps a highway with lots of traffic whizzing past, oblivious drivers at the wheel … and wait.

It’s also worth noting that the tire sealant goo ruins the government-mandated tire-pressure monitors all new cars have (and which you get to pay for, too). And goop-fixed tires can be dangerous to the technician who dismounts the damaged tire from the wheel in order to fix it. So be sure you tell him you used the Fix-a-Flat.

One again, the same soundtrack: Decisions issue forth from Washington. The effects are felt by you and me and other Ordinaries.

Here is a list compiled by AAA of new vehicles sold without a spare tire – even a mini spare. It is a long list. And it is going to increase as we approach 2016 – and the 34.1  MPG fuel economy bar. If you’re considering one of these cars, it might not be a bad idea to buy at least a mini spare (and possibly even a full-size “real” spare) from a salvage yard and toss it in the trunk, for just-in-case. Especially before a long-haul road trip. Like a fire extinguisher, you may never need it – but you’ll be ecstatically  happy to have one on hand if you ever do need it. Just be sure to get a spare (mini or otherwise) that has the correct bolt pattern and will properly fit your car. You can also buy a small bottle jack and lug wrench for about $30 at any auto parts store.

At least for now, it’s not illegal to add these things to a car that didn’t come with them from the factory, courtesy of our favorite pushy Uncle.