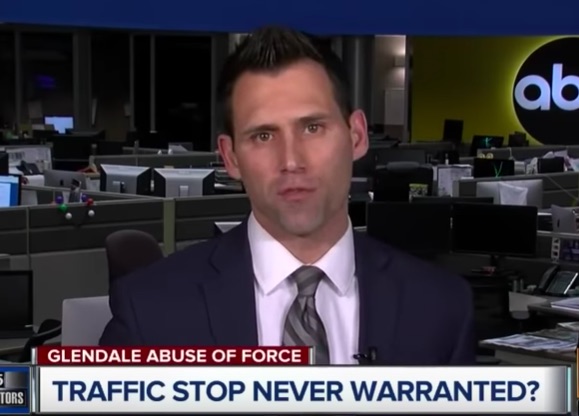 The local media in Glendale, AZ is doing a capital job reporting on the story of the AGW who brutalized the passenger in a car pulled over for an alleged minor traffic violation – failure to signal a turn. (Original story here.)

It turns out, the AGW may have made that up – the failure to signal – in order to have a pretext to brutalize the people in the stopped-for-no-legal-reason car.

ABC affiliate reporter Dave Biscobing has been dogged in his pursuit of the facts about AGW Matt Schneider – the sadist who ended up Tasering the passenger of the stopped car 11 times, including a shot in the balls, after the AGW pulled his pants down – after the man had been handcuffed and thrown violently to the ground . . . for the crime of questioning Schneider’s demand that he provide ID.

It turns out the pretext for the torture session was just that – a made-up “violation.” As Biscobing proves, there is no way the AGWs could have seen a failure to signal. The car enters the parking lot where the torture session occurred from a sidestreet on one side of the building; the SUV with the AGWs in it enters from the opposite side of the parking lot, from another street. It would have been physically impossible for the AGWs to have witnessed the other car signaling – or not.

The ABC reporter then  notes – with the help of an expert – that the AGWs approach the passenger side of the car first, which is odd if the reason for the stop was something the driver supposedly did.

So, the stop itself was based on a deliberate lie.

The Tasered man is about to become a very rich man – but not, unfortunately at the expense of the egregious AGW. The taxpayers of Glendale will be forced to pay for Schneider’s crimes.

This Schneider creature has been “causing problems for years” – and nothing (surprise) was done about him. 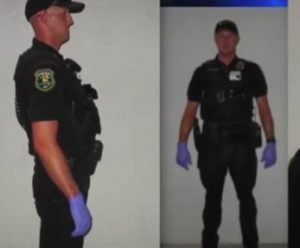 Biscobing found out that Schneider had been “disciplined repeatedly,” for abusive actions – and “suspended twice times” – one of those times for “intentionally destroying” a citizen’s personal property . . . but was never fired, much less charged with any criminal offense.

His boss actually praised Schneider for “thinking outside the box.”

The pattern of abuse goes back more than a decade.

Schneider was described by his fellow AGWs as “bullying” and “insubordinate.”

How did these upper echelon AGWs imagine this psychopath would treat the unarmed and legally helpless public?

After the video of the most recent horror got out, the ABC affiliate attempted to find out whether Schneider – who would have felt right at home at Treblinka – was still “patrolling” the streets of Glendale.

“We decline to answer questions concerning this matter,” was the indignant response of the AGW shop that unleashed him.

The FBI is reportedly investigating now – and not just Schneider.

If any good comes of this, it will be that the public demands that taxpayers no longer pay for the abuses committed by AGWs but that they be held personally liable, both criminally and civilly.

Just as any mere citizen would be.

Had any mere citizen just marched up to someone else, then Tasered them in the genitals, they would be sued into oblivion as well as facing hard time in a hard place. Why should Schneider, et al be held to a lesser standard?

It is inexcusable – intolerable – that AGWs are allowed to dodge personal responsibility for the crimes they commit. Which crimes are made all the more inexcusable because they are committed under color of law.

If AGWs are not held to at least the same standards as any other person would be, the results will inevitable be explosive.

No one in his right mind wants that.

Particularly not for the sake of someone such as Schneider, a thing in human form who ought to be placed safely in a cage somewhere, forever.

An Early Sunset For Camaro?