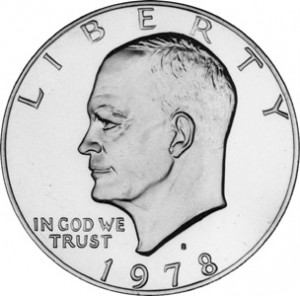 I don’t like Ike, I call into question the values of those who emboss his menacing visage on precious metal discs to be used as stores of value. If I say something’s worth a dollar, I mean it only in the traditional sense of a weight of a precious metal. The value of dollar should be the antithesis of the child terrorizing cold war balloon animals that were fashioned by this warmongering death clown.

As a mouthpiece of the Parasite Class, he was a one man shop of horrors who should be hated and villified for all time as a demon scaremonger that convinced millions of Mr and Mrs Cleavers to throw all their hard earned wealth into the flaming maw of the Moloch State as a sort of sacrifice against the allegedly lethal scribblings of Karl Marx.

Eisenhower’s farewell speech was a long-winded hysterical and calculated lie designed to inflame the peasants about a fascist monster tale called the “Cold War.”

He convinced Ward and June to hold as their highest value, their contribution to a military policy against Russia. Like Reagan, he played the part of a noble warrior cowboy soul captaining a grand metaphysical struggle that should take over our minds and souls, in shameful manner that puts our current generation of Clovers to shame.

Ike’s words were Wilsonian, even messianic. The job of U.S. military policy is to “foster progress in human achievement” and enhance “dignity and integrity” the world over. The Unicorn of Government is now an ever expanding herd of magic ponies we can ride to the ends of the earth. Saddle up patriots the war isn’t over. The UN Preamble is the new higher law of our land. “We the peoples of the United Nations are fighting everyone to bring four freedoms to every man at the point of our righteous rifles.”

An enemy stands in the way of achieving this dream, sayeth the U.N. Prophet Ike, and this enemy is “global in scope, atheistic in character, ruthless in purpose, and insidious in method.” This great struggle “commands our whole attention, absorbs our very beings.”

Ignore the stirring in your own loins for the life that lies ahead. Follow the crazed fantasies of the old dessicated loins of your councils of living fossils. Russians, Martians, and faraway countries are coming for your freedoms. The rich authoritarian states are at war with the poor authoritarian states. Forget what was said about them only a few years ago being our valiant ally in the struggle against Japan and Germany.

The prophet Dirty Harry Truman has shown me the sacred oracles. There is no peace. Demand that your congresscritters continue to send me your treasures. You are the United Colonies of America. There will be no postwar disarmament. You are a colonists of the greatest plantation ever to exist. I will keep increase the U.S. industrial dependence on government spending, especially the American corporations operating overseas.

There is a great tide of freedom throughout the lands enthralled to the Soviet Herd of Socialistic Unicorns. I will pretend this great wave of liberalization by Kruschev doesn’t exist. I will spread lies and fear of this greatly weaker “rival” of the endlessly unraveling and dwindling nonviable Soviet Parasite state.

We the Fascist Clovers of the United Colonial States will not only fail to encourage this liberalization, but instead, pretend it isn’t happening so as to build up a new permanent form of socialism at home.

I am the almighty Ike. I decree a neverending peacetime socialism. One that appeals to big business, and I will be its spokesman. The libertarians who support Cold War opponent Robert Taft for the Republican nomination in 1952 are commie pinkos, cowering beneath my bludgeons.

The Eisenhower Machine by brute force has usurped the party nomination. The great power establishments know that I will always put my backers and supporters first, and that this tradition will never die, because never will the authority of the Corrupted Clover United Colonies of America ever die.