Buick sells a lot of cars – but mostly (historically) to people who might be buying their last car. 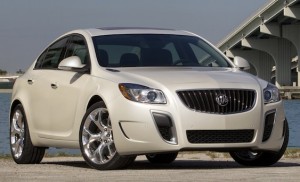 Buick seems to be turning away from the Metamucil Set with models like the new turbo Regal GS – which is the first Buick with real performance intent since at least the mid-1980s turbo Regal Grand Nationals. Interestingly, the new GS has about the same rated horsepower as the peak rated hp of the ’80s-era turbo Regals (the 276 hp ’87 Regal GNX). And unlike the ’80s-era GN, the 2012 Regal GS is even available with a manual transmission.

Wilfred Brimley won’t like it much – but if you’re someone who can remember when GS didn’t stand for Goes Slow, you probably will. 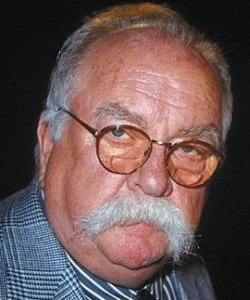 The Regal GS is the high-performance version of the Buick Regal mid-sized sedan. Unlike the ’80s-era rear-wheel-drive Regal GN, the new GS is FWD. But unlike the automatic-only ’80s-era GN, the ’12 GS comes standard with a six-speed manual transmission (a six-speed automatic is optional) plus 270 hp turbocharged engine, 19-inch performance wheel/tire package and upgraded Brembo brake package.

The GS package is a new addition to the Regal roster.

Exuberantly peaky, high-powered turbo four is fully capable of ripping a burnout through the six-speed manual transmission. And almost chirping the tires on the 1-2 upshift with the optional six-speed automatic.

Turbo can be heard as well as felt.

Slight turbo lag when you floor it from a standstill.

Needs to be a bit quicker to live up to the GS badge – and outperform comparably priced “status” sport sedans such as the BMW 328i. 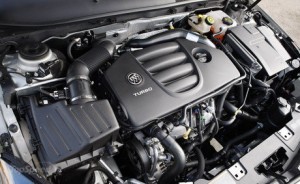 The GS gets an up-rated version of the 2.0 liter, turbocharged four that’s optional in regular Regals. It can be paired with either a six-speed manual transmission or (optionally) a six-speed automatic with a Sport/manual shift mode.

The GS engine features more total boost and a higher-capacity exhaust system – allowing the engine to produce 270 hp at 5,300 RPM vs. 220 at the same engine speed in the non-GS Regal turbo.

Both cars get there in about 6.2 seconds.

Why the disparity, given the Buick’s horsepower advantage? The Buick is beefy, that’s why. It weighs 3,710 lbs. at the curb vs. 3,406 lbs. for the BMW – a difference of some 300 pounds. If the two weighed the same, the Buick would be quicker – probably getting to 60 in six flat or maybe even in the high fives. It’s a shame that it doesn’t – and not just because more speed is always good. The problem for Buick is the BMW costs about the same. And the BMW is rear-wheel-drive, the preferred method of putting the power to the pavement – in a performance car.

On the other hand, the GS outperforms the FWD (and V-6 powered) and slightly more expensive Acura TL ($35,705), which takes about 6.5 seconds to get to 60 and which is not available with a manual transmission. Ditto the $31,300 FWD (and automatic-only) Volvo S60, which takes 7.2 seconds to do the deed.

It’s about dead even with the FWD version of the Audi A4 – and quicker than the AWD equipped A4.

Gas mileage is 19 city, 27 highway (with the automatic). Premium fuel is recommended to get the most out of the turbocharged engine – but it’s not required.

The turbo A4 requires premium. Ditto the turbocharged BMW 328i.

Buick performance cars (when Buick still built performance cars) were admired for combining muscle car rowdiness with luxury car plushness. An early ’70s GSX Stage I 455, for instance,  could run the quarter mile as quickly as a Chevelle SS 454 but was not the crude animal the Chevy was. The Buick ran high 12 second passes with the AC on. The Chevy didn’t even offer AC. An ’80s-era Regal GN turbo could smack down almost anything – including same-era Corvettes – but with much more finesse (and room for four adults, too). 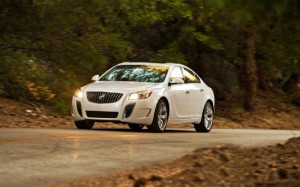 The ’12 GS is not unlike its forbears. Ordinarily, it is docile, quiet – even luxurious. Soft seats, lots of spreadin’ out room. Extremely quiet. This changes as you ease down on the gas pedal. Give it a quick stab and – after a slight pause – you’ll feel (and hear) the boost well up. Once on boost, the car pulls hard – right on the edge of breaking the front tires loose, if you launch it WOT from a standstill with the TC off. I was almost able to get a “chirp” on the 1-2 upshift through my test car’s six-speed automatic – my efforts thwarted only by the transmission’s civilized shift programming, not any shortage of power. With a little reprogramming, tire-chirping upshifts ought to be possible.

Amazingly – given the high-pressure boost and 270 hp – there’s slim to no torque steer, even if you power brake it (automatic versions). This makes the car very controllable, even when driven very aggressively.

The key thing to know about the turbo Buick is it’s not for everyone – in particular, when the little 2.0 engine is teamed up with the manual six-speed transmission.

Americans tend to like easygoing, low-RPM engines. The turbo 2.0 is neither. It takes a moment, after you put your right foot down, for the turbo to gather itself – to build up the boost – before the fireworks commence. Then it happens, suddenly. If the car is a stick, it’s up to you to keep the engine in its powerband – and on boost. 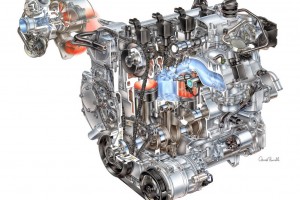 There is a sweet spot between about 3,000 and 5,500 RPM – though the engine will rev to 6,300. Keep it in the sweet spot and the Buick soars. But if you let the RPMs drop too much, the boost bleeds off – and the car will go momentarily limp.

Until you wick it up again.

Other reviewers have commented – and I agree – that the automatic is the easier to drive. But the manual is the more fun to drive – and not just because it’s fun to work the pedal, either. There is the satisfaction of keeping it in the right gear, of working with the power curve. I was able to test drive the six-speed version in the form of the last-of-the-line Saab 9-3 turbo, which has the same drivetrain as the GS. That car was a blast to work – and so is this one.

My test Regal had the optional six-speed automatic. It has the virtue of launching more consistently, and of working brilliantly with the peaky turbo four. But if you like to drive more than the experience of being driven, try out the six-speed. If you’re like me – and not like Wilfred Brimley – you’ll like it. 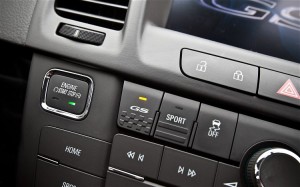 Another feature of the GS you’ll like is the Interactive Drive Control system – with the GS having its own unique max-effort performance setting vs. the regular Regal’s Tour and Sport settings. In the GS, Tour is deleted in favor of Sport and GS.

Push the checkered flag “GS” button on the upper console and the suspension cinches tight, the dashboard backlighting changes – and you’re ready to rock. FWD may not be the ideal set-up for a high-performance car, but the GS almost never feels FWD – that is, nose heavy and prone to early-onset understeer. It’s very neutral up to very high speeds – speeds higher than legal and then some. For street driving, arguably, a well-sorted FWD performance car is a better choice for most people than a RWD performance car, for two reasons: In the hands of nine out of 10 drivers, the handling advantage at the limit of the RWD layout is purely theoretical because most drivers don’t drive fast enough for it to become a factor. And second, RWD is a handling disadvantage in the hands of nine out of ten drivers at high speeds – and at high speeds in poor weather – because it’s much less forgiving than FWD when those nine out of ten drivers make a mistake, or push things too far.

The only concern I’d have about the Regal’s FWD layout is how the transaxle and CV joints hold up over time to the stress of dealing with 270 turbocharged hp. But as far as handling dynamics/performance feel, it’s a non-issue.

The standard Brembo brakes are excellent, too – feel and (lack of) fade-wise. The car can stop from 60 MPH in less than 108 feet, which is top-drawer. Notice, too, that they are not extra cost.  (More on this below). 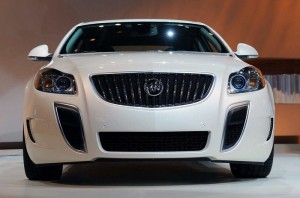 Buick is evolving gradually, not suddenly. The Regal GS isn’t a radical departure from the overall look of previous/recent Buicks (as distinct from the parking brake 180 Cadillac did). It’s still recognizably part of the family – but no longer the Grandpa of the family.

The tauter, crisper character lines – and almost angry-looking blue LED surround projector beam headlights – blend well with the still recognizably Buick softer shapes. This car ought to appeal to the demographic Buick is courting – that is, people not in Wilfred Brimley’s demographic. I’m in my 40s, in the income range Buick says this car is targeted at – and I liked it. I’m just old enough to appreciate a bit more space to stretch my legs and arms, a bit more give in the seat – but young enough to still enjoy a good time behind the wheel.

Which, by the way, is a meaty, leather-wrapped “flat-spotted” one – similar to what you’d find in something like a VW GTI. It has a substantial, tactile feel ideal for hands not yet palsied by arthritis. The rest of the interior is quality-looking, too – with a number of neat little detail touches such as the little red LED pointer that tracks with the speedo and tachometer needles as they sweep across the gauge faces. 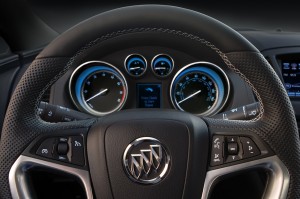 Headroom up front is a bit less than some others in this general class (including the BMW 3) but there are no clearance issues for people as tall as 6 ft 3 (me). In the back, however, occupants my height may find they have to tuck themselves down a little to avoid bumping up against the headliner. The G’s 36.8 inches of rearseat headroom is definitely a little on the crimpy side.

The only real problem with this car is the price – relative to the power/performance and what’s available for about the same money at a BMW (or Audi or Infiniti) store. Buick is a top-of-the-line brand in China, but here in the U.S., it’s still looked upon as entry-luxury. Thus, its price point is probably a bit too close for comfort to would-be competitors such as the BMW 3 Series and the Audi A4.

Buick can fix this easily, though, by notching up the turbo Regal’s power to 300 or so – enough to decisively outgun the comparably priced BMW 328i and and Audi A4. 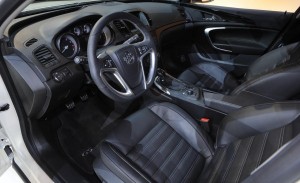 But, there is an important point to make here in the Buick’s defense. While it’s true that the BMW 3 and Audi A4 have base prices in the same basic ballpark as the Buick, that’s deceptive because of the way adding even a few options to a car like the BMW can easily push its MSRP to $40,000 or more. A comparably performing Volvo S60 T6 starts at $38,450.

On the other hand, my test car GS topped out at $35,600 loaded to the doorsills with all the regular Regal’s options standard – including a high-end, nine-speaker Harmon Kardon surround-sound stereo, full leather, heated seats, keyless ignition – plus the optional 20-inch performance wheel/tire package, navigation and a sunroof. 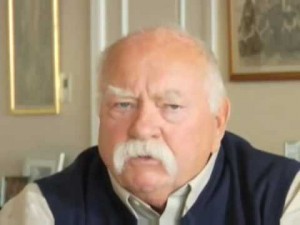