On August 16th former US Marine Brandon Raub was arrested for posting his opinion about the US government on his Facebook page . Raub is currently being held in a psychiatric ward. In a statement by Raub, he explains : “I’m currently in John Randolph in the psychiatric ward being held against my will. They were concerned about me calling for the arrest of government officials.”

Raub’s lawyers say that he will be held for “up to 30 days’ further confinement in a VA psych ward” after “government officials again pointed to Raub’s Facebook posts as the sole reason for their concern and for his continued incarceration.”

While Raub was taken forcefully, put into handcuffs and taken by the FBI to be questioned, both the FBI and Secret Service deny that Raub was arrested or detained by them. 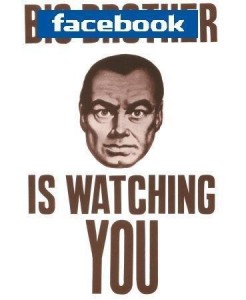 Facebook comments were recently cited as evidence in a court case concerning cyber bullying where comments on a personal page were ruled by a US Federal court as information that can be lawfully obtained by the police to be used against a defendant.

William Pauley, US District Court Judge, stated that because the defendant made violent threats in his posts which are deemed public information that they are allowable as evidence against him by prosecutors.

On April 24th, District Judge Raymond Jackson ruled that by clicking a “like” button on Facebook, that this affiliation is public domain and not protected by the 1st Amendment. Jackson wrote : “Simply liking a Facebook page is insufficient. It is not the kind of substantive statement that has previously warranted constitutional protection,” and continues to say that, “Facebook posts can be a matter of public concern; however the Court does not believe Plaintiffs Carter and McCoy have alleged sufficient speech to garner First Amendment protection.”

The Electric Frontier Foundation (EFF) filed suit with the US Department of Defense (DoD) because the federal agency refused to admit their relationship with social networks with regard to surveillance and law enforcement investigations.

Government officials scan Facebook, Linkedin, Twitter and YouTube for evidence of criminal activities, activists and possible suspects who may have not committed a crime just yet. And these agencies named in the lawsuit refused to cooperate with the EFF in explaining how gathering this information would impact “citizen’s privacy rights and associated legal protections.”

Hoping to dupe Americans into posting on their Facebook page, the CIA gathers information while inviting people to register and read information about the “employment opportunities.”

While government agencies are using Facebook to data mine on Americans, it has been suggested in the social meme that without a Facebook page, a person’s mental stability is questionable.

Now, having a profile or not is the barometer of whether or not a person is “suspicious” or not. Some psychologists are even suggesting that not having a Facebook profile means that you are a psychopath. The link between the Batman shooter and the Norwegian mass murderer was their lack of Facebook profiles. In fact, this may “be the first sign that you are a mass murderer.”

Trapwire , the most impressive pre-crime surveillance software corporation with clients from Wal-Mart to the White House, is but one of many types of Big Brother network grids that have incrementally begun to invade our lives.

Alexander Keith, director of the National Security Agency (NSA) described at a yearly Def Con computer hacking conference that the internet is “at great risk from exploitation, disruption and destruction.” He went on to voice his “concern that it’s going to flow into destructive attacks that could have consequences for our critical national infrastructure and the Internet itself.”

Basically, Keith is concerned because the internet is currently not controlled by federal agencies. When the NSA needs more hackers , they recruit out of colleges and universities across the US under the official Centers of Academic Excellence in Cyber Operations. By using college students, the NSA is amassing an “elite team of computer geniuses” that will be trained in all methodology of hacking based on their exceptional cyber intelligence, military capabilities and ability to enhance law enforcement’s expansion of spying on Americans.

The Department of Justice (DoJ) has requested the authority to criminally prosecute those who lie on Facebook and other social media as a violation of the Computer Fraud and Abuse Act. According to Richard Downing, the DoJ deputy computer crime chief, the law must provide for “prosecutions based upon a violation of terms of service or similar contractual agreement with an employer or provider.”

A felony can be committed by the user of a social media site by exceeding the authorized access; meaning any infraction of the website’s term of service. Put in other words , “If a person assumes a fictitious identity at a party, there is no federal crime. Yet if they assume that same identity on a social network that prohibits pseudonyms, there may again be a CFAA violation. This is a gross misuse of the law.”

The NSA has transformed itself into the largest and most comprehensive intelligence agency with the expressed purpose of collecting data on American citizens. Emails, cell phone calls, text messages, Google searches, parking receipts, and all other forms of information are collected and stored for future use. Social media sites like Facebook readily give over information to federal agencies that conduct such surveillance.

And like we have seen with the case of US Marine veteran Brandon Raub, it can be used against you.