Lincoln’s been on the mat for a couple of long counts now. Uppercuts to its status as a premium brand. Body blows to its curb appeal. The wounded champ sways and totters – his eyes blinded by blood, sweat. 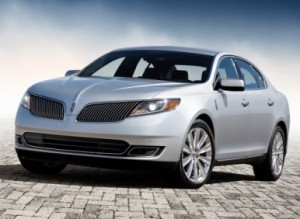 Will Lincoln be able to get back on its feet before the ref calls it?

Ford is certainly trying hard to revive its beleaguered luxury brand. The 2013 MKS, for example, isn’t a bad car – and in a number of important ways, is actually a pretty good car. For instance, it’s available with a 365 hp twin-turbo V-6 and AWD for just under $50k. The same money will buy you – just barely – an entry-level BMW 5 with a four cylinder engine and just 240 hp.

A 300 hp V-6, adaptive suspension, 19 inch wheels, heated and cooled seats, mobile WiFi and a 10 speaker premium audio rig are standard equipment in the base model MKS – which at just over $42k to start is a already loaded with features that are often expensive options in BMWs.

And Cadillacs and Audis, too.

But despite these and other appealing attributes, the MKS has a possibly insurmountable problem: Its Taurus roots are still showing. It’s a problem for Lincoln’s entire product portfolio, too – and not just the MKS. Because all current Lincoln models are based on current Ford models. Shared platforms – and shared drivetrains. They’re not bad platforms – or engines. In fact, most are very good. The problem is they’re Ford platforms and engines – not unique to Lincoln. The BMW 5 driver doesn’t have to worry that the guy in the next lane over is driving the same basic car under a bread-and-butter label – and paid 40 percent less for it. 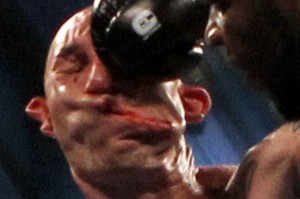 The MKS driver, on the other hand, will have to endure the inevitable Taurus Talk – and comparisons.

This, of course, is mainly a problem for Lincoln – in terms of its ability to remain a serious contender in the luxury car arena. For buyers – today, right now –  the issue is simply: Should I be looking at this car?

Let’s take a look and see.

The MKS is Lincoln’s top-of-the-line sedan.

Prices start at $42,810 for the base model with FWD and 3.7 liter V-6 engine. AWD can be ordered as an option, raising the MSRP to $44,805. The ultimate version of the MKS features AWD and a twin-turbo’d 3.5 liter engine – the same engine used in the high performance Taurus SHO. This version of the MKS lists for $49,800.

Though it is Lincoln’s top model, the MKS competes more directly with the mid-tier models sold by BMW, Cadillac, Audi and other luxury car makers. In part, this is due to the fact that the MKS is not a full-sized car – unusual for a top-of-the-line luxury car. (Lincoln hasn’t had a full-size car in its lineup since it retired the Town Car in 2011.)  Rather, it is a mid-sized car – and so competes with other mid-sized cars, like the mid-sized BMW 5 and, Audi A6 and Caddy CTS. Those cars, of course, are also mid-priced cars for their respective manufacturers.

Lincoln’s apparent strategy with the MKS is to offer more car – literally – than the typical (compact-sized) entry-luxury car (such as a BMW 3, or Caddy ATS, or Audi A4) while offering more stuff – at better price – than the mid-sized stuff typically does. 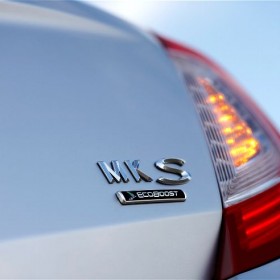 Both MKS engines get a hp infusion. The base car’s 3.7 liter V-6 (sourced from the Mustang) is up to 300 hp now – from 273 previously.  The optional “EcoBoost” twin-turbo V-6 is up to 365 hp – vs. 355 previously. The fuel economy of both engines is improved, too. This plus exterior and interior styling tweaks constitute the major changes for the new model year.

More of a luxury car than a luxury-sport car.

A deal, given what you get – and what you pay to get it.

Ecoboost versions are not cush.

And arguably not quick enough to make up for it. 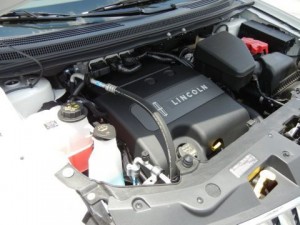 Which explains why these cars (also the four cylinder powered BMW 5, which weighs about 390 lbs. less than the MKS) are as quick or even quicker, despite having smaller engines – and less hp. The 3.7 equipped MKS takes about 7-7.2 seconds to get to 60. In the MKS’ defense, this is right there with the four-cylinder A4 (7.5 seconds) and base model CTS with 3.0 V-6 (also in the low sevens). But the MKS coulda – and shoulda– been quicker than it is.  And would have been – if it didn’t weigh as much as it does.

Gas mileage with FWD is 18 city, 27 highway (18/26 with the optional AWD). This, too, is good – but could have been – and should have been – better. The MKS is a fatty. Its performance – and efficiency – is hurt by having to drag around the equivalent of a cast iron engine block in its trunk.

Of course, even more hp can hide the presence of excess weight. Enter the optional 3.5 liter “Ecoboost” V-6. With 365 on tap, it gets the MKS to 60 in under six seconds. Unfortunately for Lincoln, the optional-engined versions of cars like the A6 (with supercharged 3.0 V-6) are quicker still (5.2 seconds) because they’re so much… lighter than the MKS. 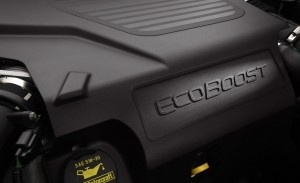 Gas mileage with the Ecoboost engine is 17 city, 25 highway – not unreasonable given the power. But it could be – should be – better than that. It’s not just a weight problem, either. The MKS – with either engine – comes with a six-speed automatic. The A6 3.0 has an eight-speed automatic. Ditto the BMW 5 (all versions).

This is one area where the MKS’ age is showing. Though updated, the current (2013) MKS dates back to 2008. Five years ago, a six-speed automatic was top-drawer. Today, it’s merely par. The eight speed boxes in models like the A4 and BMW 5 offer more advantageous – more efficient – gearing.  It’s one of the major reasons why the 528i can deliver 34 MPG on the highway – as good as a  new Toyota Corolla –  and almost 10 MPG better than the EcoBoosted MKZ 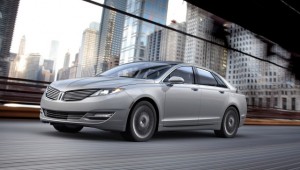 There are two distinct MKS personalities. Models with the 3.7 engine (FWD and AWD) are soft riders, quiet and cush. This version of the MKS will appeal to people who like luxury cars – and luxury-sport cars not so much. The market has shifted almost completely to the luxury-sport side of the aisle: Rear-wheel-drive based platforms, fairly aggressive suspension tuning. Which is fine, if you drive sporty. Some (let’s face it, most) people don’t. Even so, most people under 60 like to think they do – and so want a car with that reputation – and that capability – even if they don’t necessarily make much use of it. The MKS is not like that. It’s a cruiser – not a bruiser. The problem – for Lincoln – is that while this appeals to the 60-plus set – the traditional Lincoln buyer, in other words –  it’s a liability when it comes to drawing in the under-50s who are the (hopefully) future buyers of Lincolns. People who will still be buying cars ten years from now – instead of watching Wheel of Fortune at the old folks’ home ten years from now.

The Ecoboosted MKS will appeal to the not-yet-AARP set. Anyone who appreciates the Taurus SHO will appreciate the MKS SHO (even if they don’t actually call it that). Because that’s exactly what it is. Same drivetrain as the Taurus SHO – same ultra-aggressive 20 inch wheels and “summer” tires, too. 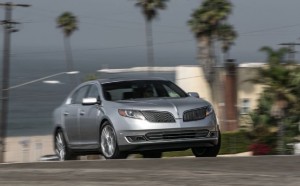 Here’s the rub, though:  It’s not nearly quick enough (or sharp enough in the corners) to make you forget about the all-too-rough ride. A BMW M also has that five o’clock shadow – but a BMW M (5 or 3) can toy with an MKS SHO. Destroy it in a straight line performance contest; embarrass it on a road course. So, people put up with the hard-core nature of the thing.  The MKS SHO is only a few tenths quicker to 60 than the standard-issue BMW 528i – but it’s a lot less everyday friendly than the BMW (and also not as fun to drive hard, frankly).

Is Lincoln a performance car band? Or a luxury car brand?

These things still need some sorting out. 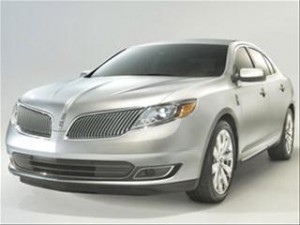 The updated front clip is – to my eye – a little weird (and busy) looking: sieve-like grille, triple pleats on the hood. It’s different, to be sure. But so was the Edsel. I’m not sure what to make of it. The ass is a little droopy, too. The side view is the best view – but it’s a derivative view. Same generic shape  – including the now universally ripped-off BMW rear quarter glass backswoosh. Lincoln still hasn’t fully fleshed out its new “look.” What is has done is  incorporate some traditional Lincoln styling cues onto a pre-existing Ford shape. But the Taurus underneath is still visible. And I think that’s a problem.

The inside is slick – though again, the shared DNA is shows. The main gauge cluster, for example – it’s virtually identical – right down to the centrally placed speedometer. Sure, the MKS gets a leather toupee on top of the dash – and some nicer quality trim plates. But there is a lot of commonality – and too much of it is too obvious. This isn’t meanness on my part. It’s a warning. Lincoln needs to realize that the guy who spent $50k on his new MKS is not going to be a happy camper when he flies someplace on business  and discovers that his rental car Taurus is very much like his $50k MKS. This does not happen to the BMW (or Audi or Caddy) owner. Because it cannot happen. Because there is no lower-tier version of their cars. 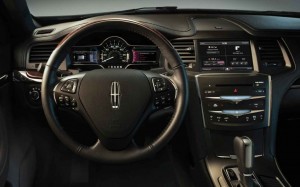 To be fair to Ford (er, Lincoln) the MKS does come with more than its fair share of amenities – including items not available in the Taurus (and which often cost extra in BMWs, Audis and so on – if they’re available at all. )

For instance, the futuristic MyLincoln touch screen interface. It replaces mechanical control knobs and buttons with finger-slide (and touch) on three LCD screens. It’s pretty neat – and pretty unusual, too. The main downside is you’ll need a few days to get familiar with how it all works.

The MKS also offers an automated parallel parking system, lane departure warning system, heated steering wheel (and rear seats), and a 16 speaker surround sound audio rig. You can buy the works and still be under $50k – which is a deal when viewed from almost any angle except status/curb appeal.  No matter how much stuff the MKS has – and no matter how sweet the price may be – it’s still got that problem. 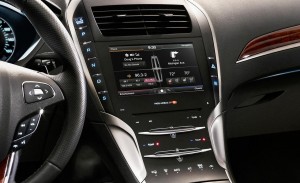 Another problem I found with the car was functional: There’s surprisingly limited rear seat head and leg room. Those over six feet will find not much space to spare between the top of their head and the roof’s padding, especially toward the sides – and especially if the car has the optionally available sunroof. Taller occupants’ knees may brush up against the front seatbacks, too. 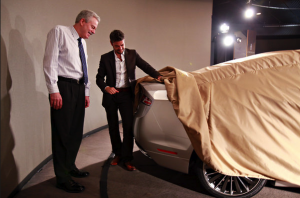 It’ll be interesting to see what happens – not just to the MKS but to Lincoln.  Perhaps the smart move is to give up on top-tier status and become a major player in the almost-luxury segment. It might be more fruitful to go after Buick rather than BMW. But I dunno. Buick may be selling well – in China. But here, it’s still regarded as mostly an old fogey brand. And there’s not much future in old fogeys.

The MKS had a closer peer in the form of the Acura RL which was also mid-sized, mid-priced and based on a FWD layout. But Acura seems to be moving closer to the BMW-Audi-Caddy nexus (the RL’s repalcement, the 2014 RLX, looks to be a much more aggressive car than the RL). 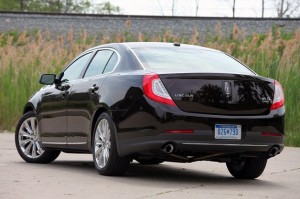 Lincoln could be left in the proverbial lurch. Too close to Ford. Too far from BMW, et al.