I know cars – and how to fix cars (sometimes)…  but my wife doesn’t. 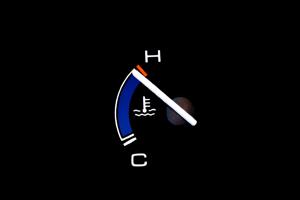 Probably a lot of families are “mixed” like this. It does my wife no good to know I know how to fix This or That (or at least, where to start looking) if I happen not to be with her when the car stops running. Hence this quick run-through. I wrote it mainly for her – but figured it might be helpful to people out there, too:

First, always pay attention to the temperature gauge (most new/recent model cars have gauges rather than lights). This way, you’ll notice the engine is running hot before it actually overheats. Make a mental note of the normal reading for your vehicle when it’s fully warmed up, after about 15 minutes of driving. Then be on the lookout for abnormal readings. If the needle seems to be edging closer and closer to “H” (or the red area), the time to take action is right now – before the needle actually gets to “H” or into the red zone.

Reduce your speed (eases the load on the engine) and immediately turn off the AC (same reason) and turn on the heater  – which is actually a mini-radiator. By turning on the heater (fan on high) you will help the engine dissipate excess heat. If the needle begins to stabilize – or goes down – you may not need to pull over right way, but you should reduce speed and start looking for a safe place to stop. Because  overheating is not normal; there is some underlying problem – low coolant, for example – that caused the high temperature reading. You need to find out what it is before resuming normal travel. 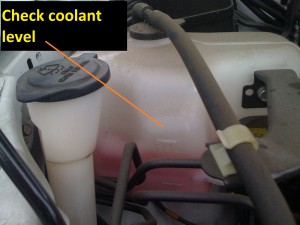 When you find a safe place – ideally a place such as a service station, where supplies and help will be available – pull over and stop the engine. You can raise the hood and check the coolant recovery tank – usually, a whitish-looking plastic tank off to one side of the radiator and clearly marked – to see whether the level is low. But do not attempt to open the radiator cap until the engine has cooled down (at least 15-30 minutes) and only if you’ve had someone who knows how show you how beforehand.  It is imperative to put a heavy rag over the cap before you begin to twist it loose – applying downward pressure as you turn, and turning it out only just enough to safely release any pent-up steam and pressure. If you haven’t done this before, find someone who has – and let them do it for you. You can be severely burned by hot – and pressurized – coolant/steam blowing out of the radiator.

If the coolant level is low, that’s the likely reason for the overheating. But now you need to find out the reason for the leak. The usual culprits are: The radiator itself, one of the hoses that brings coolant to (and from) the radiator, a leaking heater core (more on this in a moment) or, a dying water pump. Look for drizzling greenish fluid (sometimes orange-red in newer cars with “long life” coolant) and signs of wetness around the radiator and hoses. If you find them, probably, you have found your problem.

Hoses can be (usually) easily and fairly cheaply replaced with basic hand tools, right by the side of the road. A mechanic is not necessary – just someone who is handy and knows a little about cars. In an emergency – and if the leak is fairly minor – a hose can sometimes be temporarily patched with duct tape or electrical tape.

Radiators typically get replaced rather than fixed nowadays – because they tend to be made of plastic and so are throwaways. Removal and installation will probably require a mechanic – or at least, a pretty competent handyman type. 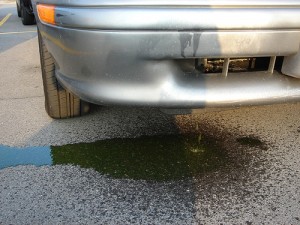 Dying water pumps – this is the part that circulates the coolant through the system, much like a human heart circulates blood through our bodies – often have what are called weep holes, which do as it sounds: They weep coolant, which you should be able to see. The water pump is typically mounted on the front of the engine, so look for dripping coolant in that area. If it’s leaking, it is probably dying – and must be replaced. This can be a complicated job that will require the skills (and tools) of a mechanic.

And the heater core?

The good news is that unlike all the foregoing issues – which must be fixed before you can continue driving – you (or a mechanic) can disconnect the leaking heater core from the rest of the car’s cooling system by cutting and splicing the two coolant hoses that take coolant to – and back from – the heater core. Doing this will not cause any harm to the engine and you could drive for years without problems, if you wanted to. The bad news is you’ll be driving without heat. The even worse news is that replacing a heater core is among the most difficult – and expensive – repairs you may ever have to deal with. How come? Because the heater core is one of the first components installed in the car as the bare chassis moves down the assembly line. Once all the other stuff is installed, getting at the core can be extremely challenging. 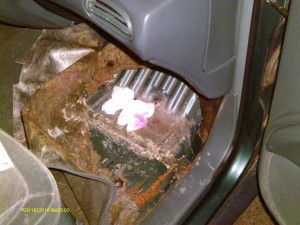 How to know if you’ve got a leaking heater core?  If you’re losing coolant – and finding it inside the car (passenger side floorboard/wet carpet) you’ll know it. Luckily, heater core failures are relatively rare – unless the car is pretty old (well into its teen years, typically).

Ok, so what if the temperature needle suddenly moves to “H” and doing the stuff mentioned above (slowing down, turning on the heater) doesn’t lower the temperature reading? In that case, you need to pull off the road as soon as you safely can do so. It’s likely the drive belt(s) have snapped – which means the coolant isn’t being circulated by the water pump – or you’ve suddenly lost a lot of coolant. In which case, there should be obvious signs, such as steam pouring out from under the hood. Or – much worse – out of the exhaust pipe, which is strongly suggestive of a major engine problem such as a failed head gasket (coolant is being sucked into the engine and burned up). 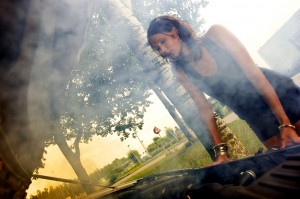 If you don’t see steam billowing out (or obvious signs of lost coolant) you might try putting the transmission in neutral and raising the RPMs to about 2,500. If you haven’t lost a drive belt – or coolant – and there isn’t some major problem with the engine –  this should bring down the temp needle. But if you don’t see downward movement within a very short time – like a minute or so – your best bet is to shut off the engine and call for help.

Additional stuff: If you find yourself low on coolant be certain that whatever coolant you (or someone else) adds is the right coolant for your particular car. Gone are the days when coolant was just coolant. There are several different kinds in use now – such as the orange-red “long life” stuff mentioned previously – and it’s imperative to use the kind called for in your owner’s manual. There should also be a sticker on or near the radiator/coolant recovery tank. Using the wrong type of coolant can lead to even more problems than mere overheating – and may void your warranty coverage.

Simple stuff: Overheating can also be caused by fairly minor/easily fixable problems such as a defective radiator cap or a stuck thermostat. If you see no leaks and there are no signs of coolant loss – and the engine seems to be otherwise running ok – these are two of the first items to check (or have checked) and cross off your list before moving on to more involved (and expensive) things.

All Fired Up About Tesla