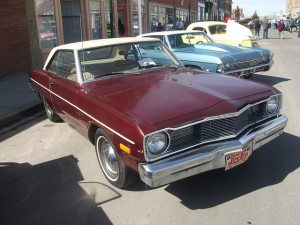 That year, Dodge offered a high-mileage version of the Dart called the Dart Lite (the Plymouth Duster version was called Feather Duster). To be precise, it was an option package that included a specially tuned version of the famous “slant six” 225 cubic inch engine, teamed up with an overdriven four-speed manual and a mileage-minded 2.94:1 rear axle ratio (vs. the standard car’s 3.21:1 ratio). Also included were lightweight body parts such as an aluminum hood and trunk lid bracing – which cut about 200 pounds of deadweight off the already-lightweight car. The result was 36 MPG on the highway.

Now for some context:

The new Dodge Dart – a much smaller car, equipped with a much smaller four-cylinder engine – gets exactly the same 36 MPG on the highway as the ’76 Dart Lite/Feather Duster. This is startling, given the new Dart has the benefit of almost four decades of engineering advances – including such things as a six-speed manual transmission, direct port fuel injection and vastly better aerodynamics. Yet the 2013 car only manages to match the mileage of the 1976 car – a much larger car, with a much larger engine fed by a carburetor and without even an Atari-level computer running the show. 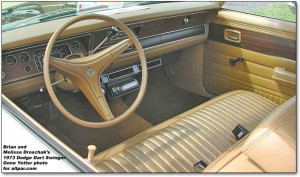 This is seriously sad. Tragic, even. It’s also a measure of how much progress hasn’t been made since the mid-1970s as regards vehicle design. Or rather, a measure of how much progress in engineering and design has been obviated, negated or otherwise rendered “net zero gain” (or loss) by government diktats. Everything from weight-adding “safety” diktats to thou-must-burn-corn-alcohol-laced fuel diktats (which have reduced the fuel efficiency of new cars by 3-4 MPG, on average, relative to what they’d otherwise achieve if they were fed 100 percent gas).

The old Dart – a mid-sized car by modern standards – weighed about 2,700 lbs. 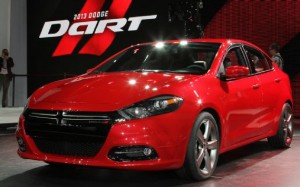 Now, to be fair, the new Dart has amenities (including touch-screen electronics and a really top-drawer audio system) the ’76 Dart never even thought about. Climate control AC – vs. wing-vent windows. Four-wheel-disc brakes, with power-assist – vs. four wheel drum brakes, without.

The new Dart will also probably run reliably for longer, simply by dint of the much-improved manufacturing techniques and quality control that are now industry standard. That means eventually, you’ll probably make up the $2,441 extra you had to pay (relative to the ’76) in longer useful service life. You might get 15 years out of a new Dart – while a ’76 would probably have discorporated due to rust long before then. And the new model has the legs (courtesy of its more favorable gearing and vastly superior aerodynamics) to cruise comfortably at 90 – vs. feeling-like-you’re already-pushing-it at 75.

Still, the fact remains: We’ve taken two steps back for every three forward – and perhaps not even that. When considered in the context of the 1976 Dart, the 2013 Dart’s fuel efficiency seems pretty weak. 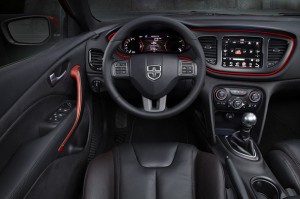 Because it is pretty weak.

Because the new car is pretty heavy. Absurdly heavy for a compact.

How absurd could be proved by finding an original ’76 Dart – and upgrading it with just a few basic pieces of relatively modern technology. I am not taking 2013 technology. I am talking 1985 technology.   A throttle-body fuel injection system, for example. That’s technology in common currency since ‘Ole Flatop was in the Oval Office. Plus a five-speed transmission.

And feed it real gas – no ethanol, please.

Makes you feel all good inside, doesn’t it?