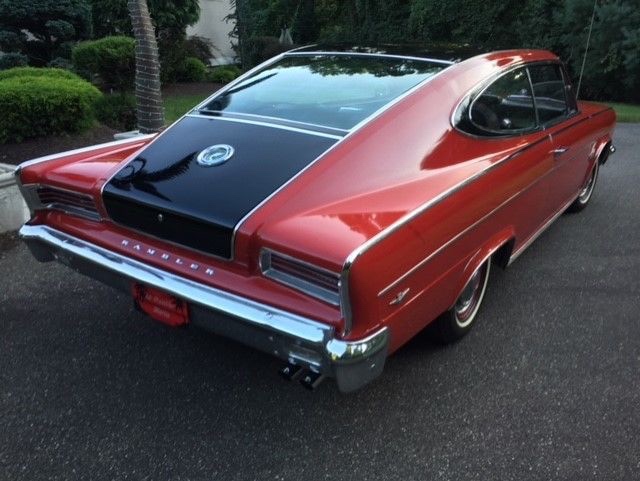 Pontiac’s GTO, which appeared in 1964, had every other American automaker rushing to cash in on the emerging youth market for big-biceped intermediate muscle coupes— including AMC. 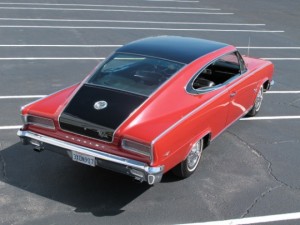 AMC, however, decided on a unique twist. Instead of me-tooing the Big Three’s muscle cars, it went with the personal luxury coupe concept – anticipating cars like the upscale Pontiac Grand Prix SJ by several years.

The result was the ’65 Marlin.

It was a hulking but well-proportioned fastback coupe – the first intermediate fastback on the market, too.

Initially based on the Rambler Classic, it shared that model’s 112-inch wheelbase. As with other AMCs of the era, the Marlin’s dramatic shape was penned by head stylist Richard A. Teague. Engines choices that first year were confined to an economical 232 cube, 145-hp straight six, or – optionally – one of two available AMC-built V-8s. The first choice was a 287 cube small block offering 198 hp.

Compared with the GTO and other large muscle coupes of the time – many of which offered engines closer to 400 cubes and as much as 350 hp or more – the Marlin may have seemed somewhat lacking under the hood. However, early models were comparatively light – about 3,050 pounds for the ’66 model – so performance was very good. With the four-speed manual and V-8, a Marlin was good for 0–60 in about 8 seconds or so. In 1965, that was a very respectable clocking.

Attention was paid to handling, too.

Even base six-cylinder versions were equipped from the factory with a front anti-roll bar. Front disc brakes were standard, too. Many cars of the time – including V-8 muscle cars – still came standard with four-wheel drum brakes. Buyers could order a 4-speed manual gearbox, mag wheels, a sporty center console that ran the length of the interior, full gauges with tachometer and low-back bucket seats.

Two-tone paint schemes were another Marlin hallmark – with the fastback’s center section, roof, and side trim often painted a contrasting color, such as black over white. 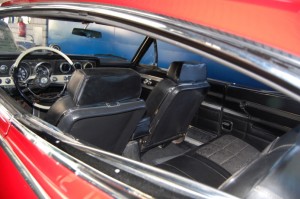 Two show cars – the Black Marlin and Marlin Tahiti – were particularly striking. The Black Marlin was painted glossy black with color-complemented interior while the Tahiti was sprayed with a dazzling metal-flake blue, with South Seas Floral interior motif.

When the ’67 model year rolled around, the Marlin had grown considerably. It now rode on a 118-inch modified version of the full-size Ambassador sedan’s platform – and fielded suitably larger, more powerful 290 and 343 cube V-8s. The latter produced up to 280 when ordered with 4-barrel carburetor and dual exhausts. Still not quite a match for Pontiac’s new 400 V-8 (also introduced that year as the successor to the previous 389) let alone the mighty 396 big block available in the Chevy Chevelle – but, nonetheless, respectable.

The thing to keep in mind is that the Marlin had been conceived as a personalized luxury cruiser, not another muscle car. No GTO or Chevelle or 442 ever offered individually reclining rear bucket seats with a fold-away center console. The Marlin also came with an adjustable steering wheel – and most were loaded up with comfort options like air conditioning, Solex-tinted glass, and power windows. 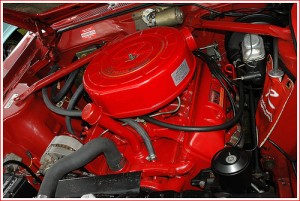 Unfortunately for AMC, the emerging youth market craved cubic inches uber alles and the Marlin just didn’t have the scoot to compete with similar offerings from GM, Ford, and Chrysler.

In 1968, it was retired and replaced by the smaller (and ultimately more successful) Javelin.

The Marlin’s brief model run – just three years, from ’65–’67 – and low total production (fewer than 18,000 were built, total) means these are among the rarest – as well as among the most interesting – of AMC collectibles.

Models equipped with the our-speed manual transmission and bigger V-8s are especially desirable.

* The Marlin’s back seat was specifically designed to accommodate 6-foot-4-inch AMC chief Roy Abernethy, who took a personal interest in the development of the car.

* AMC’s unusual Twin Stick Overdrive was available in the Marlin but very few were so ordered – less than 6 percent of total production, according to AMC records.

* A Vibra Tone radio was optional that was designed to produce stereo-like sound (FM stereo radio broadcasting was not yet widespread).