Here’s a bit of good news about new cars, for a change: Some routine maintenance tasks are easier to do – or don’t need to be done as often.

Sometimes, they don’t need to be done at all.

For example, most new cars don’t require periodic adjustment of their fuel injection systems  – which will usually operate without a hitch for years before needing to be cleaned out or a component fails and requires replacement.

Scheduled tune-ups are also much farther apart – often just once every 100,000 miles – and fewer parts are involved. Many new car engines don’t have a distributor cap or spark plug wires – which like points and condensers used to require periodic replacement. One less thing to worry about. Several less things, actually.

Tires also tend to last much longer now – 40,000 miles or more – if you don’t drive like a Nextel Cup driver.

Mufflers rust out and fall off much less often. Most new car will go their entire lives with the same exhaust pipes they left the factory with. Etc. 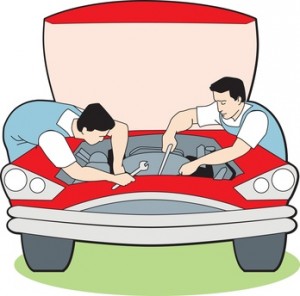 You save hassle, time and money – making up (at least somewhat) for the higher buy-in cost of new cars.

Here are some others, in the category of easier – and less often:

If you’re old enough to remember cars built before the 1990s, you may remember car engines that had a single belt for each accessory – power steering, AC, alternator – and how each one had to be individually tensioned by prying on a bracket while tightening an adjuster bolt. It was a pain – multiplied by the number of belts your particular car had.

Most new car engines, in contrast, have a single “serpentine” belt that drives all the accessories. And instead of having to set the tension via a tedious process of leveraging a bracket while tightening a bolt, then checking to make sure it’s right – now all you need to do is slip the belt around the pulleys, then over the idler/tensioner pulley – and release. The tension is set automatically – and you’re done. Some cars have screw-in adjusters, which are slightly more bother – but infinitely less so than leveraging old-style brackets one-at-a-time.

Even if you don’t do this job yourself, you won’t have to pay someone to do it often. Serpentine belts are much longer-lived than the old-style single belts – usually lasting 50,000-plus miles or more before they ought to be replaced – and failing before then far less often.

Most new cars – even economy cars – now come with four-wheel-disc brakes. In the past, many cars – and most economy cars – came with drum brakes on the rear wheels – and sometimes, all four.

Drum brakes have some advantages – they’re cheap and tough – but several disadvantages, including more labor-intensive service. Replacing drum brake shoes is a dirty, un-fun job. Replacing disc brake pads is less dirty and usually, much easier. For one thing, the fine adjustments one must perform to properly adjust new brake shoes relative to the brake drum aren’t necessary when fitting new disc brake pads. The main chore is seating the caliper piston so that you can install the new pads – and then re-installing the caliper on the brake disc. But this is a straightforward job compared with turning that hard-to-see/hard-to-get-at star wheel on a brake drum while manually feeling for the correct amount of drag. 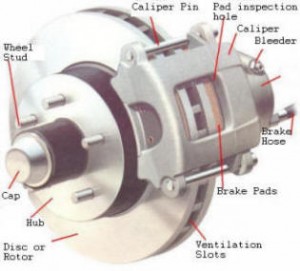 The materials used in modern brake pads also tend to be longer-lived. In many cases, you can go 40,000 or more miles before having to sweat a brake job. Contrast that with the past, when it was common to replace pads every other year – or sooner.

I recently did an oil change on a new (2013) Subaru and was surprised (and delighted) to find the oil filter “right there” and readily accessible – with the exhaust piping thoughtfully routed around the filter such that it was a snap to get my hand around it – and turn it out by hand. You could change this car’s oil and filter with just a crescent wrench (to loosen/remove the drain plug).

Same for things like air filter elements. In most new cars, you can access/replace the filter without using any tools at all. The lid of the box that contains the filter is typically held in place with snaps rather than screws or bolts. 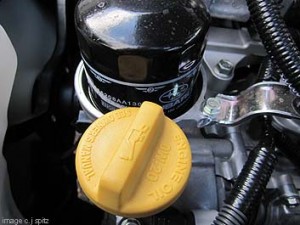 However, this is only a general trend. In some cases (BMWs being particularly notorious) it seems the manufacturer of the vehicle has deliberately tried to make serving the car harder.

Some advice, if you’re new car shopping and are the sort of person who likes to do basic service yourself: Raise the hood and take a look. Read the owner’s manual in the glovebox; see what it says about basic procedures such as oil and filter changes. Ask the salesman to show you where the dipsticks (oil, transmission fluid, etc.) are. Find out whether it’s feasible to change the oil on your own. Or will you have to take the car to the dealer? 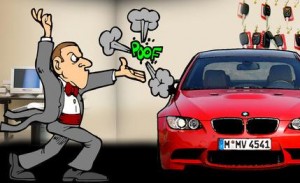 Some cars (those BMWs, for instance) don’t even have physical dipsticks anymore. And require that the car be hooked up to a special computer (which only the dealership has) for even basic, should-be-able-to-do-it-yourself chores such as replacing a dead battery.

These are things you’ll want to know about before the car is in your driveway.