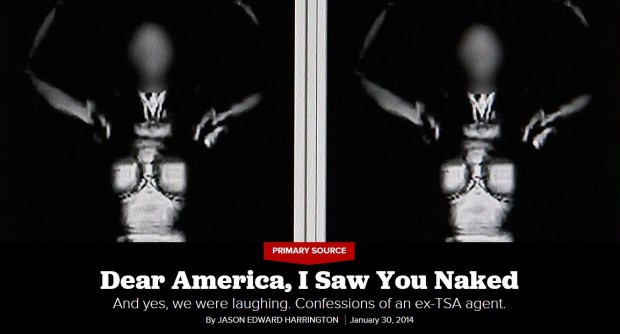 In an article for Politico Magazine, former TSA screener Jason Harrington exposed the endemic corruption which infests the federal agency, including how TSA workers laughed at naked images of passengers, targeted attractive women and harassed travelers who didn’t display the proper attitude.

Although most of his revelations were already known (we were labeled “conspiracy theorists” for saying the same thing), for guy who saw it with his own eyes every day from the inside to go public with this kind of information is huge. Given that Harrington’s article is lengthy, we’ve summarized the key points with relevant quotes from the piece below. 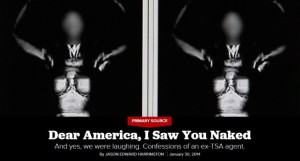 “Most of my co-workers found humor in the I.O. room on a cruder level. Just as the long-suffering American public waiting on those security lines suspected, jokes about the passengers ran rampant among my TSA colleagues.”

– TSA body scanners don’t work and are a huge waste of taxpayer money;

“We knew the full-body scanners didn’t work before they were even installed….Officers discovered that the machines were good at detecting just about everything besides cleverly hidden explosives and guns.”

– Jonathan Corbett’s video, which exposed how the body scanners could easily be fooled by placing an object in a sewn on side pocket, prompted the TSA to lie to the public while secretly changing their policy.

“Officially, the agency downplayed the Corbett video….Behind closed doors, supervisors instructed us to begin patting down the sides of every fifth passenger as a clumsy workaround to the scanners’ embarrassing vulnerability.”

“Many of my co-workers felt uncomfortable even standing next to the radiation-emitting machines we were forcing members of the public to stand inside. Several told me they submitted formal requests for dosimeters, to measure their exposure to radiation. The agency’s stance was that dosimeters were not necessary—the radiation doses from the machines were perfectly acceptable, they told us.”

“Then there was the infamous “guyspeak” in my “Insider’s TSA Dictionary.” One of the first terms I learned from fellow male TSA officers at O’Hare was “Hotel Papa,” code language for an attractive female passenger—“Hotel” standing for “hot,” and “Papa” for, well, use your imagination.”

“We would also sometimes pull a passenger’s bag or give a pat down because he or she was rude. We always deployed the same explanation: “It’s just a random search.”

– Most TSA workers hate the TSA;

“Most TSA officers I talked to told me they felt the agency’s day-to-day operations represented an abuse of public trust and funds.”

– The TSA does not stop terrorists;

“I hinted several times on the blog that a determined terrorist’s best bet for defeating airport security would be to apply for a job with the TSA and simply become part of the security system itself. That assertion stemmed from personal experience.”

– The TSA is a monumental waste of money and has been incredibly harmful.

“As I saw it, $40 million in taxpayer dollars had been wasted on ineffective anti-terrorism security measures at the expense of the public’s health, privacy and dignity.”

Florida Hero Beats The Shit out of Down’s Syndrome Man