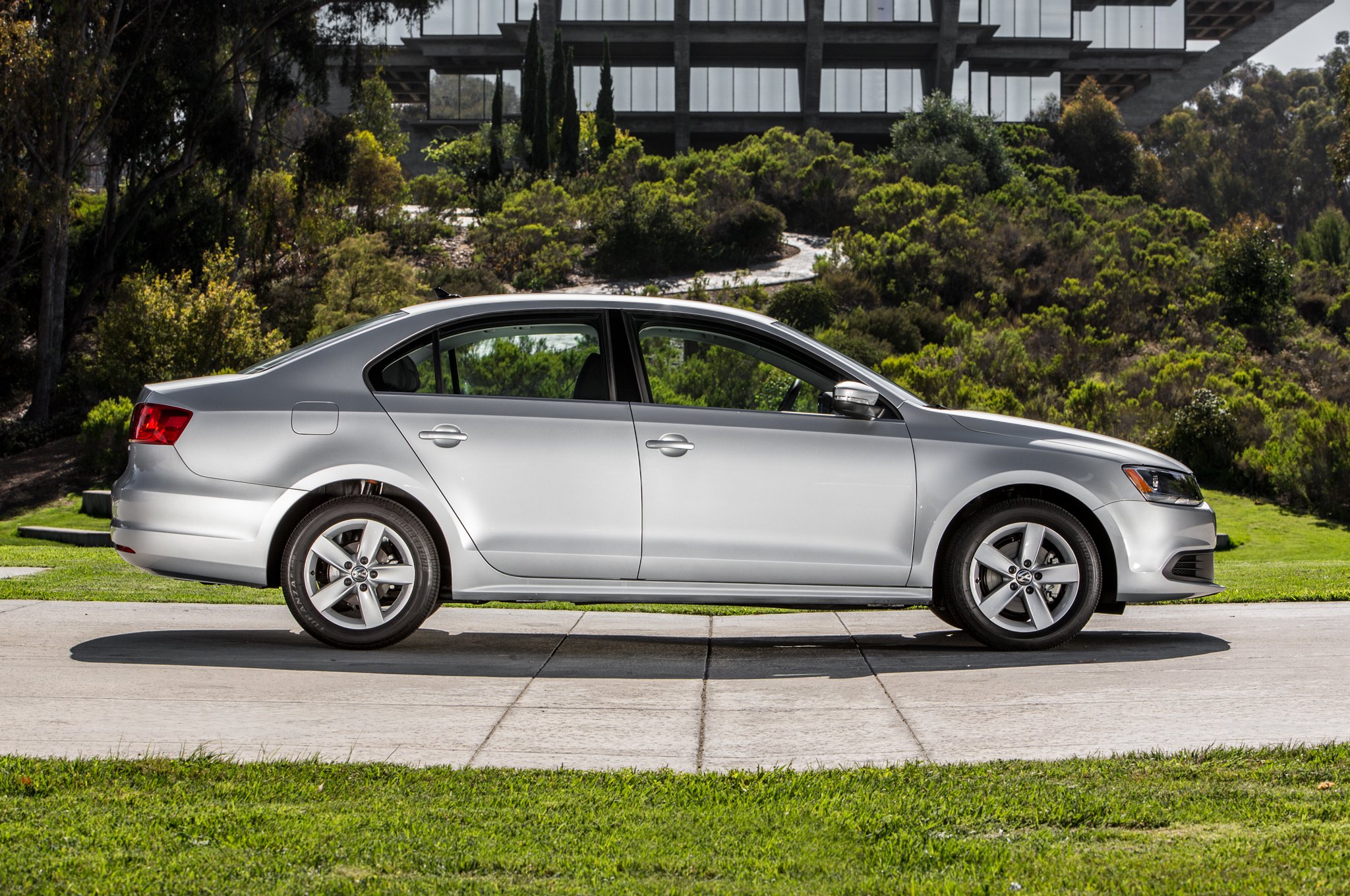 There are more diesel-powered cars available now than ever. Unfortunately, almost all of them are expensive cars. 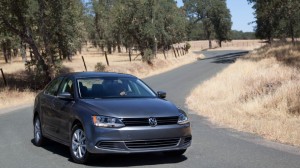 Its only competition is the Chevy Cruze diesel, which is the only other diesel-powered sedan you can currently buy for less than $25k.

But in the Chevy’s case, just barely.

Its MSRP is $24,985 – and unless you possess epic haggling skills, the out-the-door price (including taxes and tags) is almost certain to be over $25k.

Meanwhile, the Jetta TDI’s base price is just over $21k – so getting one out-the-door for under $25k ought to be doable.

But there’s more to it than just dollars and cents (and MPGs). The Jetta is also appealing for what it has – and hasn’t got.

Looks like someone brought a knife to a gun fight. 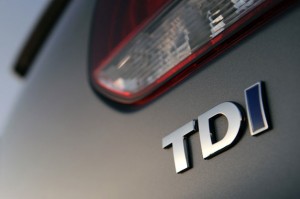 The Jetta is VW’s mid-sized sedan/wagon a bit smaller than the Passat  – a bit larger than the compact-sized Golf hatchback sedan.

It’s available with both gas and diesel and hybrid powertrains.

A Chevy Cruze diesel – the only other car in this class that’s available with a diesel engine – starts at $24,985. 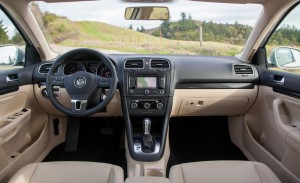 When the current Jetta came out a couple of years ago, there were complaints about cheap-outs, including drum rear brakes being standard. All 2014 Jettas come standard with four-wheel-disc brakes now, as well as an independent rear suspension.

Standard manual transmission – and no fuel economy penalty for selecting it. 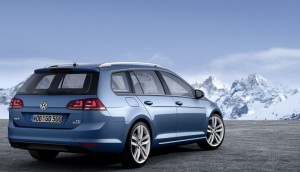 Vastly roomier inside (both rows) than the Cruze.

Quicker than the Cruze diesel (with either transmission) and just as economical to drive.

But costs less to buy.

They’re not giving them away?

You can’t turn the DRLs off?

TDI Jettas are propelled by a 2.0 liter, 140 hp turbo-diesel four-cylinder engine paired with either a six-speed manual transmission (standard) or (optionally) a six-speed DSG “automated manual.” The DSG is a more efficient form of automatic that combines design elements (and inherent efficiencies) of a conventional manual transmission but with the put-it-in-drive and forget-about-it convenience of a fully automatic transmission. 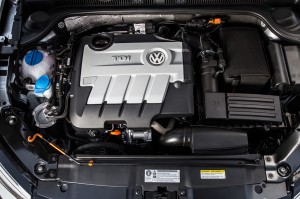 Interestingly, your rated mileage will be identical regardless of transmission choice. The manual six-speed Jetta and DSG automatic-equipped Jetta both deliver the same 30 city, 42 highway. Often, there will be a mileage penalty to pay for choosing a manual over an automatic transmission, but that is not the case here.

There is also a performance gap. 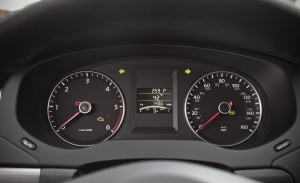 Both versions of the Jetta TDI (manual and automatic) are quicker than the Cruze, 0-60. The automatic-only Chevy gets there is 8.6 seconds while the DSG Jetta does the same deed in 8.4 seconds.

The manual Jetta is quicker still.

Why the disparity – given the Chevy’s got the stronger engine?

Another debit against the Chevy: Its diesel engine requires diesel exhaust fluid in order to pass muster, emissions-wise. This means periodic top-offs of DEF as well as diesel fuel.

The Jetta TDI manages to be smog-legal without the DEF.

This saves you some money – as well as some hassle. 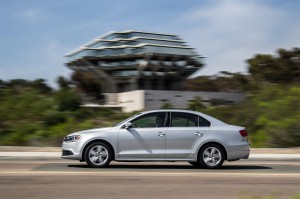 Diesels are known for their excellent mileage. As word gets out about their now-excellent performance, their popularity is certain to increase.

Consider: The Jetta TDI accelerates to 60 several seconds more quickly than a Prius hybrid – which needs 10-11 seconds to get there (vs. 8.2-8.4 for the TDI VW).

But there’s more to it than getting-going.

Another virtue of the diesel-powered car relative to a hybrid car is how at home it feels on the highway. Hybrids are optimized for low-speed (and stop-and-go) driving. On the highway, their powertrains are often working hard to keep up – especially at speeds over 70 MPH. The gas engine is not only on continuously (because at highway speeds, a hybrid’s electric battery drains in minutes, forcing the gas engine to kick on to keep you moving) it is small and underpowered – and it shows. 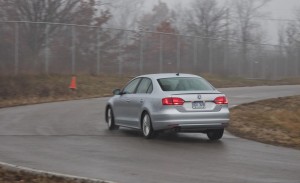 Lots of engine-revving contretemps. Very little in the way of reserves on tap.

Remember: A hybrid’s gas engine is only half the hybrid’s powertrain (the other half being the electric motor and battery pack) and it’s typically a very small gas engine. Or rather, small for the car. Because it’s only needed part-time and because that’s how hybrids save fuel.

A diesel-powered car like the Jetta TDI, on the other hand, happily hums along at 70-80 MPH with the engine barely working to maintain speed. It has no batteries to deplete. And it will go 600-plus miles (on the highway) before it needs a top-off. 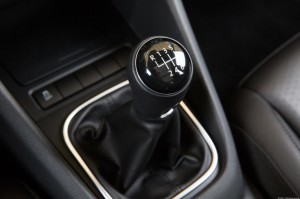 Now, you may have checked the specs and are saying to yourself: Wait a minute. The Prius is rated 48 MPG on the highway. That’s better than both the Jetta TDI and the Chevy Cruze diesel.

Keep it at 60-ish and the Prius’ mileage may be as advertised. But then, you’ll be the slowest moving thing on the road – a true Road Clover. If you keep up with traffic – which these days means maintaining 70-75 MPH on most highways – I assure you a Prius’ highway mileage will be nowhere near as advertised.

And not as good as the Jetta’s or the Cruze’s.

The other side of the coin here is that the Jetta TDI (and for that matter, the Cruze diesel) drives less clunky than the Prius, which handles awkwardly, does not appreciate sudden steering inputs (as when swerving to avoid a deer) and (per above) is much noisier under duress (as when accelerating). 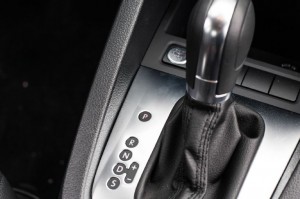 Relative to the gas-engined Jetta, the TDI Jetta’s other big plus is its down-low grunt. The diesel engine produces much more torque than either of the Jetta’s two available gas-burning engines. In fact, the TDI engine produces almost twice the torque of the base Jetta’s gas-burning engine: 236 ft.-lbs. vs. 125 ft.-lbs.) and makes it much sooner (at 1,750 RPM vs. 4,000 RPM).

Translation: When you push the “gas” pedal, the diesel engine pulls much harder with less pedal pushing. In fact, it will spin the tires if you push it more than half-way down coming off the line. The abundant and easily accessed torque (which is maintained throughout the powerband) also makes part-throttle merging and passing a relaxing experience. You will find that you rarely need to work the engine hard.

But it’s fun to do it sometimes. 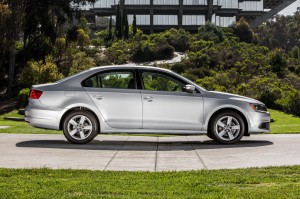 Take a gander: The Jetta has 41.2 inches of legroom up front and – here’s the really big one – 38.1 inches of legroom in the second row. Compare those numbers with the Cruze’s. It has slightly better front-seat legroom (42.3 inches) but its backseat legroom (35.4 inches) is not even in the ballpark. For those who haven’t got a calculator handy, the VW has almost 3 inches more legroom in the second row. That’s the difference between tight – and comfortable.

Inside and out, the Jetta is Teutonically tidy. Alles in ordnung ist. 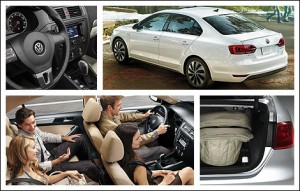 Thoughtful touches include a separate dome light for the second row occupants, controlled by a high-class-looking rotary knob.

I found one small thing – literally.

The center console storage area is hilariously tiny. You might fit a pack of cigs in it.

If we’re talking Chevrolet, that is a compelling argument.

Even if you manage to buy one for “sticker,” you’re still looking at about $25k. Which eats away a lot at the putative mileage advantage… relative to the Jetta.

And which will give you almost exactly the same MPGs, overall. 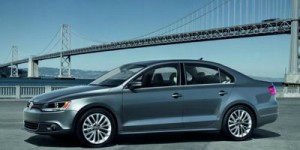 If you buy the Jetta TDI over the Chevy Cruze diesel.

Parenthetically, the same argument applies with equal force vis-a-vis the Prius hybrid, which has a base of $24,200. And while its mileage on paper might be better, in the real-world, it’s often not. And even if it were, the Prius will eventually have issues with its batteries. Whereas the TDI diesel should deliver Methuselean longevity (300,000-plus miles) before it begins to show signs of getting tired.

Or, from another angle: The money you save on the car can be put toward options. Maybe the eight-speaker Fender premium audio rig, for instance. 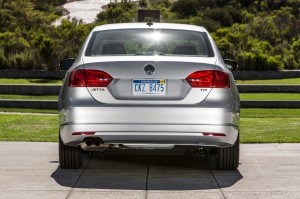 Sure, diesel fuel could be cheaper (it’s not, courtesy of the government) which would make a car such as this even more appealing.

But even given not-cheap diesel fuel, the Jetta TDI rights the math. This is a car thatmakes sense.

But which is also a lot more than merely sensible.