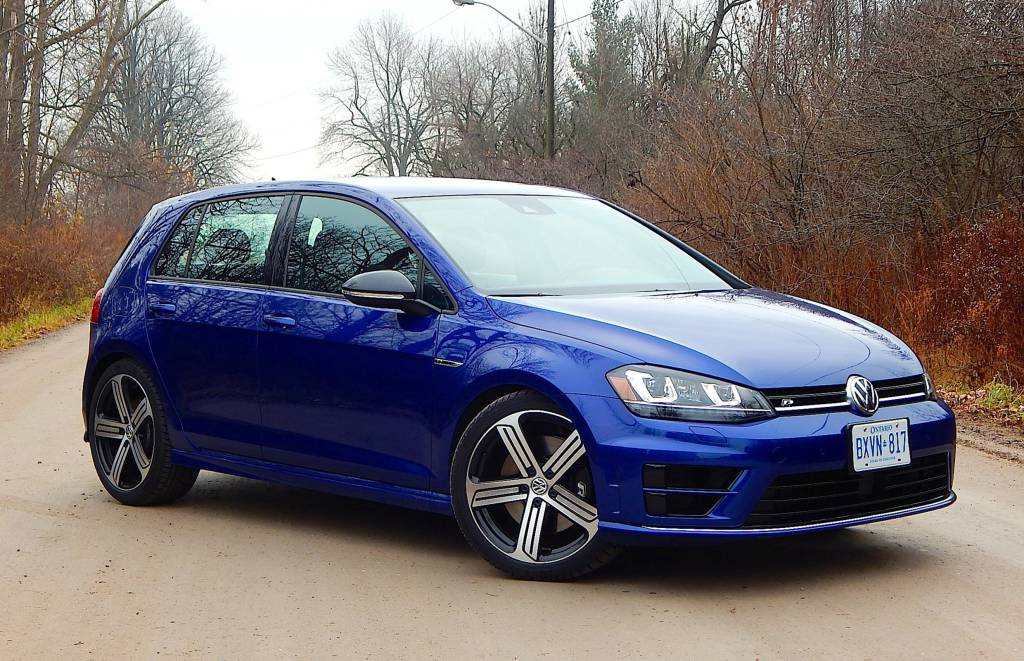 Here’s an irony for you: 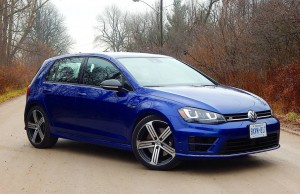 Ships passing in the night… .

Now VW has decided to make a manual transmission standard equipment in the Golf R – and lowered the MSRP vs. last year (and vs. the new Focus RS). 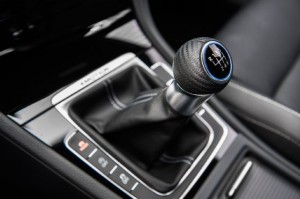 Probably, this was necessary to counter the Ford’s apparent performance advantage.

If you buy it with the automatic transmission! 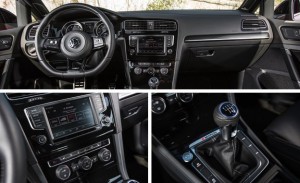 The Golf R is VW’s take on the “rally car” concept pioneered by the Subaru WRX STi and Mitsubishi Lancer EVO (RIP). Take a compact economy-car sedan/hatchback as your starting point. Chuck the economy car engine and replace it with a high-powered turbo engine; mate this to an all-wheel-drive system set up for maximum cornering grip. Lower it. Fit it with the most aggressive DOT street legal tires you can find.

The R is a smarter ride in this respect than the Subaru WRX STi or the recently retired Mitsu EVO – both of which were as subtle about their intentions as Bill Clinton macking on Miss Lewinsky. It has no wings, no gold-anodized wheels.

Such things may make a car look fast. I’d rather get away with going fast. 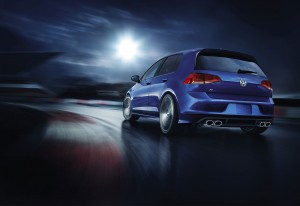 It rides like a car that has some pretensions to everyday driver status. The STi and EVO are (and were, in the case of the Mitsu) big fun for the first 30 minutes or so. Until your back began to ache – and the drone from the road/tire noise began to drive you nuts.

The Golf R will run with either of them, when you’re running all out. But it will also run all day without wearing you out.

Base price is $35,650 for the newly available manual-equipped base trim. If you prefer the automated manual (DSG) transmission, the sticker rises to $36,750.

A top-of-the line model with an adjustable suspension (DCC) lists for $37,895 with the manual six-speed and $38,995 with the DSG six-speed automatic.

The Subaru is a sedan-only deal, however and – like the Ford – it’s currently only available with a manual transmission. 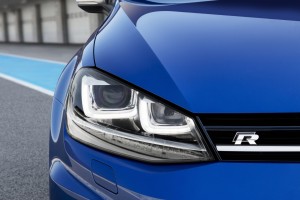 It’s not blatant. Other than the lowered ride and super-low-profile tires, it looks – at a glance – like just another Golf.  Which is what you want if you want to use this thing for its intended purpose.

Go manual (for fun and lower MSRP) or automatic (for quicker ET and less work in traffic).

Would you believe it gets not-bad gas mileage (vs. the WRX STi’s horrendous mileage)?

Roomier back seats (and more room for cargo) than Focus RS. 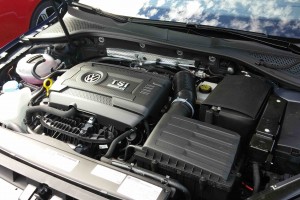 Engines may be getting smaller (to please Uncle) but the power being squeezed out of them isn’t.

The R is capable of getting you to 60 in the mid-fours …when it’s ordered with the automated manual (DSG) transmission.

The manual manual version is about 3/4 of a second less quick, needing 5.3 seconds to reach 60. 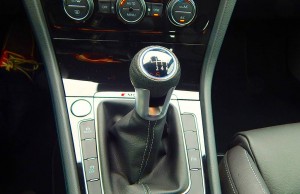 Why the disparity? The DSG has the edge in terms of quickness of shifts – as well as perfection of shift timing. It can do the 1-2 (and 3-4 and 4-5-6) with the syncopation of a computer-controlled maestro.

This, incidentally, is why the DSG-equipped R is quicker than the Focus RS (4.7 seconds to 60) despite the Ford’ s very impressive 350 hp (out of 2.3 liters) horsepower.

Because you can’t shift the Ford’s manual manual six-speed as quickly as the VW DSG shifts itself.

Same goes for the manual manual-equipped Subaru WRX STi. It has 305 hp – but needs 5 seconds to get to 60. 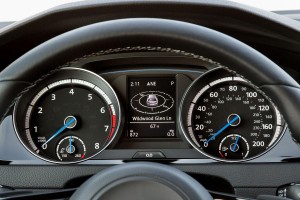 How about 17 in the city, 23 on the highway? Hilarious! You’ll be checking for holes in the gas tank.

That V8 Charger R/T mentioned a minute ago? It rates 15 city, 25 highway. And it weighs about 1,000 pounds more and has literally three times the engine (size-wise).

Premium fuel is recommended – but not required (same goes for the Focus RS, a chit in its favor).

The unfortunate STi requires it. 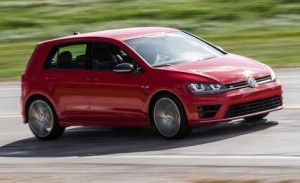 “Civilized” is probably not the word you’d expect to read in a sentence about a car capable of a sub-five-second 0-60 run.

No popping wastegate drama or tire chirping shifts marks your progress as the car builds speed.

The DSG box will get you there quicker, but the manual manual is much more fun. Particularly because VW has programmed the engine to rev beyond the advertised redline (just over 6,000 RPM) to almost 7,000 RPM – which is the real redline. At which point a “soft touch” rev limiter cuts in and that’s your cue to clutch in and move up to the next gear. 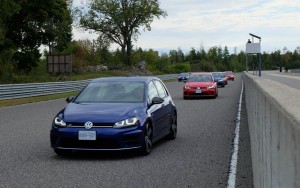 But it all happens without much in the way of fireworks. The exhaust gets boomier (exiting through four tips rather than two as in the GTI) in the upper RPM ranges, but it’s well within civilized range. Just enough to let you know you’re packing something; not so much that it annoys the neighbors every time you leave the driveway.

The same dynamic holds true for the ride. It’s civilized. Even with the optional 19-inch wheels and ultra low-profile summer tires (which are bundled with the DCC adaptive suspension) you do not know – in the biblical sense – the contours of every pothole.

It’s fun, a great track day car – but harder to live with as a daily driver/road trip ride. In addition to the engine noise and the washboard abs ride, there is a fair amount of wind/tire/road noise in the STi, too. 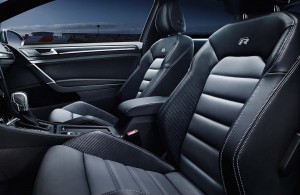 I haven’t yet driven the Focus RS – but it has a high standard to measure up to.

There is also this business of the automatic.

Also, check out the legs.

The VW can travel 450 miles on a tankful (14.5 gallons) while the Subaru runs dry after 365 miles (notwithstanding its larger 15.9 gallon tank).

That’s almost 100 miles’ difference in range between the two. 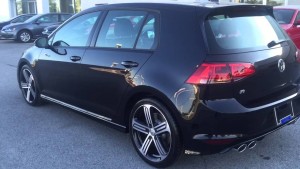 The R is visually quiet. Not even a hood scoop is there to give the game away.

It looks pretty much like a Golf. A four-door Golf.

Never advertise your intentions. You want to do – not look like you do.

The Boy Racer crowd will not appreciated this, of course. It’s why they are Boy Racers. A few years of SR-22 insurance will cure them. 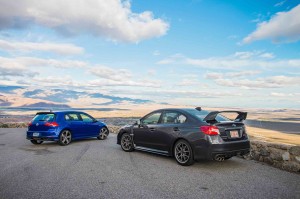 Nothing against either the STi or the Focus RS… provided they are driven to the track… at legal speeds. Otherwise, you probably won’t be driving either (legally) on the street for very long. These are just the realities.

And the R’s virtues.

Speaking of which. The R is a hatchback. The STi – for reasons known only to Subaru – is currently sold only as a sedan. Which means it has a trunk rather than a cargo area. 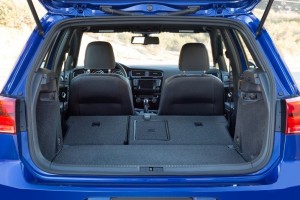 The Subaru has good back seat legroom (35.4 inches) but headroom is tightest of the bunch (37.1 inches).

But specs don’t convey the VW’s higher-rent ambiance. It is, after all, a VW – and a VW is almost an Audi… and an Audi is a luxury-brand car. No offense to either the STi or the Focus but both are based on Subarus and Fords … economy car versions of those Subarus and Fords. The R starts out with a nicer platform and has nicer materials (such as the real chromed metal trim pieces rather than plastic, the woven carbon fiber mesh on the shifter handle and leather that looks – and feels – like it came from a higher class of cow). 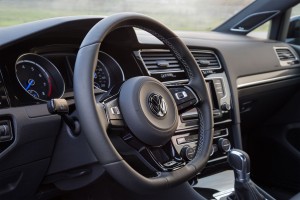 The only nit – if it is one – is that you can get the same interior (pretty much) in the much less pricey GTI (which starts around $24k).

Including the 200 MPH speedo.

But the R might actually be able to peg it.

The GTI not so much.

The weird little VW-specific pigtail for hooking up your iPod is nixed; there are now normal USB ports (and an SD card reader, too).

All trims get an updated LCD touchscreen, but it’s still a little small (6.5 inches) vs. some of the stuff available in other cars and there’s no optional upgrade.

The optional Fender audio rig is, however, top drawer.

My One Big Gripe with this car is that some of its systems – I’m not certain which – leak a lot of radar signal. Which gave my radar detector conniption fits. Constant false flag alerts. This of course impairs the usefulness of the radar detector – which impairs the ability to use the R. 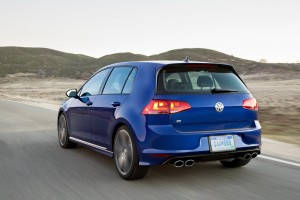 The R they sent me had the optional Driver Assistance package, which bundles adaptive cruise control with an automated braking/collision avoidance system and lane departure warning. I suspect it’s one or several of these “safety” systems that radiate the always-on radar signal (because some or all of these systems can’t be totally turned off).

My bet is the R without the Driver Assistance package would be more radar detector friendly.

Just the ticket… for avoiding tickets.