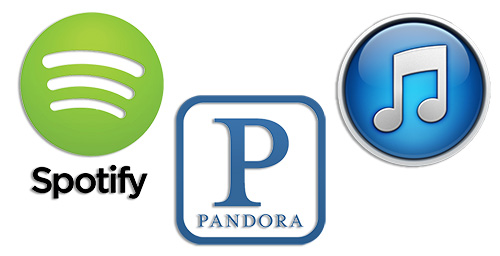 The thing with music is there’s often more than one owner. Singers often work with songwriters – sometime several. Ownership of the rights to a song can also change hands – and be shared in “slices” by several people, too.

So, who gets paid when a song gets played?

There are two ways to do this:

The easy way is for a business such as a restaurant, bar or streaming music service like Pandora to pay for what’s known in the business as a “whole work license.” As the term implies, a business pays a single general fee for playback rights.

This money is paid to music collectives called Performance Rights Organizations (PROs). The industry heavyweights – who own most of the publishing rights to most of the music Americans listen to – are the American Society of Composers, Authors and Publishers (ASCAP) and Broadcast Music, Inc. (BMI).

Because the two major PROs, ASCAP and BMI, together effectively control about 90% of the music (having contracts with most of the singer/songwriters) the federal government has imposed marketplace protections via anti-trust consent decrees. These consent decrees allow ASCAP and BMI to maintain their monopolies, but protect consumers from monopoly pricing.

Under decades long practice, a restaurant or other licensee pays ASCAP and BMI for the right to play music and that money is distributed to each stakeholder in a song.

This has simplified book-keeping and kept licensing costs within reason – while also allowing the PROs to make a lot of money. Both ASCAP and BMI have hit record revenues in recent years, with both each topping $1 billion last year.

Apparently, not enough money, however.

A few weeks ago, the PROs managed to get a federal judge in New York to overturn the current arrangement and in its place, impose a fractional licensing regime that’s as Byzantine as it will likely prove to be expensive.

Instead of paying a single general fee to license a catalog containing millions of songs, business and streaming music services would have to negotiate fractional licensing fees individually, to each part-owner of any song’s publishing rights – creating a book-keeping nightmare and a legal nightmare, given the potential for nuisance copyright infringement lawsuits.

Costs would either be transferred to listeners in the form of higher subscription fees (in the case of music streaming services) or businesses that pay to play music in their establishments could simply elect not to buy in – and refuse to pay to play.

Listeners would have less to listen to – and pay more for what’s left.

That’s assuming anyone can figure out whom – and how – to pay.

It’d be a miracle if anyone ever got to actually eat anything.

Worse yet, this judge’s decision could open tens of thousands of businesses across the country to greater copyright infringement exposure. In other words, more litigation or threats of litigation to coerce higher fees.

This is why the Department of Justice’s anti-trust division rejected the PRO’s pitch for fractional licensing. But ASCAP and BMI are big gorillas, not easily spurned. They beat their chests, shook the bars – and got a friendly federal judge, Louis L. Stanton of the Southern District of Manhattan, to overturn the DOJ’s ruling during a “preliminary conference” at which little testimony was given.

The PROs are claiming that fractional licensing is necessary to provide “just compensation” to the artists (singers, songwriters and others associated with the making of music) whose music rights they own.

But the music creators have little choice, because of the monopoly hold the PROs have on the music business.

All legal precedent and common sense aside, this is just another reason why Judge Stanton made a mistake ruling in favor of the PROs.

The DOJ ought to fight this one – and put the “gorillas” – ASCAP and BMI – back in their cage.

The Evil Has Died