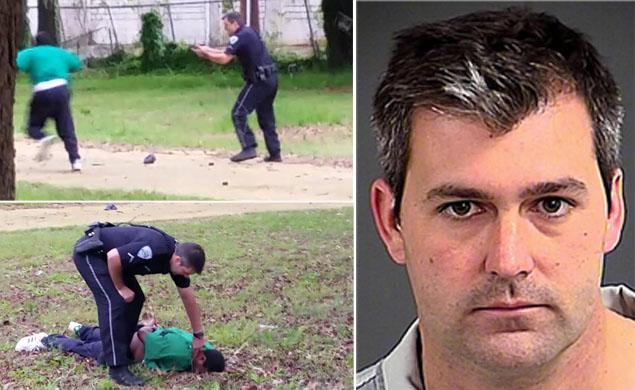 A bomb is about to go off.

Michael Slager, the former armed government worker (cop) who was video recorded shooting an unarmed man in the back eight times – as the man was running away from him – may not be convicted of anything.

A lone juror said they cannot convict a white former police officer who fatally shot a black man in South Carolina, and the judge asked for clarification from the foreperson as to whether the jury is hopelessly deadlocked.

The juror in a letter to the court said “I cannot in good conscience consider a guilty verdict” against Michael Slager, a former patrolman who pulled over Walter Scott in North Charleston, and ended up shooting him as a bystander recorded the incident on video.

The jury foreperson said in a separate note to the court that it was only one juror who was “having issues,” Circuit Judge Clifton Newman said. The juror opposed to conviction said in the letter, “I cannot and will not change my mind,” Newman said.

Slager was charged with murder in Scott’s killing, although the jury was allowed to consider a lesser charge of manslaughter in addition to murder. Slager’s attorneys requested a mistrial.

The facts – which are not in dispute – bear repeating:

Slager pulled Scott over for a nonviolent traffic infraction. Scott attempted to flee. He ran away. He did not confront Slager or approach Slager in a menacing or any other way. He tried to get away.

This is very important.

The law – which apparently applies only to us and not to armed government workers – requires two things before an ordinary civilian may legally resort to the use of a firearm in self-defense.

First, there must be a tangible threat of great bodily harm – defined as a reasonable belief, supported by objective facts, that one’s life is in immediate danger. The obvious example being confronted by an armed or otherwise threatening individual who has given clear indication he means to hurt or even kill you.

Second, that you cannot get away from the threat (i.e., you – if you’re not an armed government worker – have an obligation to attempt to retreat).

In plain language, the law requires you to demonstrate that you had no choice. That you were acting in self-defense.

How do Slager’s actions stack up?

The facts are that Slager shot a man in the back eight times – a man who clearly posed no threat to Slager. Scott wasn’t challenging Slager. He was trying to get away from him. Nothing would have happened to Slager had he just called it in. Slager wasn’t cringing behind his squad car in fear of his life. He calmly walk-trotted after Scott and shot him in the back eight times, almost casually.

For the “crime” of not obeying Slager’s orders.

Slager is a stone cold killer. He walks up to the body of his victim and leaves a Taser by his lifeless form, so as to have the excuse – Scott was armed! – he knows he will need to whitewash the murder he has just committed. 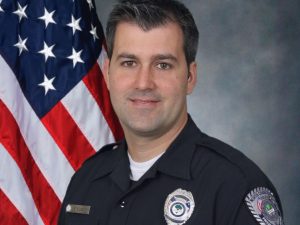 In law, this is guilty intent.

Does anyone doubt how Slager would have been treated absent the video evidence of his crimes? He would have been lauded as a “hero” who “feared for his safety” and “acted in self-defense” against a violent thug.

The video reveals a violent thug, certainly. But it is not Scott.

If this murder is judicially sanctioned it will be further evidence that armed government workers are a mortal threat to us. That we have very good reason to fear for our “safety” whenever one of these costumed creeps appears.

If they may shoot us down like dogs for nothing more than contempt of cop (Scott’s real “crime”) or because – and Slager actually trotted this one out in court – Scott “.. could have (!) turned around and charged him” – then we have an extremely sound reason to avoid armed government workers at all costs. Instead of pulling over for that broken tail-light or minor “speeding” ticket, a person increasingly has valid reason to drop the hammer – and more – out of fear for his life. Because he has a legitimate fear that the armed government worker could be another Slager – or maybe even Slager himself. (If Slager is not convicted, he could conceivably resume his career as an armed government worker – much like a pedophile priest transferred to a new diocese.)

We are subject to summary execution because we could have challenged/threatened/charged the armed government worker.

Not because we did – or even implied we might. Because we “could have.”

Which is why it is critical that this murderer be convicted and sentenced to prison for at least as long as any ordinary murderer would have been so sentenced. Arguably, Slager’s punishment ought to be more severe as he was acting under color of law, given life-and-death power over other people.

And – it appears – may soon get away with having abused.

Ford’s Boondoggling It Up, Too