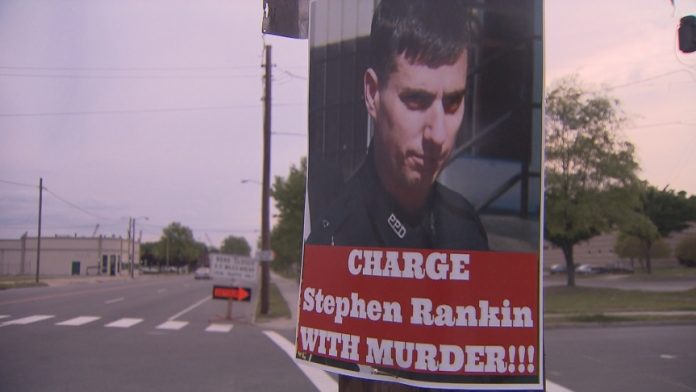 Among the many problems with – as it is styled – law enforcement – is this business of not holding the enforcers responsible, personally, when they violate the law. This obnoxious doctrine of sovereign or “qualified” immunity. Which transfers the economic costs of an enforcer’s unlawful actions onto the backs of his victims.

That is, onto the backs of taxpayers.

The enforcer beats someone up or (as below) murders someone… and the victim or the victims’ family sues and gets a settlement from the people who didn’t do the beating or commit the murder.

The enforcer may go to jail or prison (rarely and, usually, lightly) and might lose his job. He rarely loses everything. Because taxpayers get the tab.

Former Portsmouth Officer Stephen Rankin shot and killed William Chapman on April 22, 2015, in the parking lot of the Wal-Mart on Frederick Boulevard.

The officer was investigating a shoplifting report when he approached Chapman, and a physical altercation ensued.

A jury convicted Rankin on Aug. 4 of voluntary manslaughter and recommended he serve 2½ years in prison. Circuit Judge Johnny Morrison imposed the full sentence last month during an emotional hearing.

He argued the city and Hargis were negligent in hiring and retaining Rankin and that Rankin wrongfully killed Chapman.

Babineau and the city reached the settlement before he filed the suit, though.

According to the petition, Portsmouth is willing to pay the Chapman estate $1 million as long as the family agrees not to pursue claims against the city, Hargis and Rankin.

Earl Lewis, a cousin of William Chapman II who serves as a spokesman for the family…lamented the case won’t go to trial.

He said an investigation spearheaded by Babineau had unearthed a lot of new information about Rankin and the Police Department. And he pointed to a BBC documentary that aired Wednesday in the United Kingdom with an interview from a former Portsmouth police lieutenant. The lieutenant said he warned his supervisors about Rankin before the Chapman shooting, but nothing happened.

“We still haven’t gotten all the facts,” Lewis said, arguing that a trial could have resulted in new revelations with the possibility of a larger monetary award. “Me, myself, I am a betting man. I would have taken it to trial.”

Lewis argued a lawsuit against Wal-Mart might still be warranted. And Babineau said he is researching what liability the retailer might face for calling police on Chapman and following him outside.

“We are not aware of any evidence indicating William Chapman stole anything,” Babineau said.

What’s wrong with this picture?

Why is a person who wears a government costume entitled to be held not-financially-responsible for his criminal actions? If an ordinary citizen lets an underage kid swim unsupervised in his backyard pool and the kid drowns as a result, not of malice, but merely due to the negligence of the homeowner, the homeowner will be sued and held personally financially responsible.

Enforcers – armed government workers – should be held to at least the same standard. But because they aren’t they are given an incentive to exercise less caution – to be more aggressively trigger/Tazer and beat-down happy.

Neither is the solution:

Hold enforcers personally liable when they abuse the law. So they always have it in their minds that an unprovoked beat-down or shooting may cost them their home, put them (and their family) in the poorhouse.

As opposed to handing off the tab for the mayhem they cause to taxpayers.

Reader Question: Buying a Classic Car to Drive Every Day?