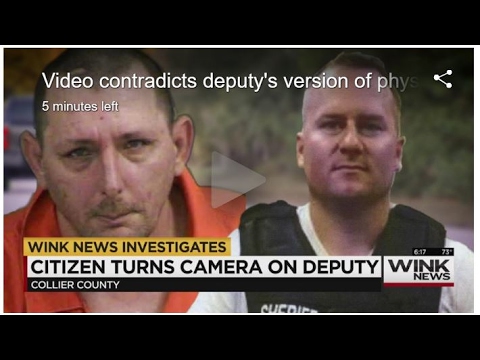 This one’s the pick f the litter… so far:

“There has been this pattern of relentless sort of, I believe, intimidation. Following him, they’ve stopped him several times, driving by his home, and I believe it is in retaliation for the notice to sue.”

As a result, Drellos-Thompson advised Harris to place a GoPro camera within his vehicle to record any time he is stopped or in any other way harassed by local police. That turned out to be a very fortunate thing for Harris. In the arrest report filed by Sgt. Wingo, he characterizes Harris as being the aggressor who initiated the physical confrontation that followed and even accuses him of taking his taser away and attempting to use it against him.

Harris was stopped by Wingo on Friday for having the wrong license plate on his vehicle.

When Wingo walked up to Harris, who was sitting inside a Ford Escort, Harris said he wanted to contact his attorney, but Wingo then pulled out his Taser and threatened to kill him, Drellos-Thompson said.

In an arrest report, Harris said “I am not doing anything until I contact my lawyer” after Harris asked for his driver’s license and registration.

“Sgt. Wingo informed Robert that he cannot call his attorney now and requested him to step out of the vehicle,” the report said. “Sgt. Wingo began to open the driver door in order to have Robert step out. At that time Robert put his phone down, reached through the open window with both hands and pulled the door shut, obstructing Sgt. Wingo with his investigation.”

Wingo was pulled into the Ford Escort by Harris, where a struggle ensued, the report said.

Wingo tried to use his Taser, but Harris was able to grab it, then attempted to use it on Wingo, the report said.

All of that was contradicted by the footage from the GoPro camera and once again the charges against Harris were dropped once that video became public. Not surprisingly, Sgt. Wingo was not himself charged with any crimes for the assault he very clearly committed or even the perjury he committed within the arrest report. Instead, the taxpayers in Florida will be on the hook for another settlement whenever this lawsuit works its way through the system as a result of Wingo’s actions.

Along with the Video, this description was included:

Video contradicts deputy’s version of physical encounter. Naples, Fla. Deputy pulls motorist over. Motorist and deputy get into a physical altercation. Motorist is charged with assaulting deputy. Charges are dropped against motorist – for the second time.

Recently released video of a traffic stop involving Collier County Sheriff’s Office Sgt. Kasey Wingo and Robert Dale Harris – taken from inside Harris’ vehicle – showed a confrontation different from what Wingo told supervisors. “Prosecutors try to back the officers,” said Lee Hollander, Harris’ defense attorney. “I mean they lean that way, obviously, and for good reason. But, sometimes [they] just can’t do it.”

Wingo was named in a lawsuit Harris filed against the sheriff’s office in Sept. 2016. Deputies claimed Harris assaulted them after he was found behind a storage lot in 2014. State prosecutors later threw out the case.

The two men encountered each other again in Dec. 2016 on Palm Spring Boulevard. Wingo stopped Harris for having another vehicle’s plates on his car. Wingo asked for Harris’ license, registration and insurance, but after Harris said he was contacting his attorney, the situation escalated quickly.

Wingo claimed Harris initiated the escalation. “[Harris] reached through the open window with both hands and pulled the door shut…Robert leaned back in the vehicle pulling me into the vehicle with him,” he said in an official report. But a camera inside Harris’ vehicle told a different story. Footage showed Wingo opening Harris’ door, then entering the vehicle after Harris said he was calling his attorney.

“I believe the officer, in my mind, should have identified why he was stopping Robert and giving Robert an opportunity to respond,” said Dawn Drellos-Thompson, Harris’ civil attorney. “Robert did nothing to escalate that situation.”

Hollander, Harris’ criminal attorney, retrieved the video and showed it to state prosecutors. They dismissed Harris’ charges. “We clued them in about the [2014] case and the six month notice that you have to file prior to suing in federal court and they reviewed it in that light,” Hollander said.

Without the video, it would’ve been Wingo’s word versus Harris’, Hollander said. “It probably would have been a whole different ballgame,” he said.

The sheriff’s office declined to comment on the incident due to the initial lawsuit and an intent to sue letter the department received in relation to the traffic stop altercation. “I can tell you that we believe Sgt. Wingo’s actions were within CCSO policy and the law,” said Karie Partington, media relations manager for the sheriff’s office.

When asked if Wingo will face perjury charges for lying in an official report, the State Attorney’s Office said he was not. “Upon review of the available evidence, we do not have a case against the law enforcement officer at this time. If something else comes to light, we will review it,” they said in a statement.

Wingo remains employed as a deputy in the East Naples patrol district. Meanwhile, Harris spent over a month in jail during the Christmas holiday.