A Colorado Hero who was caught on tape beating his teenage daughter was arrested and charged with child abuse after the video originally came to the attention of authorities. 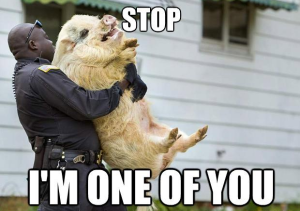 Berthoud Hero Jeremy Yachik, 35, has been charged with four counts of child abuse and one count of false imprisonment, according to a report by The Denver Post.

In a press release the Loveland Police Department says they received an email on Sept. 24 alleging that Yachik abused a juvenile months ago within Loveland city limits and conducted an investigation. During that investigation both Yachik and Berthoud Police Chief Glenn Johnson were put on leave and were put under a criminal investigation by Loveland Police and the Larimer County District Attorney.

The tape, obtained by KDVR-TV, shows a darkened figure of a man standing over teen who is on the floor crying. The man can be heard asking the girl, “You had what?” She replies “carrots,” and the man appears to hit the girl before saying “exactly,” and kicking her.

According to an arrest affidavit obtained by 9News, Yachik’s daughter — who turned 15 on Oct. 20th — detailed years of physical abuse by her father that included being choked to the point of blacking out, being force-fed ghost pepper sauce whenever Yachik accused her of lying, restraining her hands with handcuffs or plastic zip ties, slamming her head so hard into a wall that it left a hole and more.

Loveland Police said that Yachik, who is 5-feet-11-inches tall and weighs 270 pounds, even admitted to all of his daughter’s abuse allegations and admitted that he was the one seen in the video, in the affidavit.

The video was sent by Yachik’s ex-fiance, who alleged that she and the teen had endured years of physical abuse at the hands of Yachik. In the affidavit, Yachik’s ex told the Loveland Police that she originally sent the video to Berthoud Police Chief Johnson but never received a response.

Just imagine what this Hero would do to you…. or your daughter/wife.