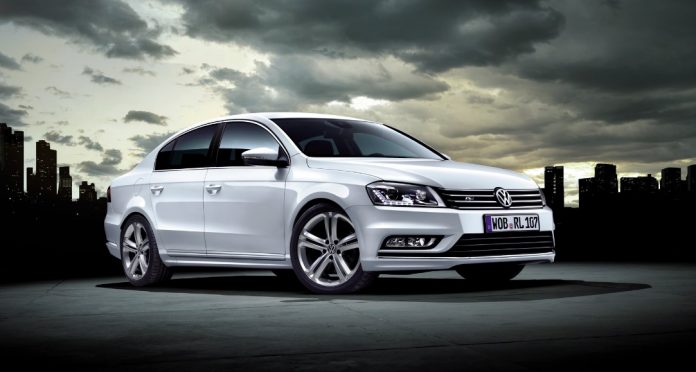 As I type this review of the 2018 VW Passat, almost 400,000 of its fellows sit baking in the California desert – punishment for having “cheated” on federal exhaust emissions tests. They are destined to be scrapped, even though there’s nothing wrong with them – other than their having affronted Uncle.

Because of that affronting, the Passat no longer offers the brilliant TDI diesel engine that used to be available in it and most of VW’s other models. Fractional (literally) differences in legal vs. illegal quantities of exhaust emissions have put the kibosh on an engine that was 20-30 percent (whole numbers!) more fuel-efficient than any gas-burning equivalent and which routinely exceeded the advertised EPA city/highway mileage numbers. 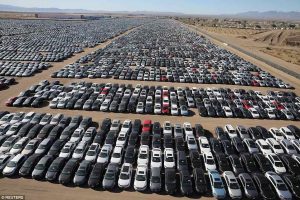 I can vouch for this personally, having test driven every TDI-powered VW in the inventory.

Well, which used to be in the inventory.

People ought to be outraged. Not about the “cheating.” About the vilification of VW and the murder of one of the most efficient (and by dint of that, clean) engines which used to be available – and for a fraction of the cost of an elsewhere emissions electric car and thousands less than the cost of a hybrid-electric car.

The good news is that the Passat – and other VWs, for that matter – is more than just a shell around an exceptional engine, now gone.

For one thing, it’s big for its class.

And for its price. 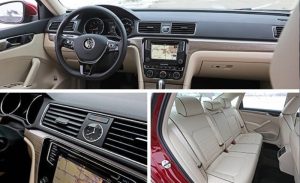 A look at the specs reveals it to be nearly full-sized on the inside. But it has a mid-sized car’s MSRP.

For another thing – and unlike all the cars it competes with – it’s directly related to a much-pricier German luxury car.

For one more thing, it’s still available with a V6. This is a type of engine that’s almost extinct in this class as car companies try to cope with the federal government’s other fatwa – the one that decrees every new car must average “x” miles-per-gallon or be socked with “gas guzzler” fines. 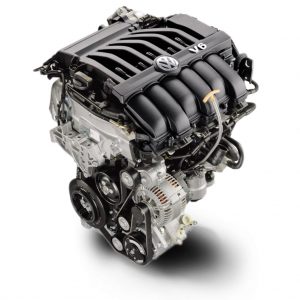 The just-redesigned Honda Accord, as a for-instance, no longer offers more than a four. Neither does the Mazda6, another Passat cross-shop.

So, while you may not be able to get a diesel Passat there are still several excellent reasons to buy a Passat.

It’s got a smaller footprint than full-size sedans like the Chevy Impala and Toyota Avalon – but nearly as much room inside. And more room than mid-sized cars in this segment such as the Toyota Camry.

It’s also the only car in this class with German prestige-car kinship. 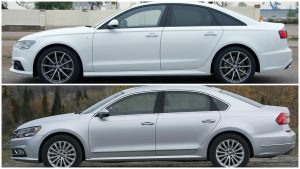 Prices start at $22,995 for the base S trim, which comes with a turbocharged four paired with a six-speed automatic.

Like most of the others in this class – excepting the new Accord – no manual transmission is available.

The Passat now comes standard with a larger turbocharged four – 2.0 liters vs. 1.8 liters last year – and a bit more horsepower than before – 174 hp now vs. 170 hp last year.

There’s no change in the rated output of the V6, though – so the GT isn’t speedier than last year’s SE/SEL V6. 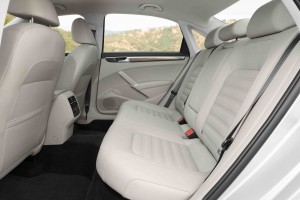 $10k less to start than a comparably spacious full-size sedan such as the Toyota Avalon.

No horsepower/performance uptick for the new V6 GT.

New Honda Accord has more room inside – and a bigger trunk. 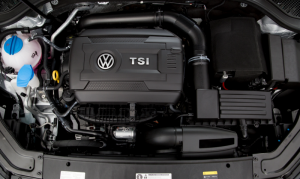 The Passat differs from its rivals in that its standard four cylinder engine isn’t a weak engine.

It’s VW’s excellent turbocharged 2.0 liter four, which is closely related to the 2.0 liter turbo four used in Audi models like the A4 and A6.

This is much better on both counts than the four cylinder version of the Impala, which isn’t particularly fuel efficient (22 city, 31 highway) and noticeably less quick (0-60 takes about 8 seconds) because it’s heavier. 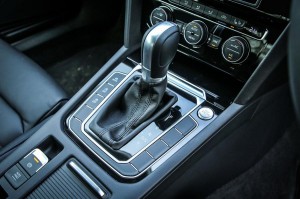 So, the 2.0-equipped Passat is something of a wild card in this class.

The only downside – if you’re a gear-jammer type – is that VW no longer sells a manual transmission with the Passat. It’s been taken off the roster for reasons of fuel economy uber alles. 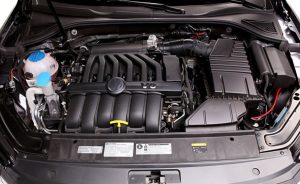 Thus, a six-speed automatic is standard. It has regular and Sport modes and you can manually (well, electronically) hold gears longer when in that mode.

If you want to keep pace with the V6 Avalon and Impala with its optional V6, you’ll want the available 3.6 liter V6, which makes 280 hp and is paired with a speedier-shifting six-speed automated manual (DSG) transmission.

So equipped, the Passat gets to 60 about a second sooner than with the turbo four – and about as quickly as the V6 Avalon/Impala – both of which are larger outside and (again) heavier than the VW. 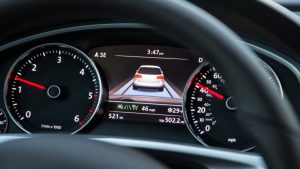 You could also go with the Toyota Camry or Accord – the Jetta’s nominal mid-sized rivals. The just-updated Camry is nearly as roomy (though not quite, in back) but – per above – to get one with a V6 means spending about $4k more than you will on a V6 Jetta.

And the Accord no longer offers a V6 at all.

Same goes for the Mazda6, which is only available with a four. 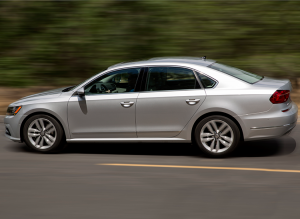 You won’t be disappointed by the four cylinder Passat’s ability to get going.

The turbo engine’s maximum torque (184 ft.-lbs.) is made at  just 1,500 RPM – and it’s maintained throughout the power band – so it’s at your disposal whenever you need it.

As a counterpoint, the four cylinder Impala’s torque peak (187 ft.-lbs.) isn’t achieved until you spin the engine to 4,400 RPM – which is 75 percent of redline. Real-world driving-wise, you have to floor the Impala’s gas pedal (and keep it floored) to wring anything approximating acceleration out of it – whereas light pressure on the Passat’s accelerator results in immediate forward thrust.

The Impala’s a very nice big lug of a car – but in four cylinder form, it’s under-engined. The  V6 Avalon/Camry are nice, too – and neither are under-engined.

But they are more expensive. 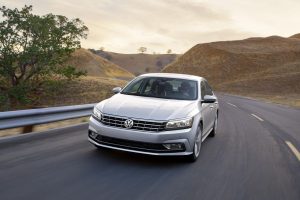 The 2.0-equipped Passat is neither under-engined nor expensive.

You can buy the V6 to get more engine, but it’s not necessary to get enough engine.

In addition to its generous spread of torque, the 2.0 liter engine also has a fun over-rev feature that adds to the spiciness of the experience. Put pedal to the metal and the engine will spin about 600 RPM into the red zone of the tach (about 6,500 RPM) before the transmission shifts up to the next gear. Don’t worry – it’s ok – the engine is built to handle this or VW would not have programmed it to spin that high. 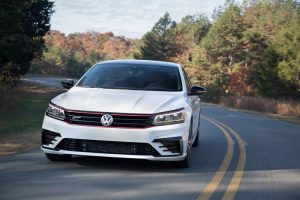 If you like to corner, spring for the R-Line or the new GT. You’ll get bumped up not one, not two but three sizes, wheel-wise, from the base car’s 16-inch rims to 19s, shoed with sport tires that sharpen the car’s already excellent reflexes and without killing the ride quality. This is a point worth harping on for a moment. It is often the case that going with 19 or 20-inch wheels results in a car that feels like a Harley hardtail on anything but glass-smooth pavement, of which there’s not much in these days of crumbling infrastructure. 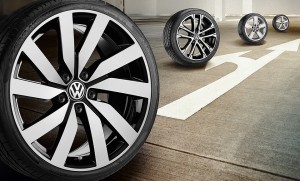 VW (being Audi) knows how to dial in suspensions for handling without killing the car’s ride.

A big part of that equation is getting a handle on the car’s weight.

Ask a chassis engineer about dealing with that. About tying it all down.

Even the Avalon is a fatty compared with the VW – which is surprising for a Toyota. 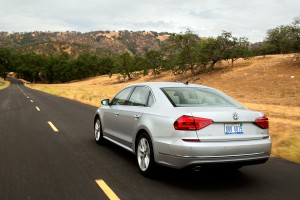 Both of them – the Impala and the Avalon – are great highway cars and exceptionally comfortable cruising-around-town cars. But don’t try to keep up with a Passat in the curves.

Another tangible metric of the VW’s superior maneuverability is its much tighter turning circle – 36.4 feet vs. the Impala’s 40 feet and the Avalon’s 38.8 feet.

This isn’t a big surprise given both the Impala and the Avalon are larger on the outside. 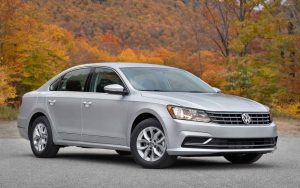 Visually, the Passat is less striking than the sleek – and imposing (due to its larger exterior size) Impala.

But its Audi-echoing silhouette is handsome, even elegant –  and best of all, there’s no gaping catfish face – a styling trend afflicting too many new cars that will hopefully eventually go away, like parachute pants.

The Passat is mid-sized in terms of its exterior footprint: 191.9 inches long overall vs. 195.3 inches for the full-size Avalon and 201.3 inches vs. the Impala. 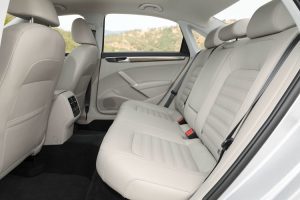 But check the interior specs.

The one measure where the VW is mid-sized in terms of interior space is trunk space. It has 15.9 cubic feet of trunk space vs 18.8 cubic feet for the Impala.

On the other hand, the Avalon’s trunk is only 16 cubic feet.

The new Accord is the only nominally mid-sized car (on the outside) that matches – or even beats – the VW’s specs for legroom (42.3 inches up front, 40.4 in the second row) and trunk space (16.7 cubic feet). 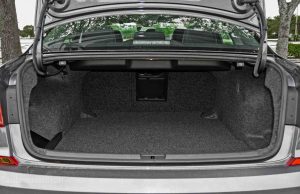 You can get electronic idiot-proofing such as collision mitigation with automatic braking, a blind spot monitor with rear cross-traffic alert and lane departure warning. But these are all optional and so (for now) avoidable.

A foot-swipe trunk opener is available and the Passat has Car-Net smartphone integration which includes Android Auto, CarPlay and MirrorLink. 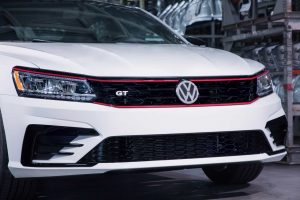 The new GT package is an interesting start. But it’s missing the one thing that a performance package ought to have.

VW probably wanted to offer it – and it would probably be a minor matter (software/tuning) to kick up the output of the V6 to 290 or 300 hp.

The problem is the fatwas.

More performance means lower MPGs and while people who buy performance cars worry about that as much as Trump cares about the feelings of Hillary Clinton, the Hillary Clintons who occupy the federal regulatory apparat care very much about the MPGs your car delivers – and will punish you (via fines imposed on the car’s maker) for using what they consider to be “too much” fuel.

The good news is that Trump is – apparently – dialing back on the fatwas and that means we may see more performance in next year’s Passat GT. Might be worth waiting.

It’s also no longer under your control, except for the turning on and off.

You control the pull-up emergency brake

The murder of the TDI diesel is among the outrages of our time. But the Passat isn’t down for the count.

Hopefully, neither is VW.