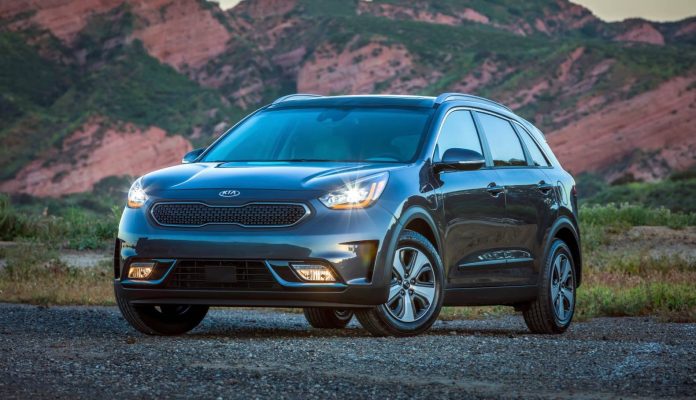 Plug-in hybrids are all about It Depends.

Not the adult garment. The calculation: What you get vs. what you spent divided by how  far you drive.

What you get with a plug-in hybrid like the 2018 Kia Niro is the capability to charge the battery externally – without relying on the car’s internal gas-burning engine, as with a regular hybrid. You also get the capability to drive the car on just the batteries – just like an electric car – only without having to worry about stopping (and waiting) to recharge. 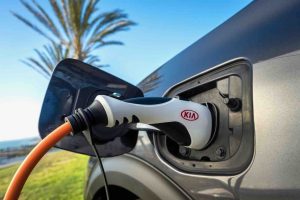 And you have to spend several thousand dollars more vs. a regular hybrid to get that extra measure of electric-drive (and external charge) capability.

The Niro – like the Toyota Prius – is a dedicated hybrid. 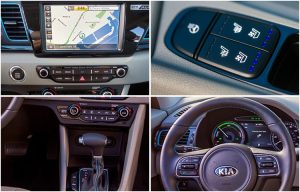 Dedicated hybrids are much less compromised than converted hybrids. Their trunks/cargo areas aren’t eaten up by batteries added as an afterthought.

And they are lighter and so more economical. 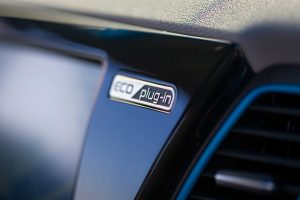 The Niro – whether plug-in or not – is also different in some other ways.

For instance it is much roomier inside than the bigger-on-the-outside Prius. It has four inches more backseat legroom – and almost twice the total cargo capacity – because it’s laid out as a small crossover SUV rather than a hatchback’d sedan.

The Niro also has more room than the much larger and much more expensive ($33,400 to start) Honda Clarity plug-in, which is almost two feet longer overall but has less backseat legroom – and only a fourth of the cargo room in its 15.5 cubic foot trunk.

The next-closest thing the Niro is probably its brother-from-the-same-mother, the Hyundai Ioniq. Which is without question the best deal going in a plug-in hybrid. The Ioniq – which has the same drivetrain as the Niro – is just $24,950 to start. 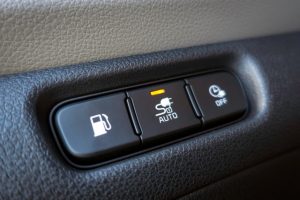 External rechargeability makes it possible to keep the batteries topped off without burning any gas at all.

Exceptionally roomy for its size – and vs. others of larger size.

Range on the batteries-only is 20-something miles, best case. After that, you’re burning gas just like everyone else.

And burning slightly more gas than the regular Niro.

Several hundred pounds heavier than the regular Niro, due to the bigger battery pack. 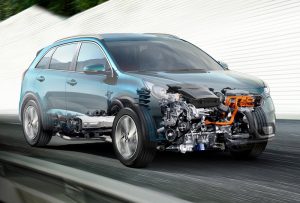 Both Niros have the same 1.6 liter gas engine, paired with a six-speed automated manual transmission and front-wheel-drive.

And, of course, the ability to recharge externally via the plug-in port on the driver’s side front fender. This takes about 9 hours using an ordinary 120V household outlet or 2.5 hours using a high-capacity 240V outlet such as the one you plug your dryer or electric stove into. 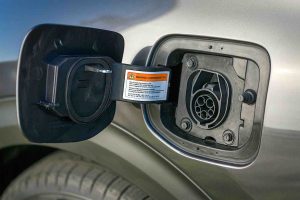 Kia says the Niro can travel as far as 26 miles on a fully charged battery – relying on just the battery (and electric motor) for propulsion.

This differs from the usual hybrid deal in which the battery pack and electric motor provide supplemental power, assisting the IC engine when extra acceleration is wanted and running the car’s accessories when the vehicle isn’t moving. Some non-plug-in hybrids can move a little on battery power – but not very far. Usually, no more than 2-3 miles. And not very fast – up to about 25 MPH or so.

The plug-in Niro can operate at highway speeds on battery power alone – until the batteries run low on charge. When they do, the 1.6 liter comes on and will mostly stay on until you can plug back in. 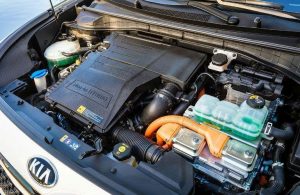 Curiously, the plug-in Niro’s gas mileage stats are slightly lower than those of the regular hybrid Niro: 48 city, 44 highway vs. 51 city, 46 highway.

Well, not so curiously, actually.

The plug-in Niro is lugging around more weight – 3,391 lbs. vs. 3,161 lbs. for the regular Niro – which has the same effect on gas mileage when the gas engine is running as driving your pick-up around with an engine block in the bed.

However . . . you can plug the thing in. And you can’t do that with the regular Niro.

If you can – and don’t forget to – you can up your average mileage considerably. Because the gas engine isn’t running. 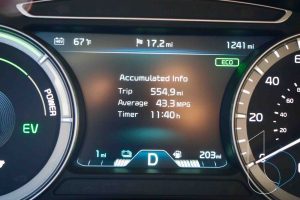 If you start your 20 mile commute work with fully charged batteries, you might get there without burning any gas at all – much better gas mileage than the regular Niro. And even if you can’t plug in at work or just forget to, you’re still only burning about half the gas the regular Niro would on the same trip.

Of course, electricity isn’t free – and neither is the plug-in capability. Do the math.

Another virtue of both Niros is quickness.

Zero to 60 in 8.6 seconds, which is almost two seconds quicker to 60 than the Prius. The plug-in version of that one does get better mileage – 55 city, 53 highway but the Niro (either way) is almost as economical and a lot more fun to drive.

Like the regular Niro, the plug-in Niro is powerful enough to scorch the tires from a rolling start. The ability to do burnouts is not why people buy hybrids, of course. But it gives people who like burnouts an inducement to buy this hybrid.

Why shouldn’t it be fun to use less gas?

And even if you don’t fry the tires, you will probably appreciate being able to move while you’re saving gas. 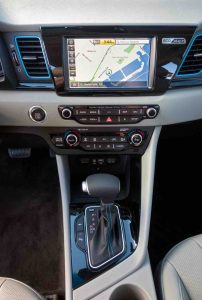 In a way, hybrids are like turbocharged cars in that the electric motor boosts torque – with the difference being no wait for the boost to build. Electric motors make boost at 0 RPM. As soon as they spin, there it is.

And there you go.

The dual fuel (electric and gas) nature of the Niro plug-in also gives it flexibility as well as economy.

Pure electric cars burn no gas, of course – but you’re stuck when they run out of charge. Then you have to wait at least 30-45 minutes to recover a partial charge, before you can get going again. A Tesla may be quicker than a plug-in hybrid like the Niro, but the Niro isn’t range limited. When it runs low on charge, the gas engine automatically takes over and you keep on going.

You can refill or recharge, at your pleasure.

Be advised, though, that the Kia’s range on the batteries is dependent on how you drive – which will determine how far you can drive on just the batteries. If most of your driving is on level ground and you can maintain steady speed most of the time (limited stop-and-go driving) and you keep your speed under 60 MPH, you should be able to cruise for 20-something miles on the batteries. 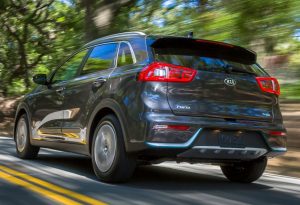 On the other hand, if your drive involves hills or you drive faster than 60 or you have to stop and get going a lot (which takes a lot of energy) your range on the batteries may be significantly less.

My drive into town – 26 miles away – can be just about done on a full charge – because most of the getting there is downhill, which is good for electric-powered vehicles because you’re mostly just coasting and you can translate some of the kinetic energy of coasting into charging, extending the car’s range.

But the trip home is almost all uphill – steeply uphill. An elevation gain of more than 1,500 feet. That had the batteries working hard and sucked them dry in about half the time. 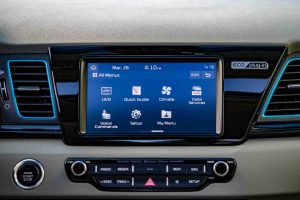 On the upside, even with the battery charge down – and no more full EV mode – the Niro never averaged less than 43.4 MPG on the gas side of things.  The only cars I’ve test driven during the past 20 years that can touch this are the diesel-powered cars which were no longer allowed to have.

Though it’s not light, the Niro doesn’t feel heavy – probably because its batteries are more evenly distributed than in any converted hybrid. Though it’s marketed – and looks like – a small crossover SUV, it sits pretty close to the ground (6.3 inches of clearance) and that further helps with handling stability.

Unusually, the Niro does not use a continuously variable (CVT) automatic transmission – which most hybrids do, because of the efficiency advantage. But there is also a noise problem with CVTs.

No such problems here, another plus. 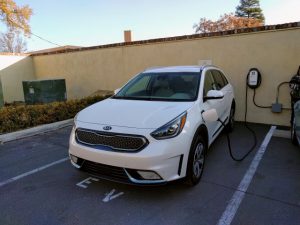 The Kia’s six-speed automated manual does have a Sport mode – but the only discernible difference between that mode and Drive is that the LCD instrument cluster displays a tachometer to show engine revs rather than other drivetrain parameters.

The main benefit is that the six-speed automated transmission is quieter than the CVTs used in other hybrids (including the Prius). Floor the Niro and your fillings won’t seem like they’re being shaken loose by a screaming engine, held at close to redline RPM by the CVT transmission.

Because the Niro hasn’t got a CVT. And because it has power to spare, you won’t feel the need to floor it nearly as often, even if it did.

Outside of Kia circles, not many people are even aware of the Niro and if they see one, they figure it’s another compact crossover SUV.

Which is understandable because the Niro doesn’t look like one – and Kia hasn’t done nearly as effective a marketing job as Toyota has with the Prius, which has become synonymous with “hybrid.”

But Kia has arguably done a better job in terms of designing their hybrid. 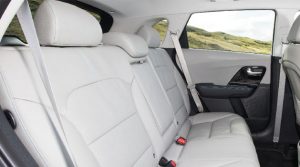 The Niro is 171.5 inches long overall – which is just shy of a foot shorter overall than the Prius, which is 182.9 inches long. But while the Kia may have the smaller footprint, it’s got more room inside that footprint, including 37.4 inches of backseat legroom vs. 33.4 in the Prius, a big difference of 4 inches – as well as 54.5 cubic feet of total cargo capacity (second row folded) vs. about 27 cubic feet in the Prius.

So the Kia fits more easily into tight parking spaces than the Prius – and fits more comfortably inside, too.

It also has a roomier backseat and more cargo capacity than its Hyundai brother-from-the-same mother, the Ioniq – which has 35.7 inches of second row legroom and 23 cubic feet of total cargo capacity. 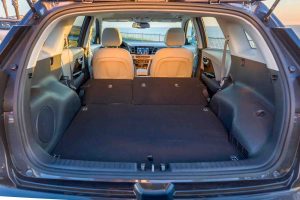 Most startling, perhaps, is how much more interior space the Kia’s got vs. the almost full-sized Honda Clarity – which is 192.7 inches longer overall (almost two feet longer overall) but only has 36.2 inches of second row legroom and a downright tiny 15.5 cubic foot trunk.

Also inside the Niro are fewer hybrid gimmicks. No Game Boy toggle shifter, for instance. Instead, a familiar console-mounted shifter that moves back and forth from Park to Drive like a normal car’s shifter. The benefit is feel. You can tell whether you’re in Park or Drive or Reverse by the physical position of the shifter. No tapping – and guessing. 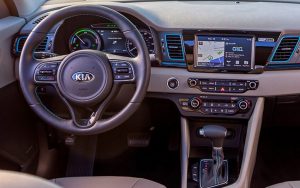 There is a hybrid-specific gauge cluster (with charge/power readouts, range on the batteries, etc.) and some hybrid specific trim, including blue-anodized surrounds for the air vents and blue accent stitching for the steering wheel – but the only obvious sign of hybrid-ness is the extra fuel door on the driver’s side front fender. That “fuel” being electricity, which you feed it via the plug-in cord that comes with the car.

Economy cars aren’t what they used to be. Even the “base” LX trim comes with climate control AC, A 7-inch infotainment display, a four-speaker satellite radio-enabled stereo, push-button ignition and adaptive cruise control. Lane keep assist and automated emergency braking are also part of the base equipment package. 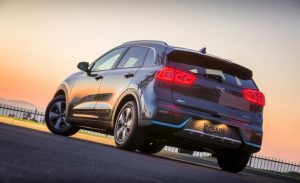 Blue anodized trim, definitely. Blue Light Special not so much.

The Niro is a pick-of-the-litter among hybrids. But will it save you money?