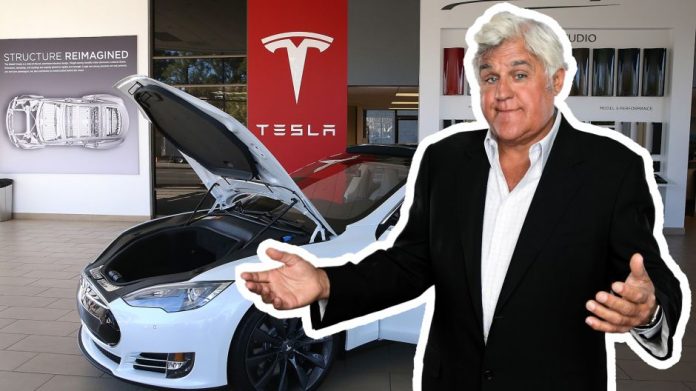 Jay Leno used to be funny – and now he is again. Just unintentionally.

“There is almost no reason to have a gas car,” he announced on CNBC the other day. “I have a Tesla. I’ve had it for three years. I’ve never done anything. There’s no fluids to change. There’s nothing.”

Jay – who styles himself a Car Guy – ought to know better. Assuming he knows anything about cars.

No fluids to change?

Well, no oil/transmission fluid to change.

How about brake fluid? Electric cars have this fluid, just like any other car – and it does need to be changed. It’s a good idea to change it about once every  . . . three years. Tesla recommends a check every two.

There is also coolant. Whoops!

And of course, electric cars have tires and brake pads and other wear items that . . . wear out. Jay – like everyone else who drives any car – will eventually have to do not only something but several things.

Including a few things people who don’t buy electric cars will never have to do. 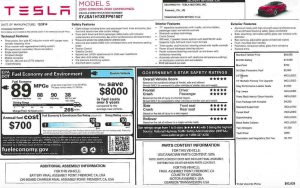 The first thing he did was pay tens of thousands of dollars more for his electric car. Which costs him a great deal more than oil and filter changes.

He also paid to install a high-voltage “fast” charger at his garage, which added about $1,000 (for the parts and the electrician to do the wiring).

This essentially mandatory option – unless you don’t mind waiting 8-12 hours to recharge on standard 120 volt household current – isn’t listed on the window sticker. But not paying for this option is like not springing for tires for a non-electric car.

It’s hard to get rolling. 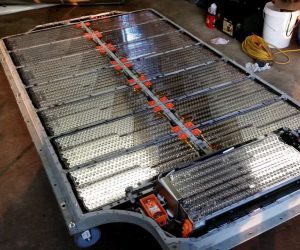 So far, he hasn’t paid the motor fuels taxes which are applied to every gallon of gas bought by non-electric car drivers. But that is going to change – and then Jay (and every other EV owner) will have to do another thing:

Pay for their currently free lunch.

He’ll also eventually have to do something people who don’t buy electric cars will never have to do: Spend thousands on a new battery pack when the one in his Tesla begins to lose its capacity to receive – and retain – a charge.

Which will increasingly and then dramatically reduce his car’s driving range – ultimately to nill. Which is something that never happens to a non-electric car, unless the engine locks up or the transmission starts to slip.

Which sometimes happens, but not often. And not necessarily. You may never have to deal with that problem… if you don’t own an electric car.

But you will have to deal with it if you own an electric car. Maybe not for five years – or even ten. But, eventually,

Battery “ED” – so to speak – always happens, because of battery chemistry. The cycle of discharging/charging batteries is – effectively – wear and tear on them and it wears them all out eventually. This can be put off via “thermal management,” and by restricting “fast” charging” to not quite full charging (which reduces the full-charge range).

But it can’t be avoided. Battery wilt is as inevitable as a clutch eventually wearing out in a non-electric car with a manual transmission.

Transmissions – and engines – eventually wear out, too.

But not as soon. And they don’t cost as much.

A  clutch job might be necessary once every 100,000 miles or so – if you’re hard on the thing – and it’ll generally cost you less than $1,000 bucks to fix. A transmission job is rarely necessary at all. Most non-electric car drivetrains will last the useful life of the vehicle, which is easily 15 years or more.

It is doubtful – and probably impossible, as a matter of chemistry – for a battery subjected to repetitive discharge/charge cycling to last 15 years or even 10 before it begins to show signs of wear and tear (won’t hold charge/loses charge more rapidly). Which means the car won’t go as far before it needs to be recharged again . . . which accelerates the wear and tear.

Presto, you need a new battery.

And replacing a Tesla’s battery pack will cost you thousands more – on top of the tens of thousands extra you already paid for the car.

These seem like pretty good reasons to not buy an EV. 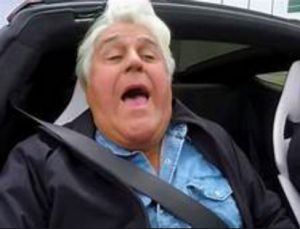 Jay told MSNBC: “For new technology to succeed, it can’t be equal. It’s got to be better.”

Which is why it’s hilarious to listen to Leno say that about cars that aren’t.

Of course, Jay has literally dozens of other cars – so he never has to sweat how far his Tesla can go or how long it takes to recharge, because he can always take something else. Which is true of most electric car owners. They own a non-electric car to cover the electric car’s deficits. To take them on the longer trips the EV can’t make without multiple stops – and long waits. To have a car that they don’t have to plan their day around.

That they can just get in, spur of the moment – and go.

Why not just skip the EV? Buy one non-electric car that doesn’t practically force you to buy a second car?

Which brings us to the final thing. 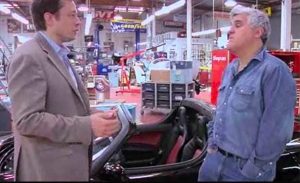 Jay is very wealthy – another thing that is true of almost all electric car owners. They have to be – in order to be able to afford spending many thousands of dollars more for their electric cars – plus the spare non-electric car, which they need for the same reasons most of us buy non-electric cars: To be able to get where we’re going, right now.

And back again. In the same day.

But not everyone is wealthy – like Jay and his idol, Elon Musk. Who is wealthy because of subsidies – paid for mostly by people who aren’t – and can’t afford to buy Teslas like the one Jay’s driving around.

It’s a hoot – possibly his best monologue to date.

Except he didn’t mean for it to be funny.