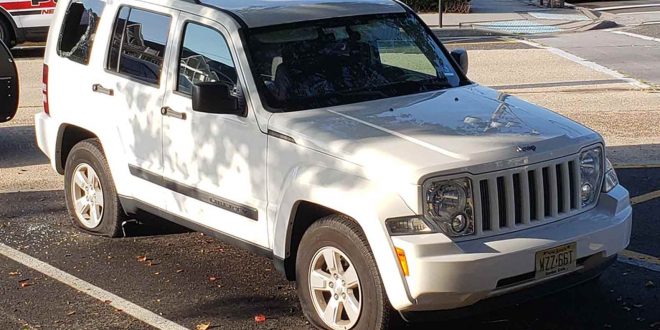 A pair of NJ AGWs decided to exact revenge on a man who dared to file a complaint against them by putting on masks and smashing out the windows and slashing the tires of two of the man’s vehicles:

The Monmouth County Prosecutor’s Office has charged officers Stephen Martinsen, 29, and Thomas Dowling, 26, both of Asbury Park, with conspiracy, criminal mischief and weapons offenses. The officers are accused of vandalizing two vehicles in Ocean Grove and Asbury Park early on Sept. 3, authorities said.

“It is alleged that officer Martinsen and Special Law Enforcement officer Dowling did purposely damage both vehicles, both owned by the same person,” a press release from the Monmouth County Prosecutor’s Office said. “The vehicle owner had filed an administrative complaint against both officers several days before the vandalism incidents.”

Authorities said the two officers wore disguises when they rode their bikes to the vehicles, smashed out windows and slashed all the tires.

The victim, Ernest Mignoli, is an outspoken critic of Asbury Park and its police department. In an interview with NJ Advance Media, he said his “jaw dropped” when he learned that the people responsible for damaging two of his vehicles — a white Jeep Liberty and a Toyota Prius — were police officers.

“I just wouldn’t think it would be in the scope of police officers to do something like that,” he said. “I’m a concerned citizen, outspoken critic of Asbury Park Police Department. But this goes behind the pale.”

Mignoli would not comment on the nature of the administrative complaints he filed. But he said he’s constantly keeping a watchful eye on the police officers in the city he has lived in for 12 years.

“I’m constantly harassed by police wherever I go,” he said. “It’s just the nature of my work.”

Martinsen, a member of the Asbury Park police force since 2013, has been suspended without pay. Dowling was fired.

Asbury Park police Chief David Kelso said in the press release that the actions of these two officers “is not acceptable and does not represent the level of professionalism, community focus or resident safety that we expect of our officers.

“We will not let the actions of these officers overshadow the great work and dedication by the men and women of this department,” he said.

The officers could not be immediately reached for comment.

Now, try to visualize the consequences if vehicles owned by AGWs had their tires slashed and windows broken by a citizen. The offender would likely be charged with felony “terrorist” acts against the AGWs and instead of a fine and firing, they’d be looking at permanent and crippling repercussions.

Just another example of the special treatment AGWs get . . . as opposed to vicious treatment they mete out to us.

Do you suppose there might be a cause and effect relationship?