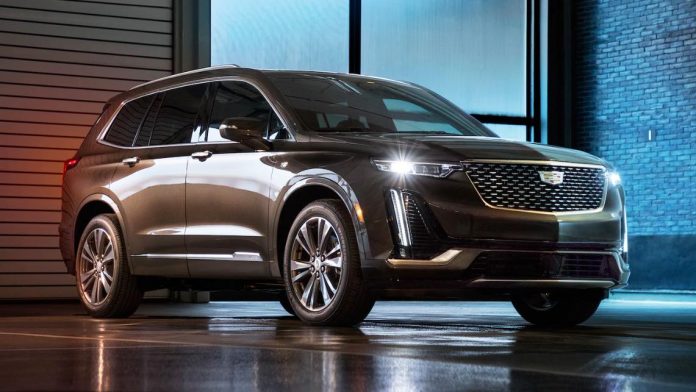 Cadillac already has a three row SUV  . . . so why make another one?

Probably because it needs a different kind of three-row SUV. One that’s almost as big – and nearly as roomy –  as the one it already has in the lineup.

Just not as expensive.

Until now, the Escalade was the only Cadillac that could accommodate more than five people. It’s also the most expensive Cadillac, with a base price of $75,195 that sails to six figures when fill spec’d out.

That’s a price only a few people can afford – even including Cadillac buyers. 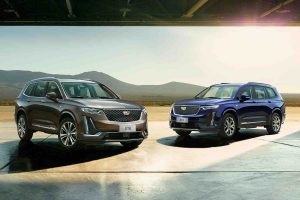 Technically, the seven-passenger/three-row XTS is a crossover SUV – the difference being it’s more more car-like than truck-like under its skin.

The Escalade – which is a rouged-up cousin of the Chevy Tahoe – is based on GM’s half-ton truck architecture. It has body-on-frame construction and comes standard with a big (6.2 liter) V8. It has truck-type four-wheel-drive with 4WD low range gearing.

The XTS has an integrated body and frame – unibody construction, like most cars – and is front-wheel-drive, with an all-wheel-drive system available. It does not offer low-range gearing – and it comes with a smaller (3.6 liter) V6 and a lower 4,000 lb. maximum tow rating. 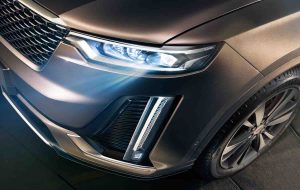 Yet it has just as many seats – and almost as much room.

The XT6 is a new model, just added to Cadillac’s roster. It slots in above the XT5 – and below the Escalade. It’s also another Cadillac that’s not a car – which few seem to want anymore, regardless of price.

Cadillac used to sell cars exclusively as recently as the ’90s. The came the SUV craze. We’re now in the midst of the crossover craze. 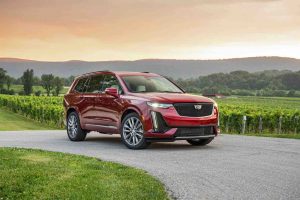 The why probably has to do with cars – including Cadillacs – having gotten smaller by the ’90s and people still wanting something that wasn’t.

Not as hulking as the Escalade.

Newer than the Escalade – which hasn’t been significantly updated since about five years ago.

Almost as thirsty as the Escalade – despite having a lot less engine.

Like the Escalade, there’s surprisingly little room behind the third row.

All XT6 trims come standard with a 3.6 liter, 310 horsepower V6 paired with a nine-speed automatic and either front-wheel-drive or all-wheel-drive. 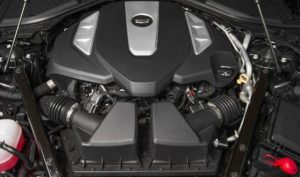 The V6 is more or less the same engine used in many GM vehicles – including the current Camaro.

XT6 competitors like the Audi Q7 and Mercedes GLE-Class come standard with much smaller four cylinder engines that have to be turbocharged to make up for their lack of displacement.

But all that boost increases stress on the engine and adds more parts to the vehicle – both of which could and probably will eventually lead to more expense down the road. Besides which, the little fours still don’t make as much power as the Caddy’s doesn’t-need-a-turbo V6. The Q7’s standard 2.0 liter four only summons 248 hp – and the Audi has the effrontery to cost more than the Caddy ($53,550 to start). You can get a supercharged 3.0 liter V6 in the Audi – and it makes a more respectable 329 hp. But that’s hardly more power than the Caddy’s V6 – and for a lot more money ($63,300 to start – which is about $6k more than a loaded/top-of-the-line XT6). 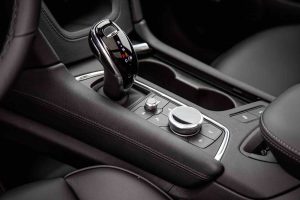 Also interestingly – and not as laudably – the XT6’s 3.6 liter V6 uses only slightly less gas than the Escalade’s enormous – and enormously powerful – 6.2 liter V8, which makes 420 horsepower and manages a not-bad (for that much power) 14 city, 21 highway. 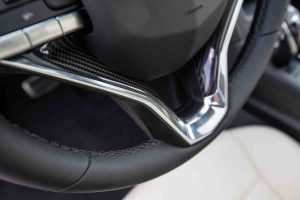 It’s also less than rivals like the Q7, which can pull 4,400 lbs. – even with the much smaller (2.0 liter) turbocharged engine under its hood.

With its optional supercharged V6, the Audi can pull 7,700 lbs. – nearly as much as the V8 Escalade.

One more thing. While the Caddy’s V6 doesn’t have a turbo – or an intercooler – it does have direct injection. And doesn’t have a port-fuel-injection circuit to forestall carbon fouling of the valves because of the DI.

Several manufacturers have added a dedicated PFI circuit to the fuel system – not to fuel the engine but to to address the carbon-fouling issue that DI engines are vulnerable to. It’s an interesting question as to which is more stupid – not adding the stand-alone PFI circuit (whose only job is to wash the backsides of the valves, to keep them from gunking up) to address the DI-created problem or replacing PFI with DI in the first place – which adds significantly to the complexity and cost of an engine without any meaningful benefit to the vehicle’s buyer.

The government has effectively forced the industry to switch over to DI in order to achieve angels-on-the-head-of-a-pin differences in miles-per-gallon (for CAFE purposes) and emissions (for EPA purposes) reductions.

It’s all make-work, made at your expense. 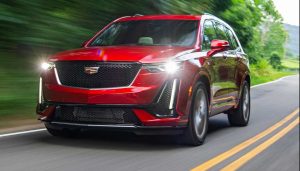 Though it’s nearly as long as the Escalade – 198.5 inches vs. 203.9 – The XT6 has a shorter (and not as tall) hood, which makes it feel like a smaller, more maneuverable vehicle.

It is definitely a much lighter vehicle – by about 1,500 pounds.

That’s a difference you can feel – especially in the curves.

While the Escalade rolls along like a Pullman sleeper car once you’re out on the highway and pointed straight ahead – which is nice –  all that weight (5,856 lbs. vs. 4.411 for the XT6) sloshes around in the curves. 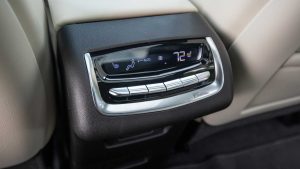 This problem is magnified by the Escalade’s 8 inches of ground clearance vs. 6.7 for the XT6. Cadillac has done a lot to hide the fact that the Escalade is a rouged-up Tahoe – and the Tahoe is basically a Chevy Silverado truck with its bed enclosed and carpeted and seats bolted to the floor – but there’s only so much you can do to make a truck behave like a car.

Being almost 1,500 pounds lighter also explains why the XTS is nearly as quick as the Escalade, despite having an engine only slightly more than half the size. The Escalade gets to 60 in about 6.1 seconds, the XT6 in about 6.8 – a difference discernible only by the stopwatch.

But the Escalade feels less thirsty because it has a much larger fuel tank – 19 gallons for the FWD version vs. 26 for the Escalade. You can actually drive the V8-powered and 1,500 pounds heavier Escalade about 150 miles farther on a full tank. 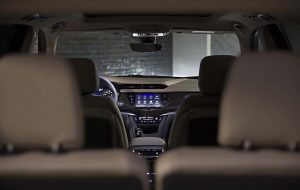 The V6 is a nice, revvy engine – and the nine-speed automatic is calibrated to let ‘er rip to the near 7,000 RPM redline with pedal to the metal.

Shifts come faster than you can keep track of them, too – there being literally twice as many as was typically the case only about ten years ago. This isn’t a bad thing – as such – either. The V6 rabbit punches its way through all nine, then settles down to a near-idle at 80-plus MPH highway speeds, something made feasible by the 0.62 overdrive gearing in ninth.

This is one area where Uncle’s fatwas have had the unintended happy side effect of making new cars better. The steep overdrive is an expedient used to squeak out more MPGs- and the nine-speeds are there to “step” the transmission to that steep OD without lugging the engine mid-way there.

But an incidental thing occurred along the way that is far from insignificant. We now have cars that can cruise at speeds that require almost no RPMs to maintain. As a  point of comparison/reflection, a car like my ’76 Trans-Am spun its engine faster to maintain 55 than the XT6 does to maintain 75.

And that’s all right, momma. 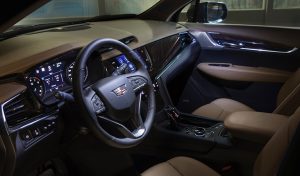 The XT6 hasn’t got the loutish presence of the Escalade – but that’s probably something many would-be buyers would rather avoid.

The Escalade is a love it – or hate it – thing. Some people buy it because of its loutish looks; but just as many likely don’t – for exactly the same reason. But that’s not the only reason to prefer the less-louty XT6.

It has the room – as well as the seats.

With its third row folded flat, the XT6 has 78.7 cubic feet of cargo space. That’s not quite as much as the Escalade’s 94.2 cubic feet. But it’s about 85 percent – and the XT6’s third row is roomier (29.5 inches of legroom) than the Escalade’s – because of the XT6’s crossover architecture and lower floorpans. 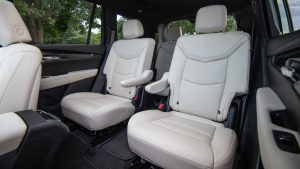 And you don’t have to duck.

The XT6’s second row seats have a minivan-like “tip and pitch” function that makes getting to the third row easier, tool. 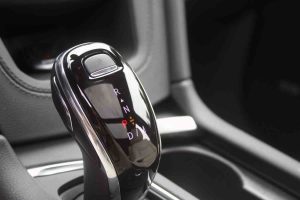 The Escalade – being an older design – is less encumbered by all this sssssssssssafety Christmas Tree-ery. It has fewer lights and buzzers hassling you.

GM is particularly pushy when it comes to force-feeding this stuff. It’d be nice if these “assists” were available – and so, avoidable. 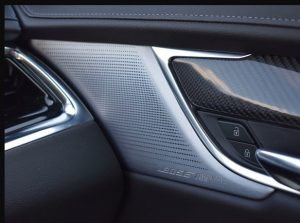 While crossovers are common, the Cadillac’s available infra-red night vision system is pretty uncommon. The XT6 also has rearview mirror with built-in closed-circuit view of what’s behind you when you’re backing up.

The BMW-style toggle shifter on the center console is highly imitative and lacks tactile feedback but it’s in keeping with the weird modern obsession to electrically activate everything. 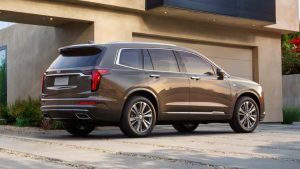 It is, however, also at least implicitly creepy. GM knows your preferences, too b- and can access your XT6.

This is The Future.

That said, the XT6 offers most of what the Escalade does, in terms of people and cargo-capacity, for tens of thousands less. It may not be able to pull as much – but that may not matter to you much.