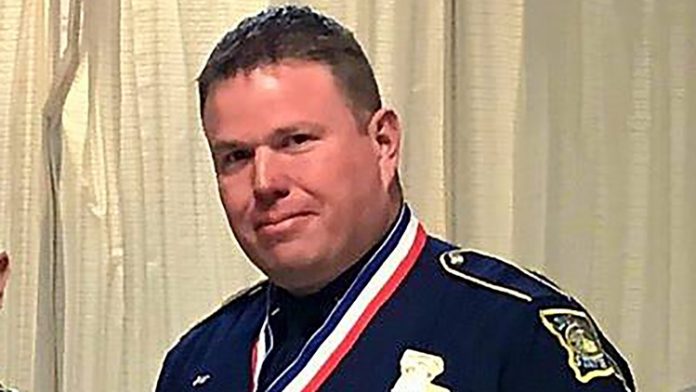 But he hasn’t been fired.

Boyet has been placed on “administrative leave” – and so is still at least technically an armed government worker. You know, just like any of us who were arrested for something this heinous would still be employed, too.

Of course, AGWs are employed by the government – which forces us to pay them. And we can’t “fire” them. The government decides when an AGW will be fired – and will force us to pay until he is.

And even after he isn’t – via the civil judgments and settlements arising from AGW abuse, which are always paid by the taxpayers, who had nothing to do with it.

He was also, of course, diddling the people of Louisiana, for which he received “Trooper of the Year” in 2018.

The announcement accompanying this honor read:

Senior Trooper Jason Boyet was recognized as the Louisiana State Police Troop L Trooper of the Year at the annual Slidell Elks Law and Order Night. When considering candidates, S/T Boyet’s supervisors highlighted his job performance, initiative, professionalism, and most of all leadership.

How many other victims of this AGW’s attentions are there? Arguably, every single person who ever had to deal with this predator with a badge.

As this column has previously suggested, in cases such as these, a remedy – and a deterrent – would be a policy that every single person issued so much as a fine for jaywalking by an AGW such as this one have their fines refunded and all charges dropped.

And that abusive AGWs be personally liable for any abuses committed while employed as AGWs. End the obnoxious practice of endowing armed government workers with qualified immunity for abuses they commit.

That’d be what you call a “nudge” – and this time, in the right direction.