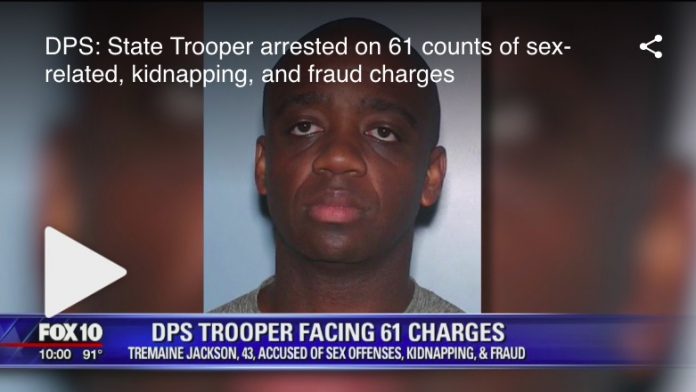 Mic was right: Every AGW is a criminal. This one, at least 61 times.

Tremaine Jackson, a 13-year “veteran” AGW in Phoenix, AZ, has been arrested and charged with 61 criminal counts, including sexually assaulting a woman stopped over a trumped-up traffic “violation.”

A statement released by the AGW’s department reads in part:

DPS officials said a total of eight women have come forward so far.

On Tuesday night, Jackson was taken to the 4th Avenue Jail before his first court appearance. He was booked on multiple counts of sexual abuse, attempted sexual abuse, sexual extortion, unlawful imprisonment, kidnapping, harassment, forgery, and tampering with a public record, among other charges.

So far, eight women have come forward with allegations, but with the timeline only starting last October, Jackson’s entire career with the DPS is being scrutinized.