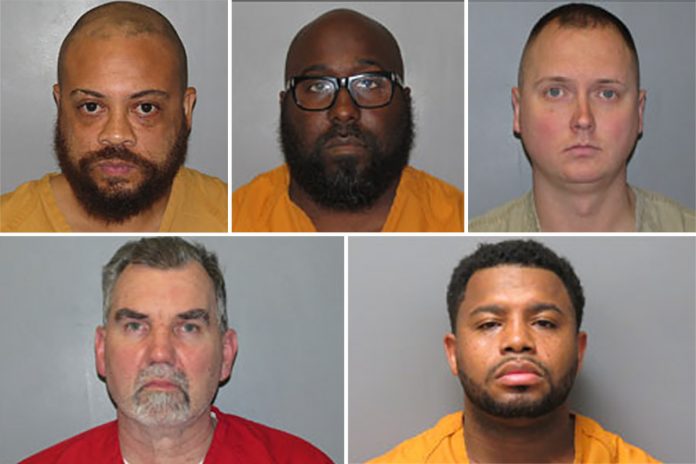 In the department of “we’re here to protect you”…

Four New Jersey corrections officers have been indicted for sexual assault against nine women at the Edna Mahan Correctional Facility for Women in Clinton, NJ. Corrections Officers Jason Mays, Ahnwar Dixon, Brian Ambroise, and Thomas Seguine were all indicted by a Hunterdon grand jury for engaging in ongoing sexual abuse of inmates over the course of two years. All told, they are facing 26 charges between them.

A fifth man, Joel Herscap, previously pled guilty to official misconduct for engaging in a “sexual encounter” with an inmate. He was subsequently sentenced to three years in prison. Herscap worked as an institutional trade instructor at the prison prior to being arrested.

The rape culture at a New Jersey women’s prison has continued.

Hunterdon County Prosecutor Anthony P. Kearns III announced at a press conference Monday morning that two more senior corrections officers were charged with rape at the Edna Mahan Correctional Facility in Clinton. That brings the tally to a total of five male employees, including four corrections officers, charged with the sex assault of nine female inmates at Edna Mahan over the past year.

“In these cases, the victims were particularly vulnerable as inmates,” Kearns said. “The corrections officers had complete power and control over every aspect of their lives behind bars.”

Kearns did not provide specifics of the recent arrests.

In February, another senior corrections officer was arrested for allegedly having sex with a female inmate. Thomas Seguine Jr., 34, of Phillipsburg, was charged with official misconduct and sexual assault.

Then three months later, a kitchen worker at the jail was arrested for reportedly exchanging cigarettes with two female inmates in return for sexual favors. Joel Herscap, 55, of Alpha, was charged with two counts of second-degree official misconduct, two counts of second-degree sexual assault and one count of fourth-degree criminal sexual contact. Kearns said Herscap was recently sentenced to three years in jail on an official misconduct charge.

In October, Brian Y. Ambroise, 33, of Union, engaged in a sexual relationship with an inmate at the prison, authorities said, and was charged with official misconduct and sexual assault. The senior corrections officer was arrested following a joint investigation by the Hunterdon County Prosecutor’s Office Special Victims Unit and the New Jersey Department of Corrections Special Investigations Division.