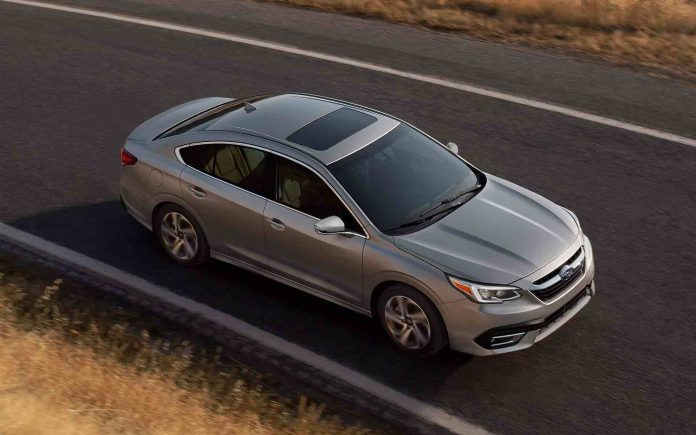 How much can buying a trunk save you?

The only things you get less of for your money are cargo room – and ground clearance. Which may matter less to you than the $4k you didn’t spend to get them.

The Legacy is the sedan version of the Outback wagon – or the reverse, depending on how you view it.

It’s also the only large sedan with a price that starts under $23k that comes standard with all-wheel-all-drive. Most of the sedans in the same-size range like the Toyota Camry and the Honda Accord don’t even offer it – and they cost more without it. 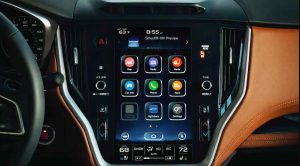 That said, the Legacy is still the most affordable large sedan with standard AWD on the market.

The Legacy gets a major makeover for 2020, including new bodywork, an updated interior with a huge (11.6 inch) LCD touchscreen and a new new optional turbocharged four cylinder engine, which replaces the old Legacy’s optional six-cylinder engine.

The standard engine gets a little stronger, too.

An Outback without the Outback price.

Large, easy to use LCD touchscreen.

Powerful optional 2.4 liter engine is restricted to the pricey Limited and Touring trims.

Sedan’s trunk has about a third the space of the wagon’s cargo area.

Unpleasant (and unavoidable) Auto-stop/start is standard. 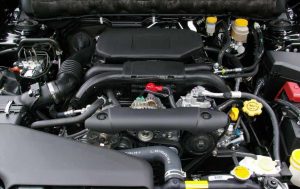 The new Legacy comes standard with an updated version of the previous Legacy’s standard 2.5 liter horizontally-opposed four cylinder engine – now making 182 horsepower vs. 175 horsepower last year. As before, it’s paired with a continuously variable (CVT) automatic transmission and Subaru’s “symmetric” all-wheel-drive, so-called because the boxer engine is exactly half on one side of the car’s centerline and the other half on the other side.

Interestingly, this very high-compression engine (12.0:1) is optimized to burn 87 octane regular gas. Usually, an engine running a CR that high would require high-octane premium and for this reason high-CR engines used to be found only in high-performance cars – because people who bought them cared more about horsepower than the cost of premium. 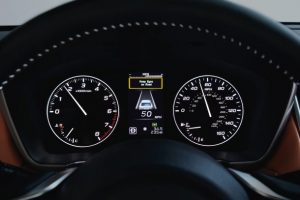 But high-compression is also efficient; if you can rig an engine to have higher cylinder pressure it will burn less gas, too. The trick is to do that without requiring the high octane gas so that you can get the benefit of better efficiency without the cost of unleaded premium.

Another thing Subaru did was to add a port fuel-injection circuit to address any potential carbon-crudding issues that might have arisen as a result of using direct injection to fed the engine (the DI makes possible the high CR without the high octane).

The previously optional 3.6 liter horizontally opposed six cylinder engine unfortunately no longer is. Its place has been taken by a turbocharged 2.4 liter engine that has two fewer cylinders but makes more horsepower – 260 vs. 258 previously – and matches the old car’s performance while delivering better gas mileage, which increases to 24 city, 32 highway vs. 20 city, 28 highway previously. 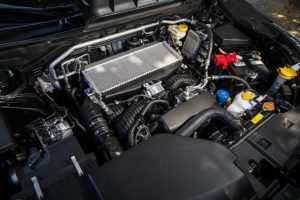 This engine – also designed for 87 octane regular unleaded – is also paired with the CVT and AWD.

Both engines are also paired with ASS – automated engine stop/start. It’s like opting for a an-car paint shaker except it’s not optional. And it’s almost that bad. Some ASS-equipped cars (which is almost all new cars – thanks to Uncle) stop and re-start their engines such that you almost don’t notice it.

The Legacy’s system is hard not to notice.

Which is probably why you’re not allowed to avoid it. 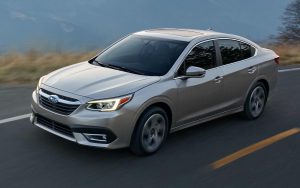 The Legacy isn’t as speedy as rivals like the Camry and Accord but they can’t rival its tenaciousness – because they don’t even offer all-wheel-drive.

But the payoff is more sure-footed high-speed stability vs. the Outback combined with higher cornering grip than its FWD-only mid-size sedan rivals.

Another thing the Legacy has is legs. It can travel 647 miles on 18.5 gallons of gas (with the 2.5 liter engine). This is comparable to the range of no-longer-available diesel-powered cars like the (RIP) VW Passat and Jetta TDI – which got RIP’d for cheating on government emissions certification tests. 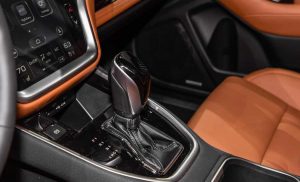 Something else the Legacy has is shifts – which is strange – because CVT automatics don’t have gears. The whole point of the CVT is to continuously vary the mechanical ratio between the engine and transmission and final drive for maximum efficiency at any road speed.

A conventional automatic’s gears (whether 1-6 or 1-10) are each of them a compromise ratio with the in-between gears kind of like the open spots you jump over when crossing a creek by jumping from rock to rock. That’s why cars with geared automatics usually use a bit more gas than the same car with a CVT. And that’s why so many new cars come with CVTs.

But, many people dislike the shift-less feel of the CVT; so Subaru designed its “Lineartronic” CVT to emulate shifts – eight of them, which you can shift for yourself using steering wheel mounted + and – paddle shifters. 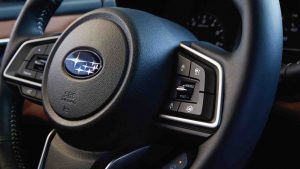 The difference is there’s no shift shock when you change “gears” – because there are no gears meshing and unmeshing. The revs are held – and released – as at each transition, which gives the impression of the transmission shifting.

But it doesn’t really.

The upside is a more “normal” feel – and higher MPGs.

The downside is that CVTs aren’t as responsive as geared automatics, though this is much less noticeable than when CVTs  first began to appear back in the late ’90s. And part of this is due to the engines CVTs are paired with today. 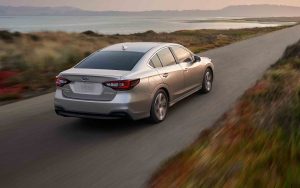 They aren’t underpowered. Even the Legacy’s base engine. It may be less powerful than the Soobie’s optional engine – and relative to other engines that are available today. But it’s still making just shy of 200 horsepower, which for some sense of things is about as much power as the most powerful V8s were making in the early ’80s and much more powerful than the heaving, tuburcular fours that were paired with the first-gen CVTs of the late ’90s and early 2000s.

For example, a late ’90s Honda Civic paired a gaspy 115 hp engine with its first gen CVT and the result was lots of noise because the engine had to be kept floored almost constantly just t keep the thing moving. The CVT enhanced this noise because it kept the revs high as long as you kept your foot down.

Those problems largely no longer exist because there’s sufficient power to get (and keep) the car moving without having to keep the pedal to the floor – and the engine revving near redline. 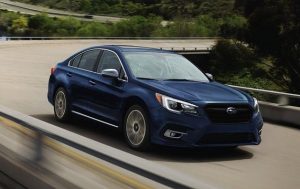 One other thing worth mentioning that’s different is the Legacy’s ride – which is softer than most of the others in the class, which emphasize sportiness. And they are – more so than the Legacy, which is clearly tuned for an easier-going pace. There’s nothing wrong with either, of course. But it’s nice that the option to choose is available in this case.

The others in the class try too hard to be like each other. 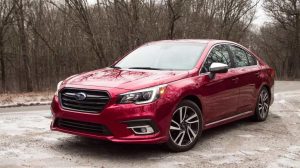 The new Legacy – like the new Camry and Accord – has been restyled with an eye toward making it more appealing to the eye, to make up for the sedan layout not appealing as much to people’s sensibilities – the main appeal of wagons like the Outback.

And it’s a bit more practical than before. A slight increase in overall length – 190.6 inches now vs. 189.1 before – carves out about an inch more backseat legroom than before (39.5 inches now vs. 38.1 previously). 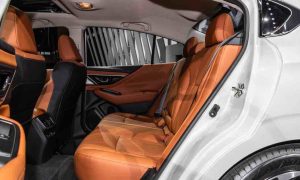 However, trunk space – 15.1 cubic feet – remains about the same. It’s comparable to other sedans in the class like the Camry (also  15.1 cubic feet) but can’t compare with the Outback’s 32.5 cubic feet – which more than doubles to 75.7 cubic feet when you lower the back seats.

The Honda Accord noses ahead a bit here, class-best backseat legroom (40.4 inches) and a full-size car’s 16.7 cubic foot trunk.

Something else that’s different about the Legacy is its seat heaters, which also heat your shoulders. Most other cars that offer seat heaters warm your buns – and your back.

The car is also available with something you may have a differing opinion of called Driver Focus Distraction Mitigation – which is no easy thing to say out loud correctly on the first attempt. It used facial recognition tech to keep track of your eye movements. If your eyes wander from the road, the car scolds you with a chime and yellow warning screen that pops up in the center of the main gauge cluster.

Is it a gimmick – or sound? 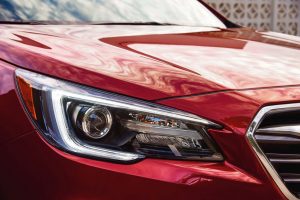 It depends. Some people can probably glance to the left or right without taking their eyes off the road and in such cases, being beeped at is itself a distraction. But some people may benefit from a little correction.

And the good news is you can choose whether to buy your Legacy equipped with it – or not.

Unlike ASS, which comes standard in every trim.

One other thing the Soobie offers that many buyers will probably want is the available Steering Responsive turns-with-the-wheel headlights. This isn’t a gimmick. It absolutely increases what you see – and sooner. 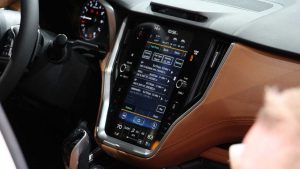 Almost all new cars have LCD touchscreens but only a few have touchscreens as large as the Legacy’s optionally available 11.6 unit – which occupies most of the center stack. The size addresses the main weakness of the touchscreen interface, which is that it’s sometimes hard to see – and accurately touch – the usually small icons for the various functions.

Arguably, touchscreens ought to all be this large – so as to reduce  the problem of drivers squinting at and fumbling for the right icon as they hurtle down the road at 70 MPH.

The new Legacy goes almost anywhere the new Outback can – for less.